Once again, Australia has hit a new record with a total enrolment of 624,000 foreign students in 2017. This represents a 13% increase over the previous year, according to the Australian Department of Education and Training (DET), and compares to average growth of roughly 4.5% per year over the previous decade.

Close to 200 nationalities are represented in Australia’s international student population. Of the total, more than half (53%) of all international students in the country come from five sending markets: China (30%), India (11%), Nepal (5%), Malaysia (4%), and Brazil (4%).

Meanwhile, the secondary school sector accounted for 3% of students (up 11%) and non-award programmes such as exchange and foundation programmes claimed 6% (up 14%). 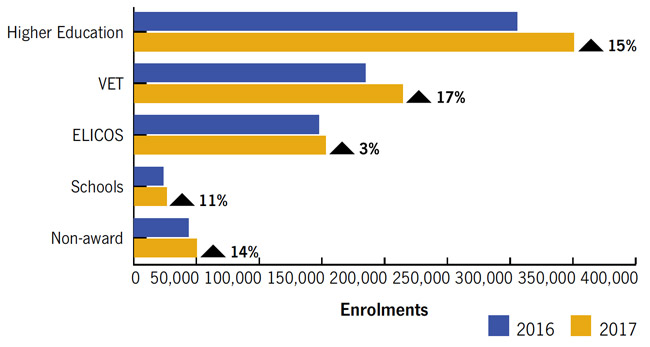 International student enrolment in Australia by sector, 2016 and 2017. Source: DET

The dynamics of growth

The surge in Australia’s foreign student numbers over the past several years is positive news overall, but some sectors and institutions have attracted a disproportionate share of the growth. For example, four of the Group of Eight institutions in Victoria and New South Wales (Monash University, University of Melbourne, University of Sydney, and University of New South Wales) increased their market share from 18% to 22% between 2010 and 2016. In the same period of time, growth in postgraduate enrolments (6% per year on average) also outstripped that of undergraduate enrolments (1%) – a sharp reversal of the picture in 2010, when the number of international undergraduates in Australia doubled those studying at the postgraduate level.

It is a question every institution with ambitious international enrolment goals has to ask: are our programmes too exposed to risk given their reliance on Chinese students? In Australia, 3 in 10 international students are now Chinese, and China contributed 40% of year-over-year growth from 2016 to 2017 alone. But this is not much different than the picture over the past couple of years. The International Education Association of Australia (IEAA) notes that “the reliance for Australia as a whole has only increased from 37% to 41% of onshore year-to-date commencements from 2014 to 2017.” They conclude that,

“In short, it is the large reliance on China to begin with that is driving the continued reliance. It is worth noting that over the same period, reliance on students from India also followed a similar trend, increasing from 13% of commencements in 2014 to 16% in 2017.”

Under the SSVF, the greater the number of students who are denied visas, the greater the chance that an institution will not maintain its immigration risk rating. Therefore, when it appears that students from a certain market are experiencing high rates of visa rejection, it follows that institutions become wary of recruiting there.

For its part, Austrade projects that China and India will remain the top sending markets for Australia through 2020, but it forecasts a different mix of leading senders otherwise, with Pakistan, the Philippines, and Indonesia rounding out the top five, and Bangladesh entering the top 10 for the first time.

Australia’s English-language sector (ELICOS) posted modest overall growth (3%) relative to the other education sectors, and in the last half of 2017, booked actual declines for the first time in a decade.

Pride in the accomplishment

With international student numbers finally restored to levels not seen since 2010, Australia’s higher education providers are expressing confidence in the current situation and path going forward. Universities Australia’s Chief Executive Belinda Robinson said that international students “are choosing to come to Australia in record numbers for a world-class higher education, the lifestyle, and our safe and welcoming communities.” She adds that,

“Behind the statistics are more than half a million stories of students forging a personal connection with Australia, and who we hope will gain new familiarity and great affection for our country. Those people-to-people links are so important for Australia’s relationships in the region, and it gives Australian students the benefit of a truly global perspective in their education.”

For his part, education minister Simon Birmingham noted that,

According to Universities Australia, the Australian international education sector generated more than AUS$30.9 billion (US$24.4 billion) in export income in 2017.