In a further indication of a flattening enrolment in the US, a new report suggests that both international undergraduate and graduate numbers in US institutions declined between 2016 and 2017. The latest figures appear in the National Science Foundation’s (NSF) Science and Engineering Indicators 2018, and they draw on current data from the US Immigration Department’s Student and Exchange Visitor Information System (SEVIS).

In its regular SEVIS by the Numbers reports, ICE provides an interesting benchmark for foreign enrolment in the US. We’ve referenced this data in the past and the usual cautions apply when comparing SEVIS values against data from other sources, most notably the Institute for International Education’s annual Open Doors report.

A key difference in this respect is that the SEVIS system is web-based and its reports are based on real-time data that provides a snapshot of active international students in America as of the report date. Further, the SEVIS data casts a wider net to provide a more comprehensive view of foreign enrolment in the US. Open Doors is based on a survey of 3,000 accredited higher education institutions and so the focus is on those enrolled in academic study at US colleges. In contrast, SEVIS data reflects all levels of education, including primary and secondary school enrolments.

The most recent Open Doors report found only marginal growth in foreign enrolment in the US for 2016/17. And, as we reported at the time, nearly all of the growth for 2016/17 can be attributed to increased participation in the Optional Practical Training (OPT) programme (OPT allows international students to stay and work in America for up to 12 months following graduation, or up to 36 months in the case of STEM graduates).

However you look at it, Open Doors shows clearly that year-over-year growth was notably slower in 2016/17. Further, the report finds that both international commencements in the US fell last year, at both the undergraduate and graduate levels, for the first time in 12 years.

The NSF analysis takes this a step further still by isolating F-1 visa holders (that is, those enrolled in higher education institutions for long-term degree study). It again finds that after years of steady growth, total foreign enrolment in US higher education dipped from 2016 to 2017. As the following table reflects, total international enrolment (that is, both undergraduate and graduate) fell by nearly 4% last year. Undergraduate numbers dipped by just over 2%, and graduate enrolment fell off more sharply with a nearly 5.5% decline. 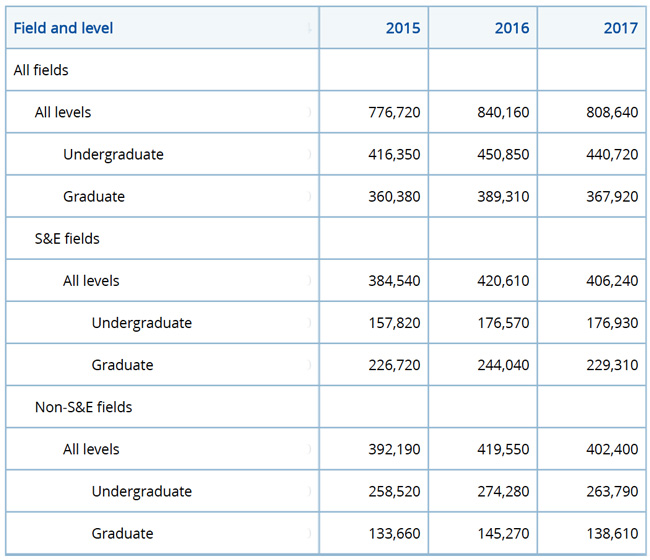 As the table also reflects:

Also of note: foreign enrolment in US graduate schools is highly concentrated in terms of sending markets, with nearly seven in ten students coming from either China or India. Along that line, the NSF analysis more or less tracks with the Open Doors findings in terms of broad year-over-year shifts in major sending markets. In short, the softening enrolment outlook for 2017 has much to do with slowing growth from the massive Chinese market paired with a dramatic decline in Saudi numbers (on the order of 15% or more).