Japan well on its way to 300,000 international students

For the fifth consecutive year, international student numbers have grown in Japan. The latest statistics from the Japan Student Services Organization (JASSO) indicate that as of May 2017, 267,040 foreign students were studying in Japan, an increase of 11.6% over 2016.

As the following chart reflects, the majority of visiting students (188,385) were studying in higher education institutions – a 10% increase over 2016 – with 78,660 in language courses (up 15.5% over 2016). Of those international students in higher education, the majority were in undergraduate programmes (80,020), while 58,770 were in specialised training programmes and 46,370 were in graduate studies. 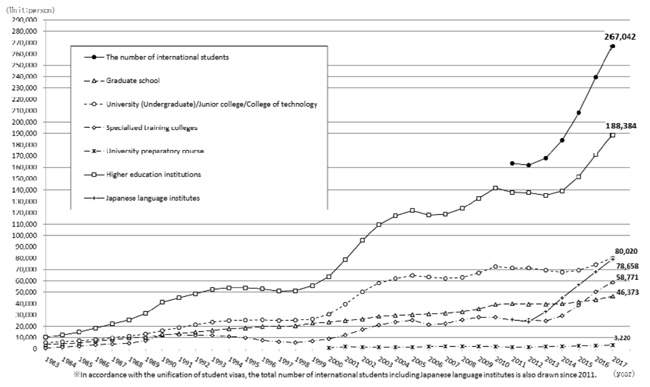 Cumulatively, from 2013 through 2017, the growth rate of international students in Japan is just under 60%, which averages out to roughly 12% per year. At this rate, Japan is well on its way to achieving its long-standing goal of hosting 300,000 students by 2020, and may in fact reach that target by late 2018 or early 2019 assuming the growth trend continues.

China and Vietnam continue to be the major senders of international students to Japan – though there has been significant growth stemming from several other markets including Sri Lanka, Indonesia, and Myanmar – and all the top ten source markets for Japan are within the Asian region.

Taiwanese students increased to 8,950, a rise of 7.7%, but the most notable growth stemmed from Sri Lanka: the roughly 6,610 Sri Lankan students now studying in Japan represent a 66.7% increase over 2016.

Japan’s success in increasing its foreign enrolments is due to a number of factors, but particularly interesting has been the country’s astute understanding that international students put employability high on their list of goals when they decide where to study. The Japanese government has for some time been supporting subsidised company internships, help with finding jobs on graduation, additional Japanese language courses, and more streamlined processes for work visas to international students.

As of January 2017, there were roughly 1.5 jobs in Japan for every applicant, meaning that foreign graduates are increasingly in demand as a new source of talent.

Along with its goal to reach 300,000 foreign students by 2020, the government also has a target of raising the employment rate for its international graduates to 50% by 2020.

The Japanese economy has been on a steady upswing, with GDP rising by 2.5% in the July–September 2017 quarter, the seventh consecutive quarter of growth and, according to Nippon.com, “Japan’s longest quarterly growth streak since the government began compiling comparable statistics in 1994.” There is speculation that renewed confidence among investors and small and medium businesses combined with the demand for skilled workers to fill jobs will raise wages. If so, it will be yet another reason for students from within the Asian region to consider Japan as a study destination.

The drive to internationalise

These rankings are consistent with a strategy launched in 2014 by the government to internationalise 37 of its more than 700 universities: the Top Global Universities Initiative. The initiative’s goal is to increase Japan’s global competitiveness and collaboration with other leading economies, and its funding carries through to 2024.

Suffice it to say, if Japan achieves its goal of 300,000 international students by – or even before – 2020, it will be no accident, but rather the result of a highly integrated strategy that promises both academic and employment benefits for its international graduates.