In recent years, the International Association of Language Centres (IALC) has published a series of studies that contribute to our understanding of the global language learning market. The latest of these is the IALC Study Travel Research Report 2017, and is entitled The student perspective on language study abroad: Student expectations, experiences and satisfaction.

The study was released this week at the ICEF Berlin Workshop and it reflects the findings of a global survey that gathered 4,755 responses from 136 countries. The survey was conducted from January to March 2017, and all respondents were current or former students enrolled at one of 140 IALC member centres.

One of the top-line study findings is that the vast majority of responding students relied on three main sources of information when searching for a language school.

As the following chart reflects, nearly one third (32%) said that the school website was their primary source of information. Another 26% cited local education agents (that is, agents operating in the student’s home country) as their main source. And about 20% relied on recommendations and advice from friends or family to guide their choice of school. 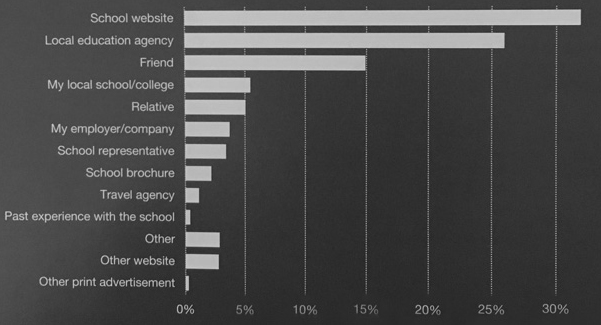 The main sources of information for students selecting a language school. Source: IALC

Aside from the great importance of the school website, the main observation that can be drawn from the chart is that a majority of students rely on indirect sources of information. As the study notes, “With less than 40% of students actually utilising school-produced resources as their main source of information, it is imperative for schools to safeguard the flow of information to the end-customer.”

The survey also indicates some variation in information sources by student age. Younger students, for example, were more likely to rely on local education agents as their primary source of information. As students age – from about age 25 and older – the mix gradually shifts to a greater reliance on direct information channels, and the school website in particular. Recommendations from friends also played a more prominent role with older students.

As its title suggests, student expectations are a focal point of the study and the findings reflect both how the students’ experiences matched their pre-arrival expectations as well as how well their expectations were met overall.

Some aspects of pre-arrival information – notably the use of technology in the classroom, the nationality mix in the school, and the number of extra-curricular activities and excursions – were more likely to be the subject of misaligned expectations. In each of these three areas, roughly 10–12% of respondents indicated the information they received in advance was inaccurate.

The survey also asked students how well their expectations were fulfilled across 20 different aspects of their language programmes. These ranged from school atmosphere to teaching to school facilities and accommodations.

On the other side of the coin, as the report notes, “If the research intimated any opportunities for possible improvement, these were largely tied to out-of-class activities. Students also anticipated more value in making friends in the country of their study, opportunities to practise outside class and nationality mix.” Accommodation was another area of wider concern with one in five respondents indicating that they would opt for a different accommodation option if they had it to do over again.

When asked to rate their satisfaction with their progress in building their language skills abroad, most students reported making more progress than expected.

“Students acknowledged the most significant progress in their listening comprehension, which closely aligns with being immersed in a native environment,” observes the study report. “The second strongest improvement concerned their reading skills. The research therefore suggests that language study abroad primarily caters to students’ abilities that drive a better understanding of the foreign language. The interactive nature of the learning process was also demonstrated by improvement in writing skills and grammar, which though at the low end of the spectrum, were still assessed as ‘progress slightly more than expected.’”

In the final analysis, 93% of respondents said that they were satisfied with their experience of language study abroad, with 47% reporting greater satisfaction than expected. Nearly nine in ten respondents (88%) said that they would choose the same language course again, and 94% would recommend their school to a friend. This, IALC points out, is a compelling marketing tool in itself. “Due to the strong word of mouth tradition in the industry, the importance of satisfied students who can be effectively brought on board to become brand ambassadors is even more significant.”