The 7th annual EF English Proficiency Index (EPI) was released earlier this month. As in previous years, the EPI ranks the proficiency of non-native-speaking countries around the world – the field has expanded to 80 this year – based on a global sample of EF Standard English Test (SET) test takers.

This year, the sample is larger than ever with the rankings based on more than a million completed language tests. Also new for 2017, the index features several additional African countries for the first time: Angola, Cameroon, Nigeria, and South Africa.

The following chart describes the broad picture of English proficiency at a regional level. Europe remains at the top of the regional table again this year, with Asia close behind, Africa and Latin America in the middle of the pack, and the Middle East lagging well below global averages.

Needless to say, these regional ratings tend to obscure significant proficiency gaps within a given region. Within the European band, for example, we find the global leader – the Netherlands – with a country score of 71.45. And then well at the other end of the spectrum is Azerbaijan, which is solidly fixed in the “very low” proficiency band with a score of 46.97.

Similarly in Africa, regional leader South Africa tops the table at 63.37, with Libya again in the “very low” band with a proficiency score of 38.61.

It is tempting at this point to start poking holes in the study methodology. By design, the test samples are not representative of the wider populations of each country. Rather, the survey participants are self-selective and take the EF test voluntarily. While EF requires a minimum sample size of 400 respondents in order to include a country in the index, sample sizes vary from one to the next and this further influences the overall rating for each.

But take those more as caveats for reading the results than anything else. The EPI is still an impressively large and standardised effort to gauge relative English proficiency. Indeed, one of its more important effects may be to provoke discussion about the progress of countries and regions in building English proficiency over time.

In this regard, the 2017 EPI makes some interesting observations about the different approaches that countries around the world are taking to build English proficiency. As in earlier editions of the index, EF finds strong correlations between English proficiency and income levels and economic growth, adoption of technology, research and innovation, and other important social indicators. And it is these findings that essentially underpin the massive investments in and policies for promoting English proficiency among their citizens. 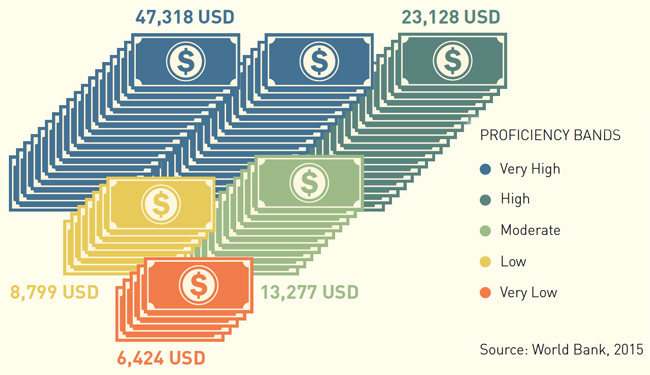 The relationship between English proficiency and individual earning power (via Adjusted Net National Income per capita) for the countries in each EPI proficiency band. Source: EF

EF looks closely at 20 such initiatives in this year’s report and summarises the different approaches they reflect:

“Every year, countries spend billions to improve their citizens’ English proficiency,” concludes the EPI report. “Mastering a foreign language takes years, if not decades, and there is no one-size-fits-all approach.”

“The global adoption of English is not a testament to the cultural supremacy of any one country, but rather a reflection of the need for a shared language in our deeply interconnected world.”