The global strength of the British education brand is showing this year with record-high application volumes and acceptances for non-European Union students in 2017.

However, the latest data release from the Universities and Colleges Admissions Service (UCAS) paints a mixed picture in also highlighting a drop in EU and domestic enrolments in British higher education.

UCAS is starting to roll out its full-year data for 2017 and the initial release, published earlier this week, will rekindle concerns around the impact of the ongoing Brexit process.

In terms of application volumes for the year, UCAS reports a 3.1% decline in applicants from the UK (this works out to 18,220 fewer applications compared to 2016). Of particular note to international educators, applicants from the EU also declined by 4.4% year-over-year (the equivalent of 2,375 applications). This, UCAS points out, eroded much of the growth in EU application volumes recorded in 2016. Perhaps more notably, it reverses a growth trend that has persisted since 2012, which was the last year in which EU numbers fell off. “Between 2012 and 2016, the number of EU applicants increased by between 4% and 8% each year,” says UCAS. “Had that trend continued into 2017, applicants from the EU would have been around 10% higher than observed.”

But as the following chart illustrates, applications from outside the EU increased by 2.8%, or 2,090 applicants, in 2017. This marks a new record-high for application volumes for non-EU students, and reverses a dip in volume from this important group in 2016. 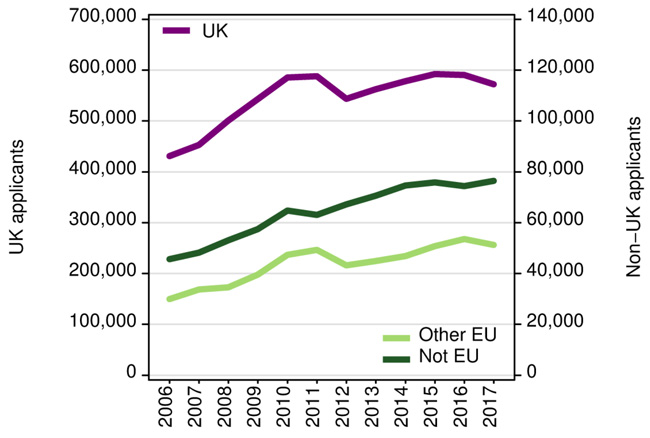 The number of acceptances granted by British universities followed a similar pattern in 2017: UK and EU numbers were down against an increase in acceptances for non-EU applicants.

The number of acceptances granted to British prospects fell by .5% this year, and by 2.1% for EU students from outside the UK. As with the trend for application volumes, this decline in EU acceptances reversed a four-year growth trend dating back to 2012.

Also following the non-EU trend line, acceptances to prospects from outside the EU rose by 5% (or roughly 2,000 students) compared to 2016. This growth effectively offsets (and then some) a 2.3% decline in non-EU acceptances in the previous year, and establishes a new record level for non-EU admissions. 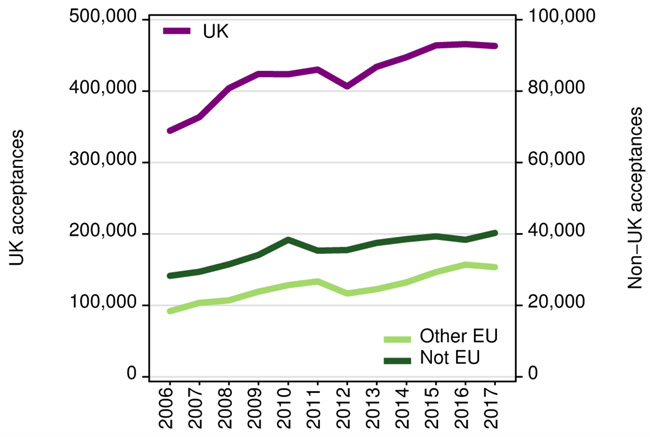 But if that bright spot regarding non-EU trends reflects the global strength of the British education brand, the reversal in EU application and acceptance volumes is also giving some stakeholders pause this year. Universities UK Chief Executive Alistair Jarvis said, “The small fall in EU students suggest that Brexit is starting to deter EU students from coming to the UK.”

In a comment to The Telegraph, a UCAS spokesperson added a little more context, “The number of applicants from the EU in 2017 is the second highest on record. However, this is a decrease of 4.4% from 2016. This may be related to the uncertainty around the UK’s withdrawal from the EU.”

Even so, taking EU and non-EU volumes together the combined number of acceptances for foreign students rose by 1.8% (or about 1,250 students). This marks the fifth consecutive year of growth in acceptance volumes for visiting students in the UK, and again a record-high.

Early UCAS data for the 2018 admissions cycle provides some further grounds for optimism. The compiled data for the initial admissions deadline of 15 October shows a 6% increase in EU applicants, which, as UCAS points out, reverses “much of the 9% fall seen at this point in the 2017 cycle.”

Also of note, non-EU applicants in this initial cycle for 2018 are up 12% this year.

The 15 October admissions deadline in the UK pertains to an admittedly small proportion of programmes on offer, as it pertains to medicine, dentistry, and veterinary medicine/science courses, as well as all programmes at the universities of Cambridge and Oxford. That said, it is still an interesting and early indicator of 2018 enrolment trends that we will continue to follow closely as UCAS reports on actual application and acceptance volumes for the year ahead.