What rankings are most important to students?

It has long been held that global university rankings are important to students, and that, particularly in some markets, they play a significant role in student decision-making for study abroad. This is partly why rankings occupy a prominent spot in the imaginations of recruiters, and why they remain a subject of enduring interest and debate in international education circles. However, this understanding has been tempered in recent years by new insights into the factors that drive student choice.

And from time to time we get more specific insights into how students look at international rankings. In 2015, for example, a QS study highlighted student demand for more in-depth comparisons – that is, beyond what conventional ranking schemes are able to provide. The same study also clearly demonstrated that when students look at rankings, they are often looking for indicators of employment outcomes. The underlying ranking scheme has a role to play in this in that a better-ranked institution, for some students, translates into a more compelling addition to one’s CV or allows the student to leverage a positive perception of the institution on the part of employers.

Even so, the overall impression you get from such studies is that students are drilling harder into ranking methodologies, and are looking beyond the headlines into some of the more detailed findings, particularly with respect to subject-level rankings and graduate outcomes.

This suggests a more complex and nuanced context for international rankings today than we have seen in the past, and part of this complexity derives from the fact that there are more rankings and ranking models in play now than ever before. Any quick survey of the global landscape reveals competing global rankings, but also regional rankings, subject rankings, rankings of “young” institutions, and more.

With all of that going on, we might well ask: how do students look at the different ranking schemes and which ones are most important to them?

This question found its way into Hobsons’ 2017 International Student Survey (ISS). The survey is notable in part for its scale and reach, and Hobsons was able to compare responses from a sample of just over 34,000 prospective international students over the last three years.

The obvious flip side of these top-level findings is that rankings play a less significant role for a majority of prospective students. Absent a high-level ranking, institutions can still expect to attract students on the basis of other indicators with respect to graduate outcomes, teaching quality, and student experience.

With that caveat firmly in place, the ISS provides an interesting window into the most-popular rankings among prospective students. The survey finds in particular that the QS World University Rankings and THE World University Rankings have increased in popularity over the last three years. The QS Rankings’ move up the chart stands out in the following illustration as it has advanced from being the third most-popular in 2015 to the leading choice among prospective students this year. 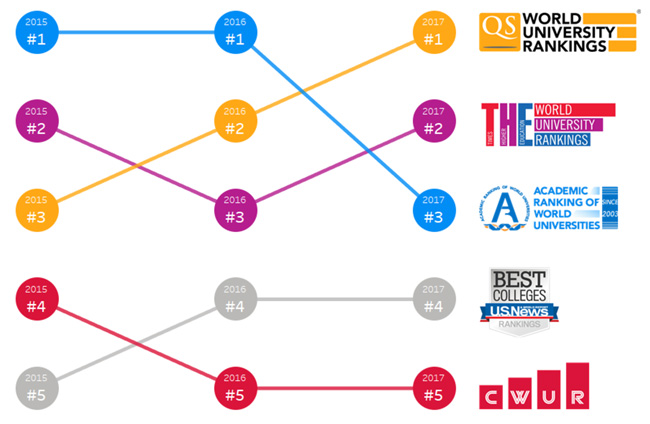 In addition to that overall table, the ISS results also looked at student preferences in major sending markets, notably China and India, and there too QS was rated as the most-popular ranking scheme in both cases.

An accompanying commentary from Hobsons adds that, “While we believe that factors such as teaching quality and a sense of welcome…will continue to be the biggest influences on international student decision-making, rankings are an important feature of the international higher education landscape for many students and their preferences are changing…it’s important to be aware that levels of usage of different rankings is not uniform throughout the world, and choice of rankings is subject to change over time.”