A new report from the Institute of International Education (IIE) highlights that the number of international secondary students in the US more than tripled between 2004 and 2016.

Globally Mobile Youth: Trends in International Secondary Students in the United States, 2013–2016 estimates that there were just under 82,000 foreign students in US schools as of fall 2016, with most seeking a US high school diploma in preparation for university study in America.

The four-year trends for both major visa types are summarised in the chart below, and clearly reflect an overall flattening of enrolment growth. 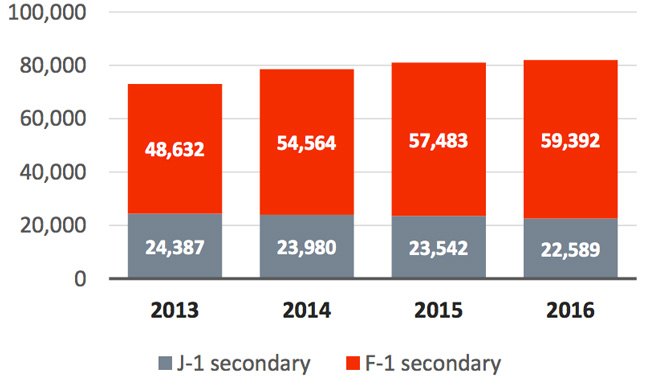 Not surprisingly, China has been an important driver of secondary enrolment growth in the US over the past decade and this remains the case today. But this is also what makes any notable slowing in Chinese enrolment growth especially notable. As the following chart illustrates, the numbers of Chinese secondary students are so significant that any flattening of demand from China has an important effect in shaping the overall foreign enrolment in US high schools.

In fact, the top six sending countries for diploma-seeking students – China, South Korea, Vietnam, Mexico, Japan, and Canada – account for nearly eight in ten (78%) of F-1 secondary students in the US. And China alone accounts for nearly 60% of total enrolment. 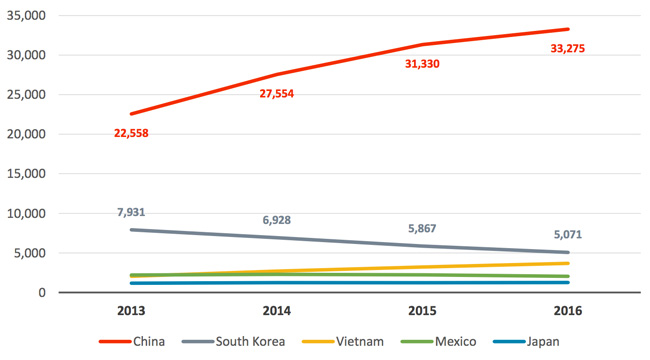 In this respect, the composition of secondary enrolment in the US, particularly with respect to diploma-seeking F-1 visa holders, very much mirrors the overall enrolment of foreign students in the US in the sense that there is a heavy dependence on a small number of source markets, and on China in particular.

The situation is somewhat different, however, when it comes to the roughly three in ten foreign high school students on exchange programmes (J-1 visa holders) in the US. Where nearly 80% of diploma-seeking students come from Asia, just under 70% of exchange students arrive from Europe. 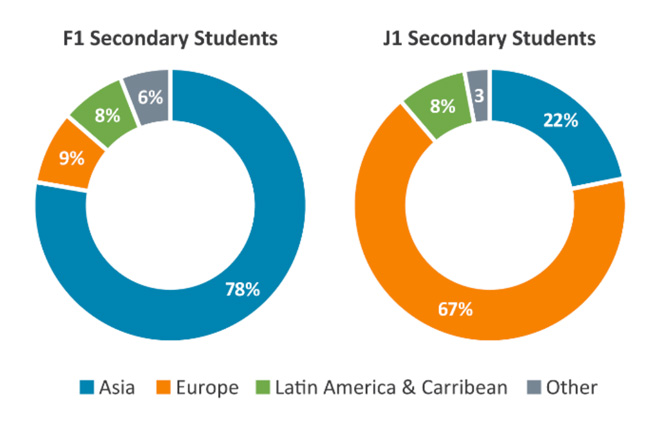 These latest findings carry some important implications for recruiters in the US. First, the overall scale of foreign enrolment in US high schools continues to grow, at least with respect to diploma-seeking students. This means that secondary schools will in turn continue to be an important pathway for higher education recruitment going forward, and perhaps increasingly so.

However, the flattening growth curve in secondary enrolment – especially with respect to China – along with the expanding field of schools hosting international students, means as well that competition will also increase. While not exactly competing for a shrinking pool of students, we now see a situation where there are more schools competing for a pool of students that is not growing nearly as quickly as it has in the past.

Even so, as IIE Head of Research Rajika Bhandari recently said to The Washington Post, “There’s a realisation that recruiting future international students to colleges and universities in the US is not just going to be about going overseas. A lot of them are actually right here in our backyard.”