The latest Universities and Colleges Admissions Service (UCAS) data shows a continuing downward trend in application volumes for the 2017 admissions cycle. As of the 30 June application deadline for programmes beginning this September, there were 4% fewer applications for UK higher education this year. 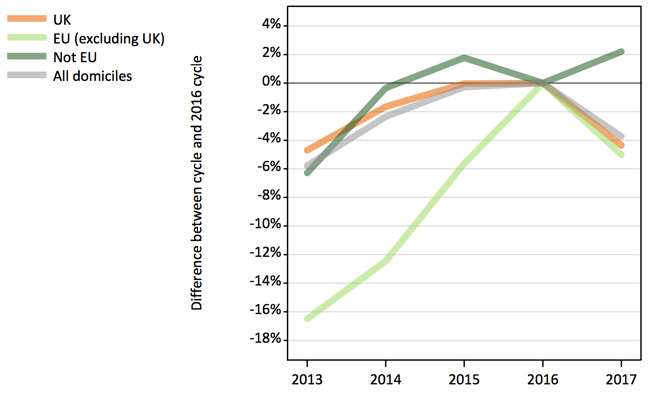 Representatives of British higher education responded promptly to the latest data release, including University Alliance Chief Executive Maddalaine Ansell who said, “While the small rise in the number of non-EU international students is welcome, this does not make up for the drop in applications from the EU. This reinforces the need for the most open arrangement possible as Britain leaves the EU so that those with the talent from overseas can continue to come here to study without facing barriers.”

“These figures confirm what we know already from UCAS about application figures for this year,” added Universities UK President Dame Julia Goodfellow. “We recognise there are a number of issues to address. Continuing to communicate to European applicants that they are welcome and enrich our education system is important.”

The 30 June application deadline effectively brings the main admissions period to an end, and UCAS reports a total of 649,700 applications filed for 2017. This amounts to roughly 25,000 fewer applicants than in 2016.

Prospective EU students accounted for 7.5% of the 2017 applicant pool, and foreign students from outside the EU another 11%.

UCAS Director of Analysis and Research Mark Corver said, “With the main application period at an end, the total numbers of people applying are down 25,000 on last year, around 4%. Within the figures, there are contrasting trends. The decrease in applicants is driven by falls from England, Wales and the EU, but applicants from other overseas countries are up 2%…How these trends translate into students at university and colleges will become clear over the next six weeks as applicants get their results and secure their places.”

This latest data extends the trends that we began to observe in UCAS application counts from earlier this year. Those earlier reports were based on application volumes for the main 15 January deadline for UK admissions. However, after 15 January, UCAS continues to send applications to British institutions up until 30 June. The admissions service reports that there were an additional 85,510 applications received between January and June this year, representing about 13% of all files for the 2017 cycle.

The 2% increase in non-EU applications for this year works out to just over 1,500 more applicants for 2017 compared to 2016. China, India, the UAE, and US were among some of the strongest gainers for this year, and drove much of that overall growth.

Those non-EU gains, however, were more than offset by a decline of 2,600 applications from students within the EU, with France, Germany, Ireland, and Italy some of the more significant falling markets for this year.