A new survey of US-bound international students finds a high degree of satisfaction among those who have used education agents. Findings from the survey were released this week, and reflect responses from nearly 6,000 students in more than 50 countries. The survey was conducted in March 2017 and published by World Education News & Reviews (WENR).

There are a few cautions that could be attached to the survey findings:

Even with those caveats in place, the WENR survey is an important contribution to our understanding of the student experience in working with agents. This is an underdeveloped area of research within international education, and, as a result, the student perspective figures less prominently than it should in consideration of the role of agents in international recruitment.

The report notes: “Overall, a significant majority of respondents across the globe (85%) indicated that they felt that compensation was essentially fair: They paid their agents for the services they used. That 83% of students were either satisfied or very satisfied with their agent’s services supports this finding.”

Why do students use agents?

The survey also found that lack of knowledge of the US education system and word of mouth recommendation (that is, a personal recommendation regarding the agency itself) were the key factors that led students to choose to the agency they worked with. Nearly three in four (73%) of respondents working with agents said the main thing they were seeking was “knowledge and expertise of US admission guidelines and education system.”

In contrast, the roughly 4,500 respondents who did not use agents largely felt that they had enough information to apply to study in the US on their own, in some cases with assistance from family or friends.

WENR notes the broad service offering within the agent space – ranging from school selection to application assistance to travel and immigration planning – and that agent usage is generally highest at the prospecting stage.

More than eight in ten (84%) of respondents who worked with agents relied on agents at this early stage of planning to help them choose the institutions they would apply to. “[The agent] provided me with necessary guidance, and educated me on the process,” said one respondent from India, a graduate student. “They did not make any false promises, and were upfront about telling me that my ability, profile and GRE score would make the difference, and that they had no role in the admission process. They were there to help me in making informed decisions.”

WENR attempted to measure the quality and integrity of agent services by asking students about the agent’s ability to recommend “best-fit schools based on [students’] interests and capabilities,” and also the agent’s ability to “provide current, accurate, and honest information throughout the process that enable them to make an informed choice.”

“Overall,” the report summarises, “more than 80% of respondents agreed that their agents recommended best fit schools, and that they provided current, accurate, and honest information.”

Satisfaction levels with agents’ knowledge and expertise were notably highest among those respondents working with institution-sponsored agents. WENR adds that this finding likely reflects that, “Institutions expect and demand some level of accountability from the agents with whom they have formal, contractual arrangements, and that they tend to keep those agents up to date on needed information; independent agents lack both contractual accountability, and easily available sources of information.”

As the following charts reflect, respondents also indicated that agents had a significant effect with respect to the students’ selection of institution and preparedness to study abroad. 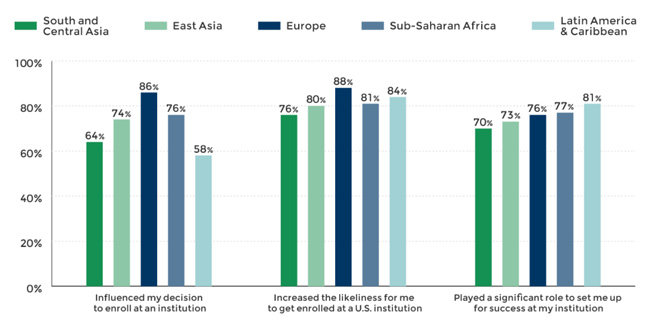 The impact of agents on student decision making. Source: WENR

In terms of student concerns, the survey results clearly highlight three, all of which, WENR notes, were “significantly higher for those who work with independent education agents”:

The “institution-sponsored” versus “independent” distinction is significant here. As WENR points out in the report’s conclusion, “Much of the conversation about education agents focuses on those who are institution-sponsored. However, our findings indicate that far the greatest percentage of students work with independent agents.”

The overarching conclusions of the report otherwise point clearly back to best practices for engaging with education agents, especially careful vetting of new agent contacts; effective support and monitoring of engaged agents; and an emphasis on transparency and accountability in all aspects of the institution-agent and agent-student relationships.

As such, the WENR survey stands as an important contribution to our understanding of the student experience in working with agents, and a valuable reinforcement of what are increasingly understood to be proven business practices and processes for institutions in engaging with education agents.