A new survey of South Asian education agents aims to gather new insights on this key sending region’s perceptions of Australia as a study destination.

The survey was conducted by PIER over April and May 2017. It drew 337 responses from agents across Afghanistan, Bangladesh, Bhutan, India, Nepal, Maldives, Pakistan, and Sri Lanka. However, the completed surveys were heavily weighted to India (which accounted for about half of all responses), Nepal, and Pakistan.

The newly released report, Perception of Australia: South Asia, is the first in a planned series that will gather agent insights from regions around the world. The region is a natural choice to start the series: South Asia is second only to East Asia among sending regions for Australia. And not surprisingly, India is Australia’s second-ranked source market, after only China, and accounted for more than one in ten foreign students enrolled in Australia last year.

As for the focus on agent perspectives, the report notes, “Education counsellors are significantly involved in student recruitment for Australian institutions. Currently, they come in contact with almost three-quarters of international students in Australia’s higher education sector.”

“Because of their role, education agents are in a unique position to provide insights into the strong and weak areas of study destinations. They see, in real-time, emerging trends and have an understanding of cultural and market contexts through which to interpret those changes. They also have contact with students many providers will never know: those that changed their mind before commencing the application process.”

The survey finds first and foremost that agents have a significant influence on student decision-making, with roughly half of South Asian students requiring agent assistance in selecting a study destination.

In other key observations:

“The results of the survey are pretty clear that Australia has been getting things right for South Asian students,” says PIER Managing Director Chris Evason. “Policy changes, such as the [simplified student visa framework, or SSVF], have contributed to the region’s agents viewing Australia more favourably than they did 12 months ago. It is important the country and its providers keep up the work to ensure South Asia continues to grow as a source market.”

Reflecting on the major survey findings, Mr Evason adds, “It was surprising to see how much the factors influencing South Asian countries fell in line with the rest of the world. India has for a long time been considered a destination primarily influenced by work opportunities during and after studies. However, the survey responses show destination marketing also has a significant role to play in attracting students to Australia.”

Looking ahead, the survey report identifies a number of areas for improvement for Australian educators looking to build market share in South Asia, including strengthened student services, improved information (both for destinations and programmes), and better responsiveness to student concerns.

By way of illustration, Mr Evason points to the SSVF rollout as an example of the need for clear and detailed information for both agents and students. “It was interesting to note that SSVF was a double-edged sword for Australia,” he says. “While there was significant positivity generated by the change in visa, there was also a level of negativity created due to confusions surrounding it. While the government has done a good job to address those uncertainties, it does highlight the importance of clear messaging from Australian stakeholders to agents to ensure negative perceptions don’t form in the first place.”

The PIER analysis includes a very instructive summary of enrolment trends for South Asian students, and underscores the important role of the region in overall enrolment patterns in Australia.

The report notes, “From 2009 to 2012, the number of students from South Asia halved, with Indian numbers further shrinking by almost 60%.”

“The collapse of South Asia sets it apart from other regions during Australia’s recent boom times. While Australia has seen three consecutive years of surpassing record student numbers, South Asia has not yet returned to its 2009 levels. Except for the Middle East and parts of Africa, which combined represent less than 25,000 of the over 710,000 total enrolments from 2016, South Asia is the only region significantly down seven years later. The region now sends 36,000 fewer international students to Australia than compared to 2009.” 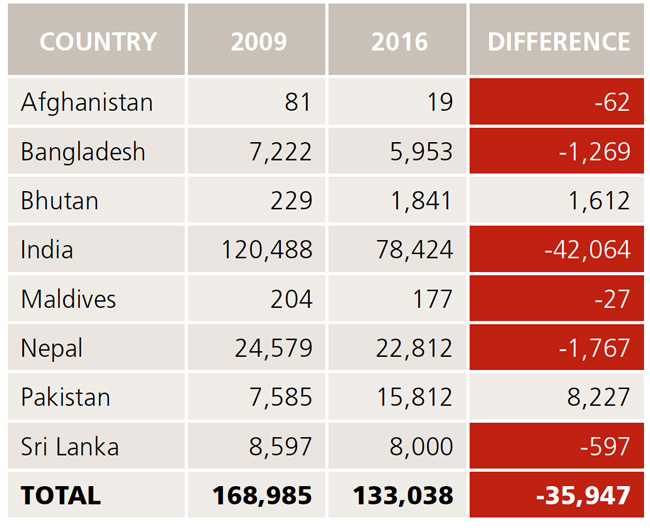 A closer look at these numbers reveals a couple of important developments. First, the fall-off in South Asian numbers between 2009 and 2016 was especially severe in Australia’s vocational education and training (VET) sector.

Total VET enrolment from the region declined from 110,000 students in 2009 to just under 40,000 in 2016. In other words, VET enrolment fell by nearly 70,000 students over those seven years, with India accounting for nearly three-quarters of that overall decline (a drop of nearly 51,000 students). This, the report notes, was largely due to “tightened visa conditions, which also decoupled migration from education as a response to high levels of fraudulent behaviour within the vocational sector.”

The sharp market response to such changes speaks as well to the importance of currently pending legislation that will further tighten regulations and oversight in Australia’s VET sector.

The countervailing trend in Australia’s South Asian enrolment is a distinct shift from VET to higher education. The major decline in VET numbers between 2009 and 2016 has been substantially offset by growth in higher education enrolments, particularly from India, Nepal, and Pakistan. 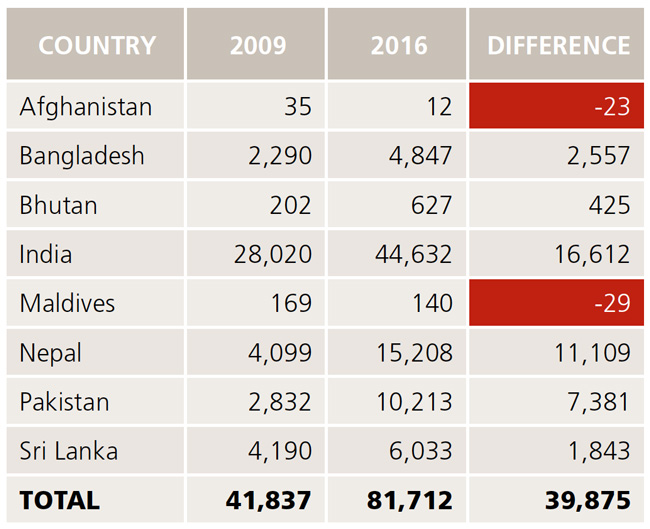 This growth in higher education has not fully countered the VET losses, thus the net decline of nearly 36,000 students through 2016, but it does provide an important indicator of opportunities for further growth in this key sending region going forward.