An annual survey from the German agency association FDSV (Fachverband Deutscher Sprachreise-Veranstalter) has found that the number of Germans going abroad for language study declined slightly in 2016 with a nearly 2% decrease in bookings compared to the year before.

In a departure from previous surveys, this year’s poll focused exclusively on FDSV member-agencies, and gathered 24 responses from a membership base of 100 firms. As such, FDSV considers the results to be a meaningful reflection of overall trends in the German market, with the responding agencies directly accounting for just over a quarter of all outbound language travel. The association estimates total outbound at roughly 160,000 language students for the year.

English remains the primary area of demand for German students, and accounted for eight in ten language travel bookings (79.95%) in 2016. Spanish follows well behind at 9.86%, and then French and Italian (6.30% and 3.14% of bookings respectively). FDSV notes a modest drop in demand for English (a decline of less than 3%) and corresponding marginal growth in other leading languages-of-interest for German students.

Continuing a trend observed in earlier FDSV surveys, the German junior market remained the key segment again in 2016. Nearly six in ten outbound language students were juniors last year (58.25%). As the following table reflects, the adult segment, as a proportion of total outbound, has remained fairly stable over the past four years. 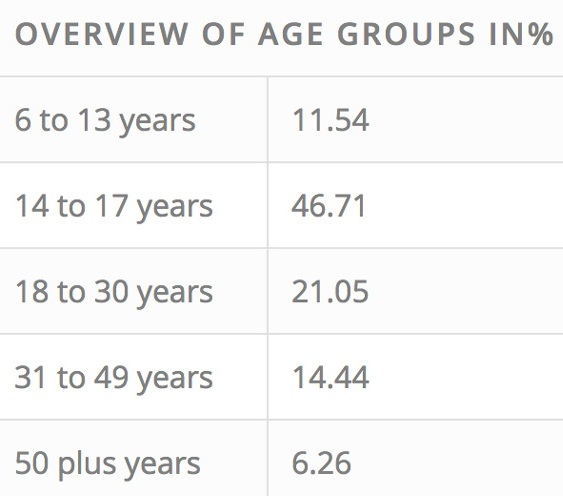 An accompanying commentary from FDSV notes that, “More than ever, good language skills are an important prerequisite for professional qualifications and career planning…Parents are increasingly investing in the education and further education of their children, and they are able to offer young people their first international experience in the form of a language course.”

Where do they go?

As the following table illustrates, the UK remains, by a considerable margin, the leading destination for German language students. Nearly half of all outbound students – and almost two-thirds of junior students – chose a British provider in 2016. 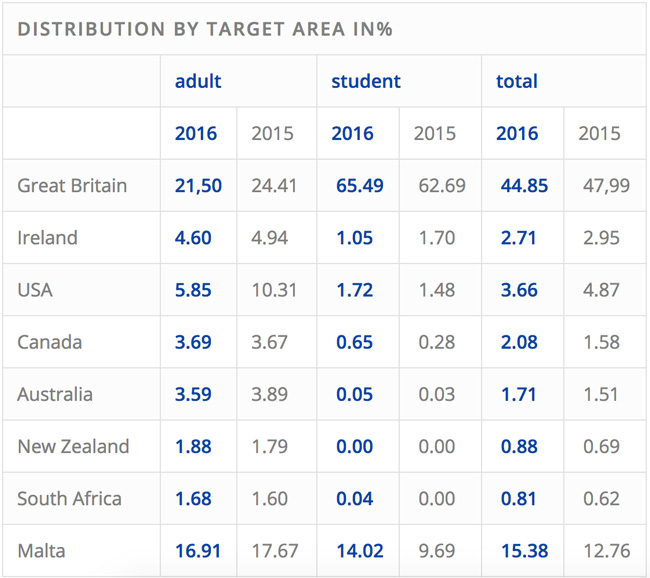 The UK lost a few points of market share in 2016 with those students largely opting for alternate destinations such as Canada, Australia, and Malta. FDSV adds, “Despite the Brexit in 2016, the UK lost only 3.14 percentage points. As no direct negative impact is immediately felt for language tourists, and the English pound is weakening compared to the euro, the attractiveness of language travel to Great Britain is again increasing. In 2016, Ireland has not experienced a booking spurt as expected. Obviously, other English-speaking destinations were more attractive and Malta, for example, recorded a one-fifth increase.”

In 2016, the average German student’s language travel trip lasted 14 days and cost €1,349 (only a 3% increase over the 2014 average without adjusting for inflation).

The 2016 results also describe a broad pattern where shorter bookings for younger students are highly concentrated within close-to-home English-speaking destinations in Europe: the UK, Ireland, and Malta. Bookings in “long haul” destinations such as Australia, Canada, and the US tend to be longer and for older students.

“Due to the tense security situation around the world, we are also expecting an increase in short-term bookings for 2017,” says FDSV. “This will surely also benefit language camp offers for pupils in Germany. These offers are not only for younger participants or for short stays a good alternative to classical language travel abroad, but also offer an interesting price / performance ratio. In addition, the safety aspect, the uncomplicated arrival and the proximity to the hometown for parents are an important selection criterion.”