Germany can see 350,000 from here. That is the number of students that the country aims to host by 2020, and the latest figures from the German Academic Exchange Service (DAAD) indicate that that target is now well within reach.

The 2017 edition of the annual Wissenschaft weltoffen report reveals that foreign enrolment in Germany reached 340,305 students in 2016. This represents an increase of nearly 6% over the year before, and marks the continuation of a long-term growth trend for Germany as a major study destination in Europe and indeed the world.

The 2017 report reinforces Germany’s position as the sixth-leading global study destination (after the US, UK, Australia, Canada, and China), and has the country continuing to close the gap with the UK as Europe’s leading destination for higher education. Where foreign enrolment in the UK has been largely flat (or grown marginally) since 2012, international student numbers in Germany increased by more than a third (roughly 36%) between 2012 and 2016. 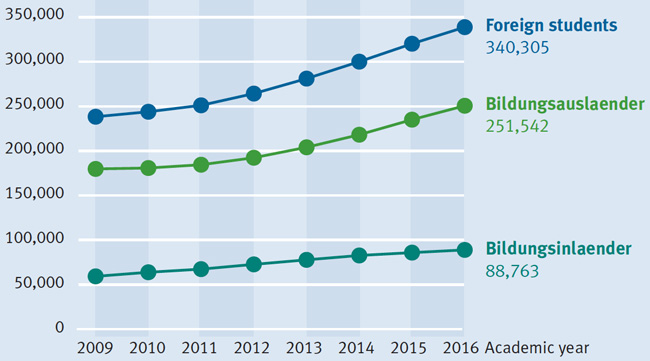 As the preceding chart reflects, Germany has had a boost in recent years from its low tuition rates, ready availability of English-taught master’s programmes, and improved post-study work rights for foreign students.

It also illustrates that DAAD tallies distinguish between two categories of students: Bildungsinländer (students of other nationalities who completed secondary school in Germany) and Bildungsausländer (those that completed their secondary studies outside Germany). The latter group accounted for nearly three of four foreign students in Germany last year, and are notable in that, in DAAD’s terms of reference, these are students that have come to Germany explicitly to pursue their higher education studies.

Also of note for 2016, Bildungsausländer students accounted for nearly all – that is, about 74% – of total enrolment growth for 2016.

As we reported last year, Germany’s international enrolment is very well diversified, and especially so relative to many other major study destinations. There have been some changes in the pecking order for the top 20 sending markets this year but nearly all – with the exception of Russia and Poland (which fell slightly in 2016) – have shown some level of growth year-over-year.

China remains the leading source of international students in Germany, accounting for nearly 13% of the total and with a nearly 7% increase last year alone. Other major gainers in 2016 included India (+16%), Italy (which replaced France as the fifth-ranked sender on the strength of a 12% increase), and the US (+10%).

Interestingly, many other top 20 senders demonstrated only marginal growth year-over-year, with about half growing 3% or less year-over-year. The overall effect, even with India’s notable growth, is that foreign enrolment in Germany remains very well distributed, particularly with respect to important sending markets in Europe and Asia. 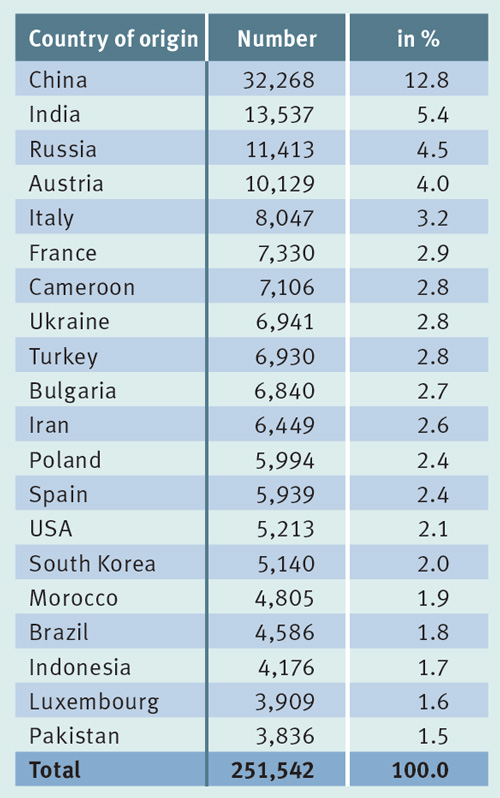 Overall, nearly half of all Bildungsausländer in Germany (45%) come from other European countries. Another 28% are from Asia, with most coming from countries ranked among the top 20 senders, including China, India, South Korea, Indonesia, and Pakistan. 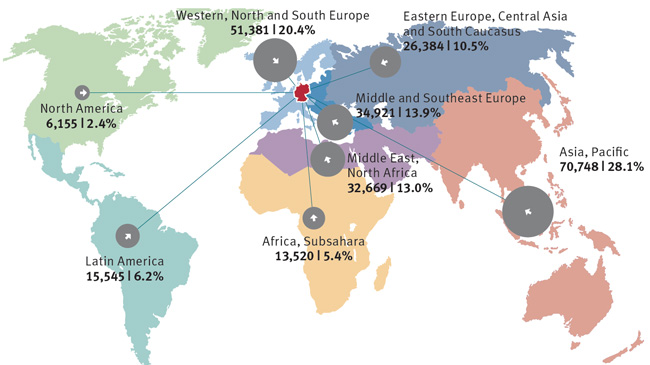 Number (and percentage of total enrolment) for Bildungsausländer in German higher education, by global region for 2016. Source: DAAD

We noted a modest shift toward post-graduate studies in Germany in 2015, and that trend continued last year as well, with slightly larger percentages of foreign students pursuing master’s and PhD programmes in 2016. Just under 36% of all international students were enrolled in undergraduate programmes last year. Another 34% were studying at the master’s level, and just over 10% were in doctoral studies.

All told, foreign students accounted for just over 12% of all higher education enrolments in Germany in 2016, against a total enrolment of 2.75 million students.

This entry was posted in Europe, Germany, Higher Education, Regions.