Three out of four Russian agents expect to refer more students abroad in 2017 than they did last year. This is one of the top-level findings of a survey of leading Russian education agents conducted by ICEF Monitor this week. It is also one of the latest indicators that the Russian market – which has been mired in a deep recession for the last two years – is now poised for recovery.

Many of the agents that responded to our survey explicitly cited the strengthening economy, and the improved performance of the Russian rouble in particular, in their forecasts for 2017. “The major factor for study abroad as well as for outbound tourism in general is currency exchange rate,” said Pass into Europe CEO Ksenia Komrakova. “It is better now than it was in 2015/16, so people are more willing to go abroad to study.”

Simply put, the Russian economy found bottom in 2016. Two years into an economic downturn that was largely precipitated by falling commodity prices – and especially oil prices – the economy slightly outperformed analyst expectations for 2016. It still shrunk during the year, but less so than most had expected. And the forecast for 2017 is for modest growth, anywhere from .8% to 1.5% of GDP depending on who you ask.

A recent update from the World Bank offers a growth projection of 1.5% for 2017 and notes, “After a prolonged recessionary period, headline economic and financial trends and indicators are now picking up. Inflation in January – October 2016 was 7.4% – less than half of the 15.9% in the same period in 2015. The banking sector has also now largely stabilised.”

As on the way down over the last two years, the path to growth this year has a lot to do with rising world oil prices, which have increased by about 20% over the last few months alone.

And as goes the world commodity index, so goes the rouble. The Russian currency has strengthened against the US dollar by about 25% over the last 12 months. A year ago, it took about 80 roubles to buy a US dollar, today it costs just under 60 roubles. This is still some distance off the pre-recession exchange levels of roughly 30-35 roubles to the dollar (as of the beginning of 2014), but nevertheless represents a dramatic improvement over the exchange rate from early 2016.

The Russian rouble-US$ exchange rate over the last 12 months, during which time the rouble has strengthened against the dollar by roughly 25%. Source: OTC Interbank

During the same period, the rouble has also strengthened about 33% against the Euro, and in the range of 20% (or better) against other major world currencies.

Not surprisingly, the Russian tourism sector was marked by two contrasting trends over the last two years: international trips plummeted (down 24% last year) even as domestic tourism enjoyed a banner period with nearly 90% growth in 2016 alone. This is a vivid illustration of how an economy responds to crashing currency values: people still travel but they do so closer to home and with their local currency.

The outlook for the year ahead, however, is again more positive as the economic recovery begins to take hold. ITB Berlin projects an overall 2% increase in Russian outbound travel for 2017. More recently, however, the Association of Tour Operators of Russia reported a 10% year-over-year increase in travel abroad by Russians during the 2016/17 holiday season.

What we might expect now is that more discretionary student travel – such as language studies or camps – will also be on the upswing in 2017. Indeed, the agents responding to our survey this week weighted English language programmes, secondary school, and university studies as the areas of greatest demand for 2017. 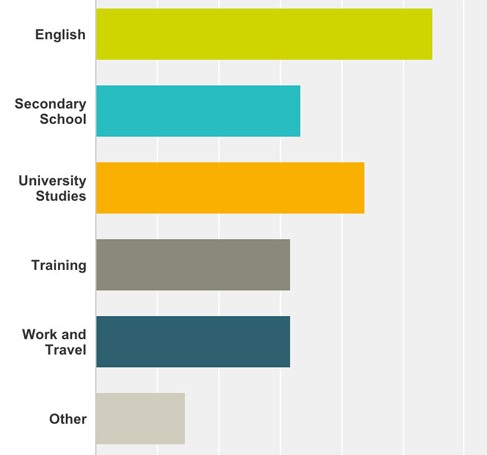 Survey respondents’ weighting of the areas of greatest demand for study abroad among Russian students for 2017. Source: ICEF Monitor

Survey respondents also noted the US, the UK, Canada, and Germany as the most attractive destinations for Russian students this year. 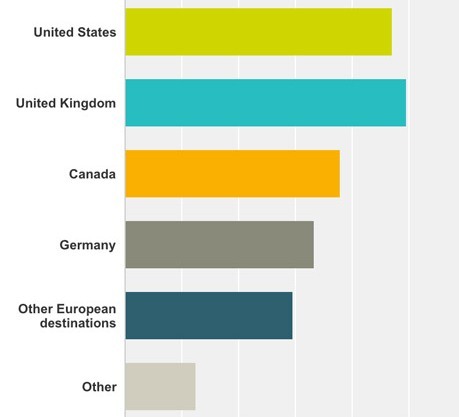 When asked what foreign educators can do this year to be successful in recruiting in Russia, responding agents offered a couple of consistent themes: be present and be responsive. These echo the similar points that we consistently see in the annual Agent Barometer survey, but it is clear as well that Russian agents want the institutions they represent to be directly engaged with marketing efforts in-country, whether that means education fairs, regional tours, staff training, or other direct support for the agent’s recruiting efforts.

“In order to be successful in recruiting in Russia, educators need to be willing to actively participate in regional marketing,” said Maksim Kostiuchenko of TravelWorks. “There are a number of regional and federal events and promotions organised, which help to educate the audience, provoke interest, increase brand awareness, and the number of students recruited. As 2016 showed, the more educator is involved and presented to the audience, the more recruited students it has.” Another respondent advocated that educators be present in any way that they can whether “participating in workshops, in roadshows, or visiting partner agencies with presentations for the staff and potential students.”

And even with an economic recovery underway, some respondents cautioned that price sensitivity is still a factor in the market. One responding agent recommended that educators “still support the Russian and CIS markets with special deals and discounts, even the situation with currency rate becomes more stable, yet the financial matter plays one of the leading roles for students and their parents when they are choosing an educational institution.”

For additional background on the Russian outbound market, please see:

This entry was posted in Agents, Europe, Most Popular, Regions, Research, Russia.