The latest data release from the Australian Department of Education and Training (DET) reveals that the country’s international education sector is tracking toward another year of strong growth for 2016.

The department reports that year-to-date October 2016, total international enrolments are up 12%, compared to the same period for 2015, and that commencements have increased by 11%.

As is always the case with DET data, there is a necessary caution here in that the statistics are tracking total course enrolments based on reporting from institutions and also from the Department of Immigration and Border Protection (DIBP). This method results in an enrolment count that is considerably higher than the actual head count or FTE enrolments for a given period.

As DET explains: “International student enrolment data generally does not represent the number of overseas students in Australia or the number of student visas issued in different countries. Instead data counts actual course enrolments. The exception is the data at the beginning of a month which represents a close approximation to the number of students enrolled on that day.” This approach gives rise to cases where students could be counted more than once if, for example, they enroll twice during the same reporting period (e.g., in an English language programme initially and then a degree programme after).

DET reports that all education sectors have seen growth through October 2016, particularly higher education institutions (+13%) and vocational programmes (+12%) – which together accounted for 70% of all international enrolment YTD October 2016.

More broadly, all sectors have seen growth from 2013 on, and total enrolment in Australia has grown by 36% YTD October 2016 compared to the same period four years earlier. 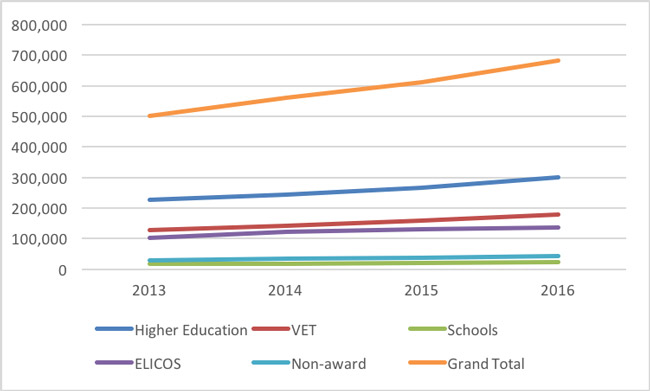 As the following chart illustrates, roughly three in four foreign students in Australia come from Asia. 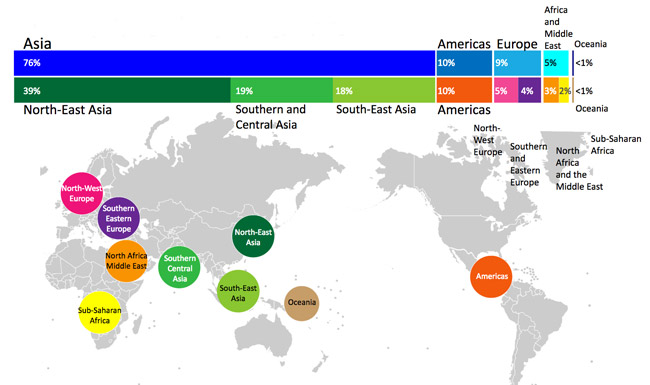 Not surprisingly, nine of Australia’s top ten sending markets are also found in Asia, Brazil being the one exception. And those top ten countries accounted for nearly seven in ten international students in Australia in 2016. 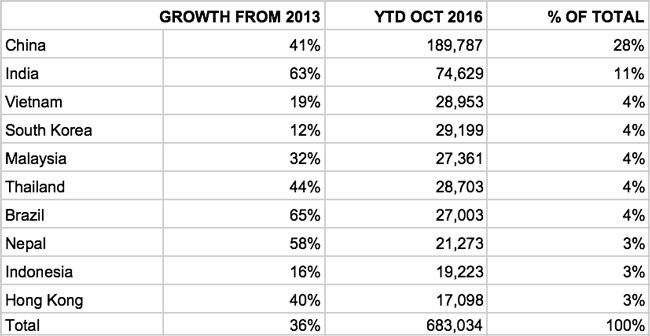 Top ten sending countries for YTD October 2016, with growth indicated for each since YTD October 2013, and percentage of total enrolment for 2016. Source: Australian Department of Education and Training

For additional background on recent developments in international education in Australia, please see: