Foreign enrolment in Russia triples over past decade

A new report from the Russian Presidential Academy of National Economy and Public Administration (RANEPA) finds that the number of foreign students enrolled in Russian universities has increased nearly three-fold over the past decade. From a base of 100,900 foreign students in 2004/05, total enrolment in Russian higher education reached 282,900 in 2014/15. This represents total growth of 180% over the ten years, and is matched by a commensurate increase in related export revenues which grew to a reported US$1.46 billion in 2015.

Year-over-year enrolment growth stands at 17.2% between 2013/14 and 2014/15 alone and RANEPA reports an average annual growth rate of roughly 9% since 2003. “The appeal of Russian education for foreigners has risen in recent years as the decrease in the value of the ruble compared with foreign currencies has made studying in Russia much more affordable,” highlights a recent news item from Russia Beyond the Headlines. “The government is trying to capitalise on this trend in several ways.”

In 2015 alone, Russia expanded its scholarship programme for foreign students and a group of 15 leading institutions established a new joint centre for international recruitment.

As the following table indicates, the biggest senders from within this group are Kazakhstan, Belarus, and Ukraine. The only non-CIS states in Russia’s top ten sending markets are China, India, and Vietnam with China – and its 20,342 students in 2015 – the largest non-CIS sender by far.

Roughly six in ten foreign students in Russia are enrolled at the undergraduate level, with the balance pursuing advanced degrees or other post-graduate qualifications. Nearly half study Engineering (20%) or Business (27%), with the Humanities (18%) and Health Sciences (12%) standing as the other major fields of study for international students.

These totals lead IIE to rank Russia as the sixth-largest study destination, after only the US, UK, China, France, and Australia. However, the IIE figures (as summarised in the table below) appear to understate the enrolments for both Canada and Germany, the 2015 totals for which we have recently reported as 353,570 and 321,569 respectively. 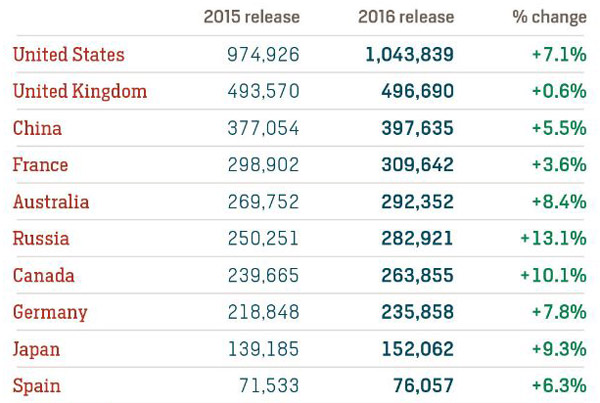 Taking those corrected figures into account, this would suggest that Russia is more correctly positioned as the eighth-leading study destination globally in terms of 2015 enrolments – but also standing on substantial growth over the past several years and poised for further gains going forward.

For additional background on Russia’s efforts to build its international enrolment, please see:

This entry was posted in Europe, Higher Education, Regions, Russia.