Comparing the costs of study for leading city destinations

In the course of examining world markets for student housing and housing investment, global real estate services firm Savills has arrived at an interesting analysis of relative cost of study for major cities around the world.

Let’s first acknowledge that comparing costs of study is always a tricky business. Currency values never stop moving around each other, “apples-to-apples” comparisons among institutions and programmes can be elusive, and some of the sharp differences in costs between major cities and smaller towns often get smoothed out into national averages.

That’s in part what makes the Savills estimates noteworthy. They are focused on larger cities, where international enrolment is often concentrated. They also look exclusively at the relative costs of purpose-built student housing (PBSH), and at the tuition costs for non-specialist STEM degree programmes (e.g., mathematics) at institutions ranked in the top tier of the QS global rankings.

Savills has rendered all of those costs in a common currency – US$ – and has arrived at a summary of average monthly costs of being an international student in 23 major world cities.

It finds that US cities are the most expensive, with total monthly costs approaching US$6,000, including tuition costs at ranked institutions in the range of US$3,000–US$4,000 per month and PBSH costs of up to US$1,600.

As the following chart reflects, the UK holds down three of the top ten most-expensive cities on the Savills table. London appears in the number five position overall but ranked as the world’s most-expensive in terms of costs of purpose-built student housing (at an average of US$1,600 per month), slightly edging out New York City and its housing average of US$1,580 per month. 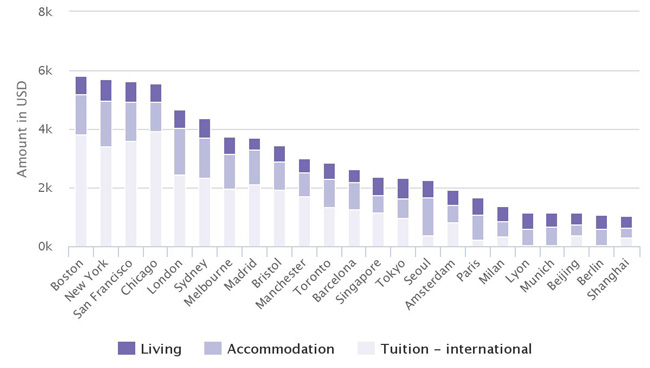 This compares to relatively affordable cities, such as Beijing, Berlin, or Shanghai where total costs of study are closer to US$1,000 per month and student housing can be had for US$300–US$600. This significant cost differential explains in part why destinations such as Germany and China have earned an increasing share of internationally mobile students in recent years.

Paul Tostevin, associate director of Savills research, agrees: “Certain cities have a clear affordability advantage, offering huge potential when it comes to attracting mobile students seeking a lower cost education. Although at the moment the majority of students are still heading to more expensive institutions we expect the trickle of students choosing value over traditional reputation to increase – particularly when so many of the universities in these cheaper cities now have the credentials to rival the old bastions of education.”

Savills points out that, along with relative cost, other factors – including institutional reputation, the appeal of the city-destination and job prospects after graduation – also play a significant role in the student’s decision-making process.

“Many students still choose to study in the US, UK and Australia despite the expense due to the fact that courses are taught in English and that these locations are home to many institutions that appear at top of the rankings tables,” adds Marcus Roberts, director of student investment and development at Savills. “The old order, however, is changing. With greater commercial focus, more courses taught in English, and alignment to the bachelor system, [newer destinations in Europe and Asia] are on the rise.”

The Savills analysis appears in the recently released Spotlight on World Student Housing 2016/17, a report that also offers considerable additional background on student housing trends and global investments in PBSH.

This entry was posted in Research.