A British Council survey of more than 1,200 young Ukrainians finds a high degree of optimism for the country’s future as well as a strong international outlook. More than four in ten respondents (41%) believe that Ukraine’s future is bright. However, a significant percentage (45%) also see emigration as a remedy for some of the country’s current economic challenges, with most of those respondents indicating a desire to leave Ukraine temporarily to pursue career opportunities not available at home.

“The young people surveyed for this report will provide the engine for Ukraine’s prosperity and stability and are the cohort from which the future influencers and leaders of Ukraine will be drawn…the ‘next generation’ is increasingly becoming the ‘now generation’,” says the British Council. The cohort in view in the survey results is made up of Ukrainians aged 16 to 35. They responded to an online survey in late-2014, which was subsequently documented in a 2015 British Council report: Hopes, Fears, and Dreams: The views of Ukraine’s next generation.

The survey report reflects some of the same points we have observed in our recent coverage of Ukraine, including the clear international orientation of young Ukrainians and the continuing strong demand for study abroad.

While the country’s higher education capacity is not in doubt – with 800+ universities, colleges, and institutes, Ukraine has a “surfeit of supply” – the quality of programmes on offer is in question. Ambitious reforms are underway, as reflected in a major reform package brought forward by the government in July 2014, and they aim to bring Ukrainian universities into alignment with the Bologna Process (that is, with common European standards for higher education) and to also better address the recognition of foreign degrees. In the meantime, the British Council observes, “Younger generations see the sector as being rife with corruption.”

Questions about education at home and the desire to pursue opportunities abroad have helped fuel a steady increase in outbound Ukrainian students over the past decade. “Ukraine’s main resource is its people,” adds the report. “It continues to have a well-educated workforce, particularly with strengths in STEM subjects. It also has considerable drive and ambition amongst its young people who are very eager to learn and to improve their education level especially in the times of the crisis.”

UNESCO estimates that just under 40,000 Ukrainians were enrolled abroad in 2013, with most, at that point, heading for Russia, Poland, and Germany. As we noted last year, however, those preferences have naturally shifted since 2014. Poland and Germany reportedly remain very attractive to Ukrainian students, but interest has grown in the Czech Republic and, among English-speaking destinations, Canada now has a greater profile as well along with the traditional favourites of the US and UK.

Nearly six in ten survey respondents (56%) said that they want to study abroad, with most indicating that their motivation was to improve their English skills and to access a higher standard of education. 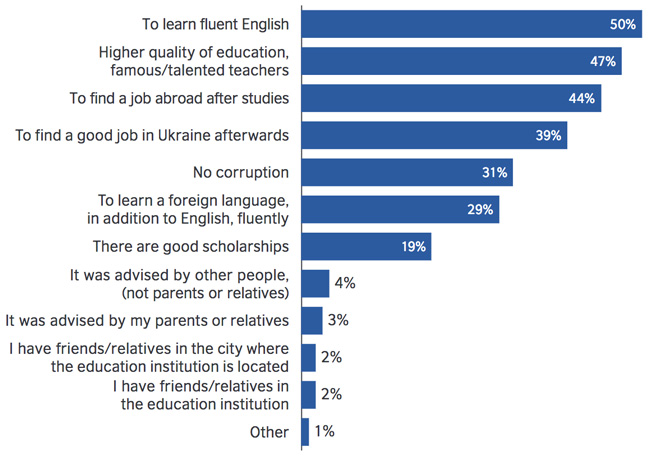 Most respondents indicated the UK, USA, Germany, Poland, and Canada as their preferred study destinations. In terms of obstacles that prevent students from pursuing this interest: “Lack of money, not surprisingly, is the main obstacle to more people seeking to study overseas. Lack of English…is also a high barrier to studying abroad.”

Just over 40% of survey respondents rated their English skills as being at the pre-intermediate or intermediate level, with only 7% considering themselves to have advanced English skills. The British Council points out that this suggests a broad need for English skills upgrading among young professionals in Ukraine, and notes as well that Ukrainians are driven both by personal as well as professional interests in learning English, “A surprisingly high number, at 70%, wanted to improve their English for personal or social reasons (reading books, watching films, communicating), almost double the number who wanted to do so for employment prospects.”

There are some other recent indications of high demand for English study among young Ukrainians. For example, one of the most widely used language learning apps in the world, Duolingo, has been especially widely adopted in Ukraine. Forbes noted recently that the number of people using Duolingo in Ukraine is roughly equivalent to the population of foreign language learners in the country’s schools and universities.

Partly on the strength of its survey findings, the British Council has recommended to both higher education institutions and language training providers that they expand their recruitment efforts in the Ukraine, and explore as well further opportunities for delivering online learning or transnational education programmes in the country.

For additional background, please see “From the field: Agent perspectives on the changing Ukrainian market” and “Ukraine: Education reforms and demand for study abroad continuing to take shape.”

This entry was posted in Europe, Regions, Ukraine.