A new report from Australia’s Department of Immigration and Border Protection (DIBF) provides some interesting insights on international student enrolment in Australia as well as the country’s student visa system.

“Student visa and temporary graduate visa programme trends: 2009-10 to 2015-16” builds on early reports of continued enrolment growth for 2016 with updated statistics through June 2016.

DIBF reports that the numbers of student visa applications for Australia have steadily increased since 2011/12. Indeed, the trend continues in 2015/16 with year-over-year growth of 7.8% in the number of student visa applications filed. The department also notes that overall approval rates remain high, at 90.5%, but as we will see below there are some important variations in approval rates by source country and education sector.

One of the more interesting top-line metrics in the report is a total count of student visa holders in Australia – interesting because it provides a snapshot of total international enrolment as of 30 June in each year.

This perspective may in fact provide a more meaningful measure of year-over-year changes in actual student numbers in Australia, and the DIBF report reflects the same steady growth in enrolment that we have observed otherwise from 2013 on. As the following chart reflects, the total number of visa holders reached 401,423 on 30 June 2016. This represents year-over-year growth of 7.17% over the same enrolment snapshot for 30 June 2015, and marks a third consecutive year of growth, building on a 11.67% increase from 2013 to 2014 and another 10.24% bump from 2014 to 2015. 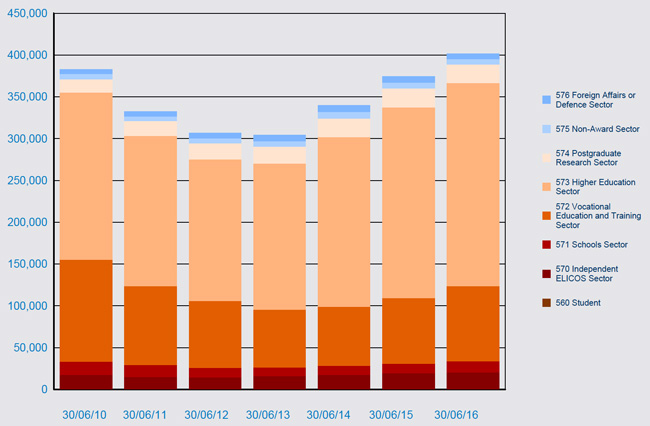 The DIBF data also provides more detail by sending market, and indicates that the top ten sending countries account for more than two-thirds of all international student visa holders in Australia. The top five source markets – China, India, Vietnam, Nepal, and South Korea – send just over half of all international students in the country, and, as the following table illustrates, China and India alone have fuelled about half of Australia’s overall enrolment growth since 2013. 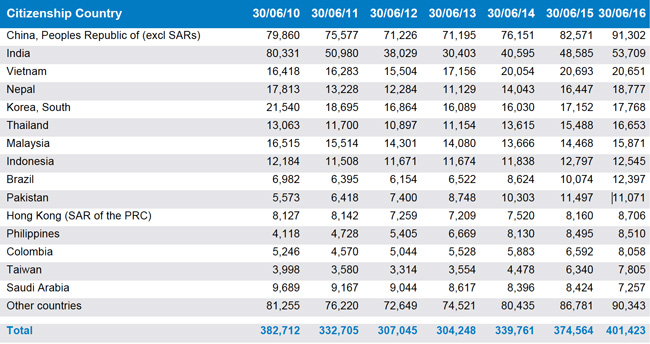 Number of student visa holders in Australia by citizenship country as at 30 June, 2010–2016. Source: DIBF

As the overall 90.5% approval rate we noted earlier would suggest, approvals by visa subclass (that is, by education sector) are generally high. Even so, that approval rate for 2015/16 represents a slight decrease over the 92% approval for applicants in the previous year.

DIBF reports as well that all sectors have had approval rates of 90% or better over the past three years, with the exception of applications for Vocational Education and Training (VET) study which have ranged between 84% and 89% since 2013.

We see more variability, however, by sending market as reflected in the following table for Australia’s top ten sending markets. Within that group of leading source countries, we see a high of 97.2% approvals for Malaysian applicants or 96.5% for those from China, which contrasts with much lower approval rates for students from India and Pakistan.

On the question of processing times, the department offers the following guidance as to current service standards: “The department gives priority to applications outside Australia to ensure that prospective students receive their visas in time to travel to Australia to commence their courses. Students in Australia are granted bridging visas pending finalisation of their new student visa applications and can still commence their courses.”

This entry was posted in Australia, Australia/Oceania, Immigration, Regions, Research.