The Australian government has delayed implementation of a controversial tax for working holiday makers that was due to come into effect on 1 July. First announced in Australia’s 2015 budget and then confirmed with the current year’s budget on 3 May, the proposal had been widely criticised by farmers and regional tourism operators, both of which rely on working holiday visitors for seasonal labour requirements. The proposed tax had also come under fire from the tourism industry, and particularly from travel agencies offering work and travel placements.

The new tax would have removed a tax-free threshold of AUS$18,200 for working holiday makers, and, at the same time, established a marginal tax rate of 32.5% for all income earned in Australia. It was projected to generate an additional AUS$540 million in tax revenue over the next three years.

To say the least, this is a sharp departure from the current tax policy for working holiday makers, and, as the following table illustrates, one that would place Australia at a distinct disadvantage relative to competing destinations such as New Zealand and Canada.

The new tax has made headlines in some of Australia’s most important sending markets, and the commentary from students in those news stories has been consistent: if the new tax comes into force, they are leaving Australia. “If such a heavy tax is slapped on, I can’t live here any longer,” a Japanese working holiday visitor said to The Japan Times. American backpacker Dave Anderson told the Australian Financial Review that he is on his way out of the country as well. “There’s no way I would be able to survive in [an] expensive city like Sydney, being taxed at the new rate,” he said. “I’m ready to leave Australia because I’ve been fed up with the flip flopping the government’s done.”

In face of such strong pushback from working holiday makers, and also from local industry, Assistant Treasurer Kelly O’Dwyer announced on 17 May that the government would conduct a review of working holiday visa policy and postpone any changes to the current system, including the implementation of the new tax, until 1 January 2017.

Many observers, including some Members of Parliament, believe that the tax proposal is as good as dead, and that the forthcoming review will see to that. Others argue that some level of tax for working holiday makers is appropriate, just perhaps not as high as in the current proposal. Whatever revised plans are in the works, they will become more clear in October when the review report is filed with a view to implementing its recommendations for January 2017.

For now, others point out that the proposed tax, even though now postponed, will still likely have an impact on working holiday numbers for this year. “Working holiday makers plan their trips well in advance and damage has been done,” said Julian Ledger, chief executive of the travel operator YHA. Mr Ledger also echoes the point of many others in the tourism industry when he says that simply postponing a bad tax is not the answer. He argues instead for a 15% flat tax rate for working holiday makers, a rate that is in line with tax rates for other types of seasonal workers in Australia.

A large sector, but shrinking

Working holiday travel is a substantial sector in Australia and is currently valued at just over AUS$3.5 billion. Nearly 227,000 foreign visitors entered Australia on a working holiday visa in 2015.

However, a new report by industry consultant, and former general manager of the Australian Federation of Travel Agents, Gary O’Riordan, points out the sector is already under pressure and that visitor numbers have declined over the last two years. Recommendations to grow the Australian Working Holiday Maker scheme highlights a more-than-12% drop in working holiday visas between 2013 and 2015. 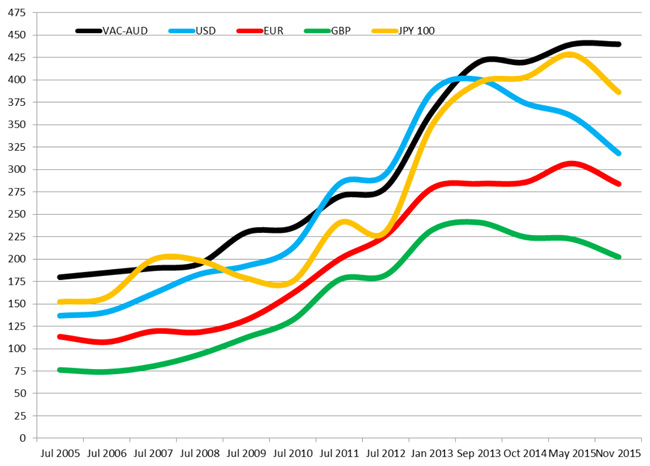 The O’Riordan report is unequivocal in connecting the rising cost of working holiday visas in Australia to declining visitor numbers. “There is continuous feedback from in market regarding what is perceived to be the inflated price of the Australian working holiday visa. The visa fee increased twice in 2013 and at a time when the Australian dollar was trading high making Australia less attractive to potential [working holiday makers, or WHMs]. The visa fee being an up-front levy and an additional hurdle increases the cost of coming to Australia as a WHM on top of the fact that we are a long-haul destination for many potential travellers in key markets which makes Australia an expensive destination…There is no other explanation for the steady decline in visas issued since 2013 other than the increasingly high visa fee.”

On the question of the proposed tax for working holiday makers, the report adds, “This situation will dramatically worsen should the proposed tax arrangements be implemented particularly at the higher marginal tax rate.”

The report offers instead a range of recommendations for boosting working holiday numbers in Australia, including the following:

O’Riordan is equally clear as to the economic impact of further declines in working holiday numbers in Australia. His report projects that a further 5% decline in working holiday visas will result in a AUS$5.6 million loss in government revenues and an overall economic loss (factoring in direct spending by working holiday makers) of more than AUS$170 million. A further 10% reduction, he estimates, will cost the Australian economy roughly AUS$340 million.

As this analysis suggests once again, the wheels of government policy have a direct impact on the competitiveness of destinations. In particular, the declining numbers of working holiday visas over the last two years are likely to cast a long shadow over the government’s upcoming review and its subsequent policy directions for January 2017.

This entry was posted in Australia, Australia/Oceania, Regions, Work Abroad.