Myanmar opening up to foreign investment and international education

Myanmar held its first free nationwide election in 25 years earlier this month, and the 8 November vote saw opposition leader Aung San Suu Kyi’s National League for Democracy (NLD) win a clear majority in parliament. Under the provisions of a constitution drafted by the former military regime, Ms Suu Kyi, as the widow of a foreigner, cannot become president herself. However, “The Lady,” as she is still widely called, has let it be known that she will rule the country anyway through a proxy president chosen by her party.

As this constitutional jujitsu suggests, Myanmar will now undergo a long and somewhat uncertain transition of power. The previous parliament continues to sit this month and the NLD will not select its president and form a government until early 2016. The military, meanwhile, will continue to hold considerable power within the country. Again by constitutional decree, 25% of the country’s parliamentary seats are reserved for military members (and therefore not contested in elections) and the military has considerable influence in a number of key government ministries.

In this file photo from November 2010, Aung San Suu Kyi arrives at her National League for Democracy headquarters in Yangon, Myanmar

Even so, the electoral returns this month mark an important and dramatic further step in the opening up of a country that has stagnated for decades under authoritarian rule. Taking a broader view, the NLD’s election win has the country poised to accelerate a process of democratisation, international engagement, and reform that has gathered considerable momentum over the past four years.

Many observers see this as a pivotal moment in Myanmar’s history. The country has badly lagged global and regional growth norms for decades, and the education system is in terrible shape, as are other key social services. “Exceedingly poor, Myanmar needs everything,” says a recent item from Canada’s Globe & Mail. “50 years of terrible, often brutal, government has left the country without a decent education system, health care, infrastructure, employment opportunities or a functioning legal system.”

If the challenge is great, however, the scale of opportunity for Myanmar is equally compelling.

A 2013 report from McKinsey Consulting projects – if the country can successfully invest for the future and transform its economy – that GDP could quadruple to reach US$200 billion by 2030. Also by that time, McKinsey estimates that Myanmar’s consumer class (that is, those with sufficient income for discretionary spending) could rise from about 2.5 million today to 19 million by 2030, triggering a tripling of consumer spending from US$35 billion to US$100 billion.

McKinsey sees the opening up of the country – easing of restrictions on foreign companies and institutions and an influx of foreign capital – as a key factor in this transformation. However, the country has considerable resources at its disposal as well, including a large working-age population and extensive natural resources.

It also has the advantage of being located smack in the middle of some of the world’s fastest-growing economies. As the McKinsey report puts it, “Myanmar is also fortunate in its location at the crossroads between Bangladesh, China, India, Laos, and Thailand, countries that are home to more than 40% of the world’s population and are huge potential markets. Overall, Myanmar is close to a market of more than half a billion people. And by 2025 over half of the world’s consuming class, that is, those with income of more than US$10 a day, will live within a five-hour flight.” 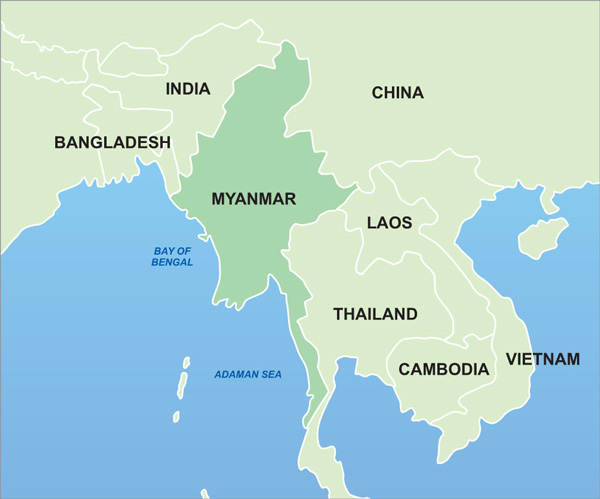 The outlook for education

It has been only too clear that Myanmar cannot achieve its potential without improving the education available to its people, and the government has made reform of the entire education system a national priority in recent years.

Primary school enrolment is high but participation rates drop off sharply in secondary school. The country’s universities, many of which were closed for extended periods under the military junta, need development and upgrading in almost every respect.

Reforms have been enacted for primary and secondary education in recent years but the progress in higher education has been more halting, in part because advanced education remains something of a political football in Myanmar.

The NLD’s recent electoral victory may help bring some clarity to the situation, but much remains to be done in terms of university governance and raising the standard of education. Today, the country’s 169 universities are administered by 13 different ministries, including the Ministry of Education, and national reforms are further hindered by the absence of any overarching national legislation for higher education.

The opportunity in international education, therefore, is two-fold: foreign providers can enter the market and operate directly within Myanmar, whether by opening schools or by establishing links with domestic institutions or partners. And of course foreign institutions or schools may also recruit students from Myanmar to study abroad.

The number of outbound higher education students has been modest in recent years, but the indications of rising demand are there.

UNESCO estimates that somewhere between 6,000 and 7,000 go abroad each year. Many are enrolled within the region, notably in Thailand, Japan, Malaysia, and Singapore. Anecdotal reports suggest as well that major study destinations further afield, the US and Australia in particular, have grown in popularity as well.

Reports also indicate that the number of international schools operating in Yangon, the country’s commercial centre, has increased sharply over the last few years. A June 2015 report from Myanmar Insider highlights the growing demand for quality education (both within the country and via study abroad) and the determination of parents to invest in their children’s education.

The report points again to the increasing presence of international schools in Yangon but also to a growing infrastructure and marketing effort for study abroad. “Now, some educational organisations are emerging that provide preparatory educational services to the students who want to study abroad…Educational seminars given by universities from different countries offering scholarships are becoming a common thing in Yangon. While attracting students from Myanmar, foreign universities are also exploring new partnerships to invest in Myanmar education sector.”

Indeed, along with a ballooning of foreign investment in Myanmar since 2011 there have been some high-profile efforts in international education as well. The US-based Institute of International Education (IIE), for example, has led high-level delegations to Myanmar over the last two years and recently announced the expansion of the Myanmar Higher Education Initiative, a programme that provides international education training and support for government and university officials. These efforts have also led to other bilateral and consortia partnerships between institutions in the US and Myanmar.

Recent reports from the IIE, however, highlight the continuing challenge of skilled labour shortages in the country and the “huge need for human resources.” Myanmar’s productivity has badly lagged that of its regional neighbours for decades now and the country’s investment (and performance) in its education system is a big part of that story.

“A poorly educated population is a bottleneck in reforming the economy,” adds The Globe & Mail. That clear acknowledgement, the ambitious agenda of the incoming government, the strong support of the international community, and burgeoning foreign investment, are now poised to produce some genuine progress in education in Myanmar. The challenge is great but the country’s potential is undeniable as well.