(Editor’s note: CBIE advises that CIC changed its reporting methodology in 2014 so that temporary residents holding both study permits and work permits were included in the enrolment counts for this year’s report. In previous years, temporary residents holding both types of permits may not have been included in student counts if they spent the bulk of their time in Canada engaged in work. This change results in an increase in enrolment counts reported for 2008–2013 over those given in earlier editions of A World of Learning.)

With that clarification in mind, the following chart maps enrolment growth from 2008. Please note that in a Canadian context “study permit” is the term used to refer to study visas, and that permits are required only for students who study at any level for six months or more. The following student counts, therefore, do not reflect enrolment for language studies or any other programmes of less than six months.

International students in Canada by year, all levels of study, 2008-2014. Source: CBIE

According to the Institute of International Education’s (IIE) Project Atlas report, Canada’s share of the global population of internationally mobile students has nudged up slightly this year to reach 6% (as compared to 5% last year). Canada retains its position as well this year as the seventh-largest international study destination, after the US, the UK, China, Germany, France, and Australia. 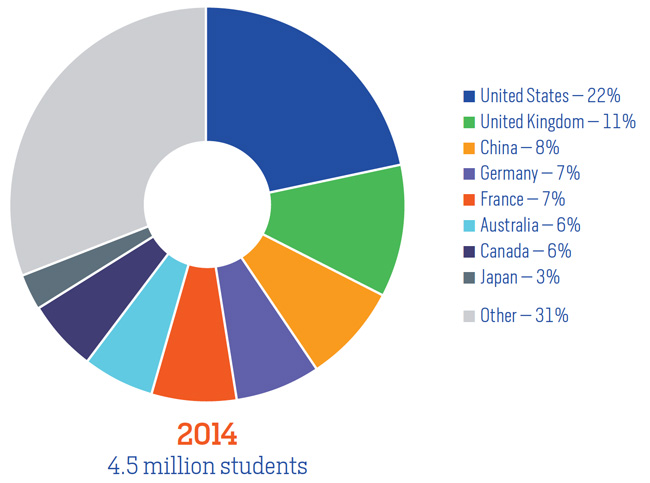 As in previous years, the CBIE report provides important insights on students’ intentions following their current programme of study. Of particular note this year:

Six in ten international students in Canada are from Asia (46% East Asia; 14% South Asia). Europe and the MENA region (Middle East and North Africa) account for another 10% each, and Africa a further 7%. Markets in Latin America and the Caribbean also account for roughly 7% of foreign enrolment in Canada, while the most proximate sending market, the US, comes in at 4% for 2014.

The top ten countries – add the US, Brazil, Nigeria, Japan, and Mexico at this point – sent 72% of Canada’s foreign students in 2014. “This proportion remains relatively unchanged from the 2012 figure of 70%,” notes CBIE, “indicating that in recent years there has been little change in the representational diversity of international students in Canada.”

The following table provides a breakdown for Canada’s top ten sending markets. We should note as well that just outside of the top ten are Vietnam, Iran, Pakistan, the UK, and Russia, each of which accounted for between .99% and 1.44% of Canada’s foreign students in 2014. 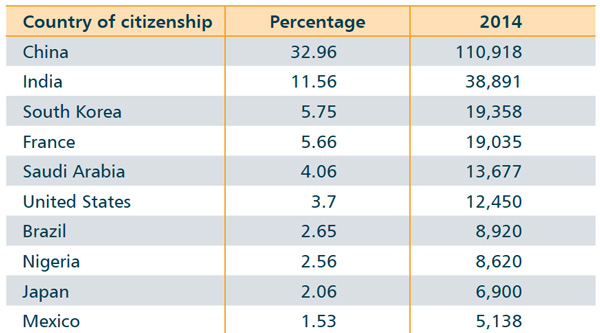 Also of note, the fastest-growing sending markets for Canada in 2014 were:

The majority of Canada’s international students (79.8% or 268,659 students) were enrolled in post-secondary studies in 2014. Just over 52,000 (15.4%) were pursuing secondary studies, with the balance – a little less than 5% of total enrolment – in other fields of study, whether language programmes or otherwise.

As noted above, these figures will naturally understate enrolment in shorter-term language programmes as those students will not have studied in Canada with a study permit for programmes of less than six months. A separate survey from Languages Canada indicates that Canada welcomed 137,416 language students in 2014. Just over a third of those (34%) held study permits, suggesting that the incremental number of language students – that is, over and above the enrolment reported by CBIE and CIC for 2014 – stands at about 90,700 for the year.

Therefore, combining the Languages Canada and CIC statistics places the total head count for international students in Canada at something closer to 427,000 for 2014.

A World of Learning 2015 closes by highlighting important trends in internationalisation worldwide. In terms of student mobility, two of the key trends addressed in the report are the growth of intra-regional mobility and emerging global education hubs.

CBIE points back to OECD data indicating a growth trend in mobility between countries that are close to each other, and that 21% of all mobile students in 2012 were from countries that shared borders with the destination country.

This pattern is playing out worldwide, and is particularly notable in Europe, where major mobility programmes play an important role, Africa, and in Southeast Asia where a Common Space of Higher Education has been established to encourage mobility among ASEAN states.

One implication of this global trend for Canada, argues CBIE, is that “Canada can leverage intra-regional mobility by enhancing its efforts to strengthen education ties with the US, Mexico, Latin America and the Caribbean.”

The emergence of important education hubs around the world, notably in Asia and the Middle East, is another important trend flagged by CBIE. While traditional destination countries still attract the lion’s share of internationally mobile students, regional hubs are indeed drawing greater numbers and – given their success at drawing students from neighbouring countries – are something of an accelerator for the growth of intra-regional mobility as well.

As for Canada, CBIE CEO Karen McBride says, “Internationalisation is no longer a peripheral activity, but a core strategy of many institutions and schools.” Indeed it is and the trends we have considered here, along with the many others that shape and shift international education markets, will no doubt continue to challenge and engage international educators in Canada and around the world.