The Council of Graduate Schools (CGS) reported earlier this month that first-time graduate enrolment in the US grew 3.5% between fall 2013 and fall 2014. This represents the largest, single-year increase since 2009 and certainly bodes well for future enrolment trends. However, total graduate enrolment in America remains below the recent-year peak of 2009 and grew by only 0.4% overall between 2013 and 2014.

Further, first-time international student numbers grew by 11.2% between 2013 and 2014 alone, and foreign students accounted for 21.6% (102,775) of all new graduate students in the US last year. First-time enrolments by US students, meanwhile, grew by only 1.3% for fall 2014 (nevertheless also representing the largest year-over-year growth in domestic enrolment since 2009).

The tally of total graduate enrolment in the US – both first-time and continuing students, that is – shows a similar contrast between foreign and domestic growth. Total foreign enrolment grew by 9.4% between fall 2013 and fall 2014, effectively offsetting a decline in total domestic student numbers of 2.4%. As a CGS statement puts it, “The contributions of international graduate students are becoming increasingly important to the US graduate education enterprise.”

“The increase in overall enrolments is good news,” added CGS President Suzanne Ortega. “But the disparity between US and international growth is a cause for concern.”

The findings are based on a unique annual survey of US graduate schools and published in a new report from CGS: Graduate Enrollment and Degrees: 2004 to 2014. The latest survey gathers responses from 636 US graduate institutions which together received more than two million applications, extended over 850,000 offers of admission, and enrolled 479,642 first-time graduate students in fall 2014.

“The [latest CGS enrolment figures] are striking because there is often an inverse relationship between the economy and graduate school enrolment,” says The Washington Post. “People pursued advanced degrees in high numbers at the outset of the financial crisis but pulled back amid a protracted recession and the rising cost of attendance.

While job prospects have improved, the cost of graduate school continues to climb, along with student debt. The jump in enrolment from 2013 to 2014 shows that students are willing to make the gamble.” 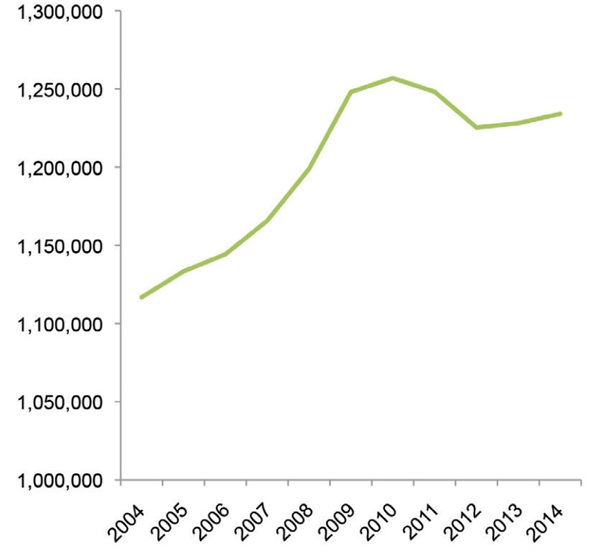 Studies show that those with advanced degrees achieve higher lifetime earnings than those with bachelor degrees or high school credentials, and this expectation no doubt plays a part in the recent strengthening in US graduate enrolment.

CGS points as well to US Bureau of Labor Statistics projections indicating that employers will add nearly 2.4 million jobs requiring a graduate or professional degree between 2012 and 2022. “Greater investments in graduate education and research – supporting both domestic and international students – will be required to keep up with the demand for graduate level talent in the future,” said Ms Ortega.

All eyes on STEM

The growing profile of international students is also helping to shape broader enrolment trends in US graduate studies.

For one, international enrolment is heavily concentrated in STEM fields (science, technology, engineering, and math). Nearly six in ten (57%) foreign graduate students in the US were enrolled in STEM subjects last year. In comparison, only 16% of US students were studying in those same fields. 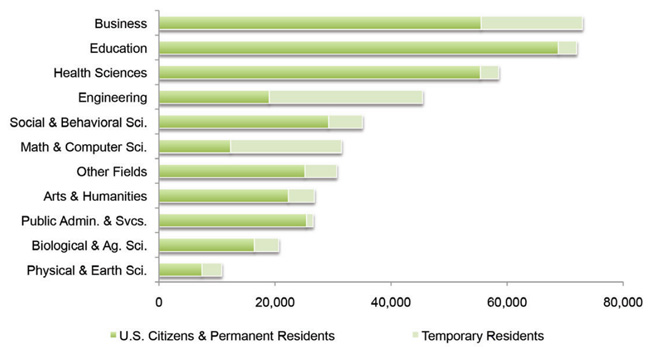 Given the percentage of enrolment growth accounted for by international students, it is not surprising that STEM subjects also reported the greatest year-over-year growth in 2014. Reflecting the consistent pattern since 2004, first-time enrolment in mathematics and computer sciences programmes grew the most (21.3%) between fall 2013 and fall 2014. This was followed by engineering (10.7%), and health sciences (6.1%).

Conversely, arts and humanities registered the biggest enrolment decline last year (-4.0%), followed by “other” fields (-3.5%), and then social and behavioural sciences (-3.1%).

While women continue to enrol in graduate programmes in greater numbers than men (accounting for 57.9% of all first-time master’s students and 51% of doctoral students), the same is not true in STEM subjects. Just 25% of fall 2014’s graduate engineering students were women, for example, and just under a third of mathematics and computer science students were female. “But women may be catching up,” adds Inside Higher Ed. “The council notes that growth in first-time STEM enrolments by women was generally equivalent to that of men in many fields.”