How do students benefit from MOOCs?

Most students don’t finish a MOOC, a Massive Open Online Course, and the statistics are consistent on this point across platforms. There are lots of different ideas about what MOOCs are and how they might be used in the future. But the notion that they might further accelerate access to higher education on a truly mass scale has lost some currency since the initial heady days of the first major MOOC rollouts starting around 2012.

But what about students who do complete a course? What do they get from their MOOC studies? A new study recently took up the question and its findings were published earlier this week in the Harvard Business Review. In “Who’s Benefiting from MOOCs, and Why,” a team of academics – each of which is either employed with the MOOC provider Coursera or with a Coursera-affiliated university – took a closer look at the estimated population of 25 million people who have enrolled in MOOCs to date.

In December 2014, the team fielded a survey targeted to 780,000 students in 212 countries who had completed a Coursera course as of September of that year.

When you think about it, these are two interesting statistics in themselves. While it’s true that only about 4% of enrolled students go on to complete a course with a provider such as Coursera, the reach of major MOOC platforms is still very impressive.

For example, more than a million students have completed 2.1 million courses from Coursera’s 2012 launch through April 2015.

Getting back to the immediate study at hand, the survey team gathered 51,954 responses from course-competing students. Nearly six in ten (58%) were employed and almost another quarter (22%) were already enrolled (whether full-time or part-time) in “a traditional academic setting.” Just over a third (34%) were from the US, another 39% were from other OECD countries, and 26% were from non-OECD countries.

The survey explored the ways in which students benefited from completing a MOOC, and it found evidence of real impacts in two key areas:

Indeed, career benefits are the (slightly) more common motivation for taking a MOOC. Just over half (52%) of the survey respondents cited improving their current job or finding a new job as the primary goal of their MOOC studies. In contrast, only 28% note an explicit educational goal – completing perquisite studies, for example – as their reason for completing a MOOC. 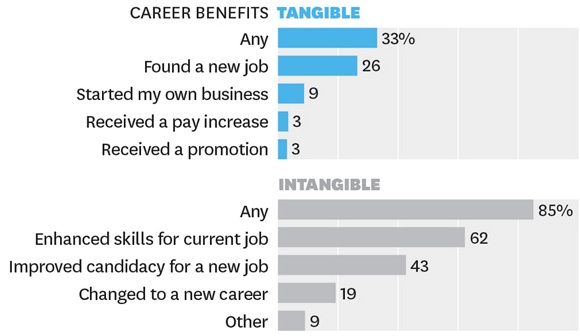 Career benefits of MOOCs as given by respondents who indicated career goals as their primary motivation for completing a course. Source: Coursera survey data

It is easy to get sidetracked here with comparisons of concrete to less-tangible benefits, but the education technologist George Siemens made the relationship between the two plain in a recent comment to The Chronicle of Higher Education. “One of the realities is that any kind of skill development doesn’t have an immediate impact,” he said. “So the day that you learn a skill doesn’t mean that you immediately receive a 30% bump in your salary.”

Interestingly, the survey also correlates responses to socioeconomic status and educational attainment. This led the research team to a notable finding as to the apparent role of MOOCs in supporting career advancement for students of more limited means and with lower levels of education. “Among all career builders, we find that general career benefits (both tangible and intangible) are more likely to be reported by people with higher socioeconomic status and higher levels of education,” say the authors.

Of the 28% of course-completers who enrol primarily with an education goal in mind – the “education seekers” – 88% report an education benefit. As with career benefits, the survey sought to measure both tangible and intangible educational outcomes for students, where more concrete results included earning academic credit or completing prerequisite studies.

Educational benefits of MOOCs as given by respondents who indicated academic goals as their primary motivation for completing a course. Source: Coursera survey data

All in all, 87% of “education seekers” reported an intangible educational benefit of some kind, and 18% a tangible benefit. This numbers tracked further upward for the nearly half (47%) of them already enrolled in a traditional academic setting. 94% of such students reported an educational benefit, including 24% that indicated a tangible benefit of some kind arising from their MOOC studies.

“These findings support some of the early hopes that MOOCs would provide a life-changing opportunity for those who are less advantaged and have limited access to education,” conclude the authors. “The courses are reaching large numbers of people, and disadvantaged learners are more likely to report tangible benefits. Of course they aren’t a cure-all for the myriad problems of global education. But they’re a step in the right direction, providing open access to a learning experience that many find beneficial for furthering their education and careers.”

For a further summary of findings, please see a slide deck of findings from the research team below.