A planned expansion of the landmark Brazilian student mobility programme Science Without Borders (Ciência sem Fronteiras, or CsF) has been cast into doubt with media reports this month of a substantial budget cut for 2016.

CsF has emerged in recent years as one of the most significant government-funded mobility initiatives in the world. The programme has led to dramatic growth in Brazilian enrolment in a number of destination countries, notably the US, Canada, the UK, France, and Germany.

The news of cuts for next year comes amid signs of growing economic trouble for the country. The Brazilian currency, the real, reached a 12-year low at the start of September on projections that the economy will shrink by more than 2% this year. A planned national budget surplus for 2015 has gone by the board as well, and the public finances are expected to slip into a deficit by as much as R30.5 billion (US$8 billion) in 2016.

With pressure on the public purse mounting, the government has opted to make some substantial cuts in planned spending, and education has been reportedly one of the hardest-hit areas. Hoje em Dia reports cuts of 19% in educational spending for 2015, or a reduction of R9.4 billion from a planned budget of R48.8 billion for the year.

“Next year, unfortunately, we are told that there will be a bigger cut,” said Education Minister Renato Janine Ribeiro at a recent public event.

A number of Brazilian media outlets, including Folha de São Paulo, are reporting that the budget for Science Without Borders (CsF) will be cut from R3.5 billion (US$918 million) this year to R2.1 billion (US$551 million) in 2016.

This amounts to a year-over-year funding reduction of 40.3%, and – observers believe – effectively reduces the programme budget to a level where it can only sustain the studies of scholarship students already abroad as opposed to funding new scholarships for 2016 and beyond.

First launched in 2011, CsF is on track to provide a planned 101,000 scholarships for undergraduate and graduate students by the end of this year. Brazilian President Dilma Rousseff announced an expansion of the programme in mid-2014, scheduled to begin with an application round for new scholarships in 2015, with a target of supporting a further 100,000 study abroad scholarships through 2018.

It now appears that, at the least, the application round for 2016 will not proceed and that granting of new scholarships will be suspended. While those currently approved for scholarships will continue their studies as planned, including a reported 14,050 further CsF recipients that will begin their studies over the second half of 2015, it is anything but clear how the programme will proceed after 2016.

CsF is extremely popular in Brazil, so much so that government officials, who at one point considered even deeper cuts for next year, opted to maintain the 2016 budget at a level that could continue to support ongoing students.

Needless to say, however, those hoping to join the programme next year are now left on the outside looking in. Ana Carla Alcântara is one such student. Twenty-three-years old, and already a university graduate, she had hoped to pursue post-graduate studies in the US through CsF next year.

“When I heard the news I was very upset,” Ms Alcântara said to the Brazilian news site Blasting News. “I am investing in the English course since I graduated and preparing very hard for this experience of living and studying in the United States…But unfortunately, it seems that [CsF] will not give more [scholarships]. It’s a shame. I can only continue getting ready to jump at the chance when it comes.”

CsF is jointly administered by the Coordination for the Improvement of Higher Education Personnel (CAPES) and the Brazilian National Council for Scientific and Technological Development (CNPq). Both funding agencies have indicated that the reduced funds now allocated for 2016 will be used to support the undergraduate and graduate students already under their supervision.

Adi Balbinot Junior, the general coordinator of CAPES, said in a recent public appearance that, “The funds for [students departing in 2015] and for those who are abroad are guaranteed.”

Minister Ribeiro has asserted as well that CsF funding is confirmed for this year, and has indicated only that “the budget is not yet defined” for 2016 and will be determined through upcoming budget debates in the National Congress.

Part of the challenge for budget planners and programme administrators is that, while tuitions for CsF recipients are paid in foreign currency, the Brazilian real has dropped off sharply against the US dollar since the scholarship programme was first established in 2011.

In July 2011, a US dollar cost R1.55. As the following chart reflects, however, the real has weakened in the years since and a single US dollar now costs roughly R3.70 following a more significant decline over 2014 and 2015. 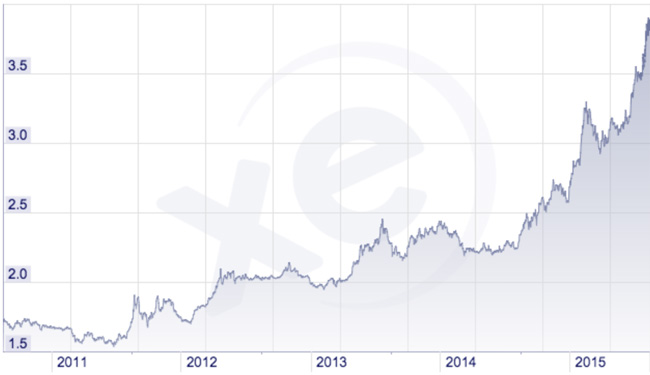 This dramatic combination of a stumbling economy at home and programme expenses that must be paid in foreign currency leaves Brazilian funding agencies with limited negotiating room going forward.

It is possible that CsF may re-open applications for new scholarships to begin after 2016, perhaps with a more limited focus on graduate studies as some have suggested. Much will depend on the coming budget discussions within the Brazilian government, and, in the longer-term, on the underlying health of Brazil’s economy.