At a July ceremony at San Ildefonso College in Mexico City, three educational institutions – the Cervantes Institute, the National Autonomous University of Mexico, and Spain’s University of Salamanca – announced the launch of a new Spanish proficiency exam that they envision as the global standard for testing in the language.

King Felipe VI of Spain, who was in Mexico presiding over the unveiling of the test along with his wife Queen Letizia, said, “We were missing a flexible, highly respected certificate of proficiency in Spanish as a foreign language along the lines of those offered for the English language.”

Called the Servicio Internacional de Evaluación de la Lengua Española, or SIELE, the test is modeled on English exams such as the TOEFL and IELTS, and debuts in 2016. According to an estimate provided by officials at the Cervantes Institute, 300,000 people will take the test in its first year, with that number rising to 750,000 by 2021.

The SIELE differs from the well-established Diplomas de Español como Lengua Extranjera (DELE) exam in a couple of important ways. A DELE certificate does not expire, for example, whereas the SIELE is valid for two years, and the DELE has more levels than the SIELE. However, the two exams are not meant to be competitive, but rather complementary, and the DELE will continue to be offered alongside the new test.

The SIELE examination will cover the four core communication skills: speaking, listening, reading, and writing. The reading and listening sections will be scored immediately, with the others assessed by accredited examiners within a target three-week turnaround for results. The test will be computer based, and administered year-round at a network of global test centres.

As opposed to the English exams it is patterned after, the SIELE will take into account different linguistic varieties of Spanish. For example, where the TOEFL tests only in American English, and Cambridge Exams test in British English, the SIELE will incorporate within a single exam the many different geographical variations of Spanish, a language that differs greatly from nation to nation.

King Felipe described the test as “pan-hispanic” in character. He added the new certificate would extend the global reach of Spanish, which he described to the audience as a heritage that “we must all look after, disseminate, and promote.”

Victor Garcia de la Concha, Director of the Cervantes Institute, voiced similar sentiments, saying SIELE was not merely a screening test, but also a means of promoting all forms of Spanish.

Spanish on the global scene

The stature of the three partners-in-development for the exam gives an indication of the expectations for its success. The National Autonomous University of Mexico and the 13th century-established University of Salamanca are respectively the largest and oldest universities in the Spanish-speaking world, while the Cervantes Institute operates in 44 countries. With these institutions reaching out to the 550 million Spanish speakers around the world, the impact of the SIELE should be profound.

The initial test centres will be opened in three nations:

Moving forward, demand for the SIELE should be high in other countries with large numbers of Spanish learners such as France, Italy, Germany, and the West African nations.

In 2015, an estimated 21 million people are studying Spanish as a foreign language at all levels of education – an increase of 1.5 million from 2014, according to figures provided by the Spanish Federation of Associations of Schools of Spanish as a Foreign Language (FEDELE). However, the Cervantes Institute notes that because of incomplete data, the actual amount could be 25% higher. The Cervantes Institute indicates that the top countries for the study of Spanish include:

By the year 2030, Spanish speakers are projected to constitute 7.5% of the global population, and that percentage will increase to 10% within a maximum of four generations. In the United States, where there are already more than 50 million Spanish speakers, the usage of the language is expected to increase by 2050 to a level that will make America the top Spanish-speaking country in the world, surpassing even Mexico.

Spanish is also more prominent in the UK today than it was in the past. The British Council’s report Languages for the Future identifies Spanish as the most important of all global tongues for Great Britain due to, among other factors, its usage in high-growth export markets. According to Goldman Sachs, three of “Next 11” – that is, the 11 fastest-growing markets in the developing world – are Spanish-speaking countries, while no other language is represented on the list more than once.

In yet another indication of the perceived importance of the language, across the globe in South Asia the government of the Philippines has expanded Spanish instruction in public secondary schools in an effort to restore the four-centuries-old cultural and economic ties between the Philippines and Spain. The Filipino government considers Spanish proficiency one of the key assets its citizens can use to leverage future employment and trade opportunities.

Furthermore, the chart below shows the top languages used on the Internet. Spanish ranks third, with an 8% share of a medium expected to reach three billion users this year. 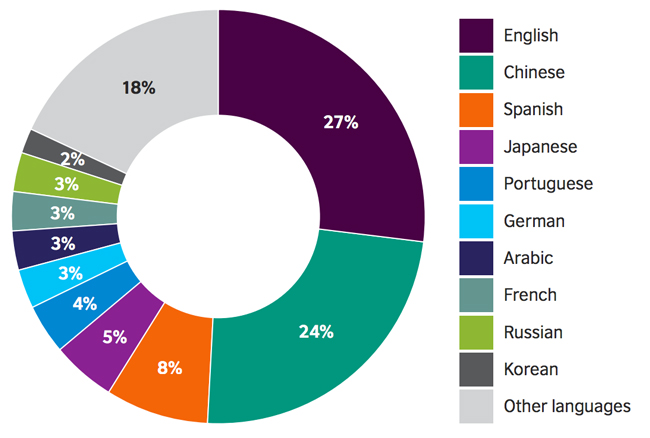 Spanish plays an important role in global industries such as tourism and media, but is also growing within the realm of science. According to the Cervantes Institute, the number of scientific journals using Spanish constitutes 5% of the total, which represents a 130% increase since 2001. In addition, the number of Spanish journals included in Thomson Reuters’ annual publication Journal Citation Reports has increased fivefold since 1998.

Part of the language’s heightened stature may have to do with its mother country. Spain’s status in a number of scientific disciplines has improved in recent years, with 235,228 scientific documents produced between 2006 and 2010 by at least one author residing in Spain. Data from the National Evaluation and Foresight Agency shows high representation for Spain in scientific articles concerning space sciences, medicine, agricultural sciences, energy, physics, zoology, botany, and ecology.

Demand for Spanish language studies has been strong and growing over the past decade and current trends suggest that interest in learning the language will continue to strengthen in the years ahead.

At a time of demographic growth and increasing importance in key areas of commerce and science for Spanish, the timing for the launch of the new SIELE is strong. King Felipe explained during the unveiling that, “If we want our language to reaffirm itself as the world’s second language of communication, we have to move beyond a short-term, self-absorbed vision, and pool everyone’s resources to achieve a goal that will benefit us all.”

But in addition to helping consolidate Spanish as one of the key languages of the future, the new proficiency certification offered by the SIELE is also well-timed for students. Globally recognised Spanish proficiency may lead students to new educational options in low-tuition countries such as Spain and Mexico, while later opening doors to employment opportunities in high-growth nations, as well as in more established markets, such as the United States, where Spanish continues to play an important role.