You can count investment deals in the education technology sector a number of different ways, particularly depending on how you define “ed tech” in the first place. The latest figures for the first half of 2015 certainly reflect this variability, with some of the more prominent investment tallies ranging from US$1.6 to US$2.5 billion worldwide.

But is a photo sharing app ed tech? And should we include that new classroom management software? Leaving aside the nuances in some of these deal counts, a few things are quite clear at the midpoint of the year.

First, investment in education technology is on the rise and has reached a new high. Ambient Insight counts US$2.5 billion in deals over the first half of the year, a figure that is already greater than Ambient’s total for all of 2014. The Ambient tally highlights 262 deals that were done between January and June 2015, reflecting a 66% increase over the total for the first half of 2014. 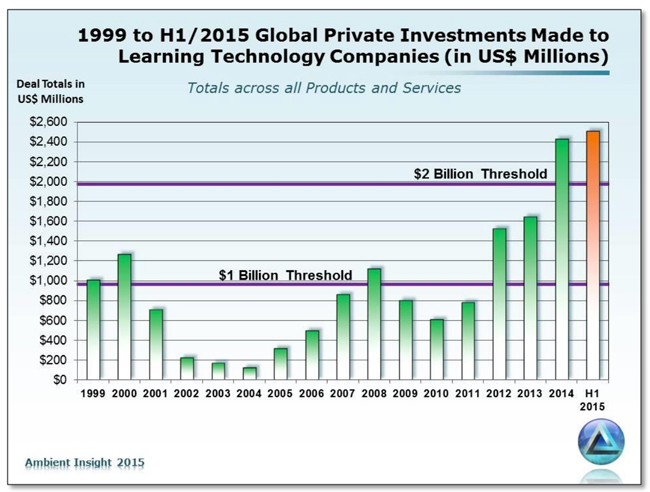 A more conservative count from edSurge finds a worldwide total of 161 investments for the year-to-date (YTD) June 2015 with a combined value of US$1.6 billion. Sector investment, merger, and acquisitions activity slowed gradually over 2013 and 2014, but has certainly spiked again in 2015, as the following chart reflects. 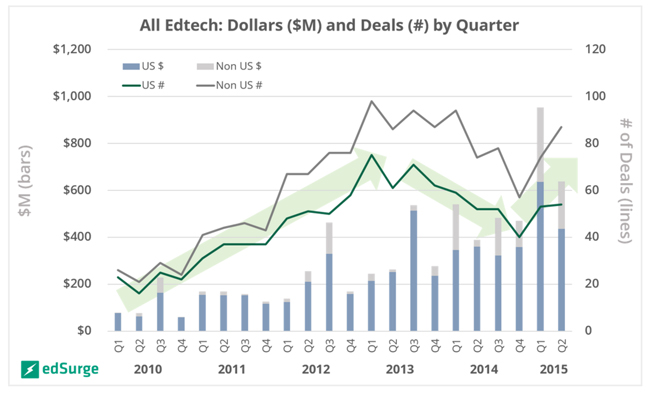 A recent market brief from investment banking firm Berkery Noyes takes a broader view and points out that private investment activity is on the rise across education sectors. “If you look at the activity in terms of the volume of transactions, we’re at the highest level in the last two and a half years,” says Peter Yoon, the firm’s managing director.

The Berkery Noyes tally reports a 9% increase in deals in the first half of 2015, as compared to the last six months of 2014. Deal values, however, rose even more for a 29% increase and a total of US$6.11 in education sector investments YTD June 2015. Even so, and as the following chart reflects, ed tech accounts for a significant share of that overall growth in investment, merger, and acquisition activity for the first half of 2015.

While the larger deals – notably LinkedIn’s US$1.5 billion acquisition of online training provider Lynda.com – tend to attract the lion’s share of attention, Ambient points out that just over half of all 2015 investments in the sector are for US$10 million or less.

Many observers agree that this growing investment in ed tech is being driven by strengthened public funding in some jurisdictions, but also by new business models and the increasing adoption of technology at all levels of education.

Perhaps most tellingly, increased investment in the sector also says something about investor belief in where the market (and education more broadly) is going next. “These investor dollars are a road map for where you’re going to see higher education go in the future,” says Trace Urdan, an independent analyst in the sector.

“Technology is a key enabler for success,” adds a September 2014 report from BMO Capital Markets. “In certain sectors, particularly postsecondary, an online delivery model has become more accepted and fewer quality-related questions are being asked… Those traditional education providers that smartly incorporate technology in their existing offerings should have a competitive advantage.”

China is becoming a bigger player

While the US continues to account for a fair bit of investment activity in the sector, China has emerged as both an important host and source of significant investments this year.

Investment in the sector in China is especially concentrated in mobile learning, with “investors particularly attracted to companies that develop mobile English language learning apps and mobile edugames for young children.”

The report notes India and Brazil as two other markets that have attracted greater investor interest for ed tech in 2015. While both remain far below the investment levels seen in China this year, both have also seen significant growth in deal volumes and values through June 2015.

In contrast to investment patterns of several years ago, the latest tallies reflect that the bulk of new money in the sector is going to support consumer-facing education technologies – that is, products or services marketed directly to consumers.

This is an important indicator of the growing mainstream adoption of learning technologies. Of particular interest to international educators, Ambient reports that online language learning is the top selling learning product type in every consumer segment across the globe.

Consumer-facing investments for the first half of 2015 totalled US$1.4 billion, and, in keeping with the theme for this year, already surpassed the US$984 million in financing for consumer ed tech in all of 2014.