A newly released survey of 5,550 parents in 16 countries around the world finds that most – 77% – would consider sending their child abroad for either undergraduate or postgraduate studies.

Learning for Life is the latest instalment in HSBC’s The Value of Education research series. It was published earlier this month by HSBC and is based on a nationally representative survey of parents in each country who have at least one child aged 23 or younger. The survey was conducted online in March and April 2015 by Ipsos MORI (with supplemental in-person interviews in the UAE). 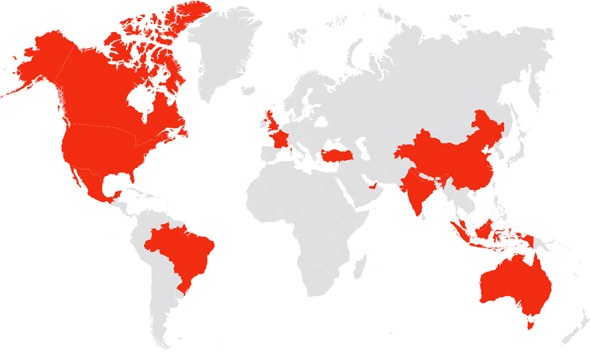 The 16 countries in HSBC’s research sample for Learning for Life. Source: HSBC

“Parents in Asian countries are most receptive to the idea of sending their child abroad for undergraduate study,” says the report. “Four in five parents in Malaysia (80%) and nearly three-quarters in Hong Kong (74%), Indonesia (74%) and Singapore (74%) would consider the idea. In contrast, only around half of parents in Canada (51%), Australia (52%) and France (53%) would consider it.”

HSBC highlights a number of countries as potential hotspots for postgraduate demand. Parents in India (88%), Turkey (83%), China (82%), and Malaysia (also 82%), were especially likely to consider postgraduate studies abroad for their children.

More broadly, half of all parents responding to the survey believe that their children’s generation has more opportunity for study or travel abroad than did their own generation. Nearly eight in ten (78%) saw the prospect for students becoming more knowledgeable about the world as a key benefit of a university education. And just over half (51%) valued study abroad as a chance for their children to live overseas and experience different cultures.

Most prepared to pay more for university abroad

Just over a third (34%) of parents who would not consider study abroad for their children said that cost was an issue. Interestingly, perceptions of the relative quality of education also figured significantly in parent’s interest in study abroad. “The quality of education available is also a factor in deterring parents from considering an international university education for their children,” says the report. “Of parents who would not consider this option, over a quarter (26%) think that their home country offers a superior university education; rising to around half in Singapore (53%), Malaysia (48%), and India (47%).” 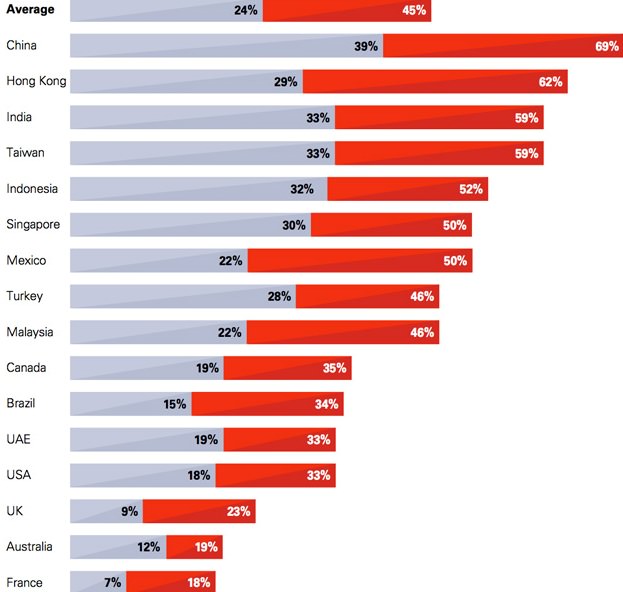 Percentage of parents in the HSBC sample who would consider paying either a quarter more (shown in grey) or up to 50% more (shown in red) for university studies abroad. Source: HSBC

Needless to say, the HSBC effort is a high-level survey covering a wide range of developed and emerging economies and, particularly in that context, global findings have to be considered very carefully indeed. However, the overall impact of the HSBC research is to create an evidence-based sense of perspective from the marketplace. Given the key role that parents play in the study abroad planning of many students, that is a highly valuable perspective indeed.

The first report in The Value of Education series last year provided similarly interesting insight as to the parents’ view of the relationship between price and perceived quality. Readers are encouraged to review our earlier report on the 2014 research for additional background and summary findings.