There is more and more evidence to indicate that the time-worn trade in fake academic degrees is now operating on a new and increasingly international scale, thanks in part to the Internet but also to the aggressive tactics of present-day fraudsters. While detailed statistics are hard to come by, recent revelations of large, highly organised, and global frauds have shone a harsh light on this murky territory.

They also provide the important context for the UK Department for Business, Innovation and Skills’ (BIS) announcement earlier this month that it has commissioned a new service to “address issues concerning fake institutions, while also tackling the related area of degree fraud.”

The new programme, offered in cooperation with the academic and career advisory firm Prospects and its Higher Education Degree Datacheck (HEDD) service, will focus on raising the awareness of the issue among students, educators, employers, and other stakeholders, but also on increasing the prosecutions of unaccredited institutions and online fraudsters. 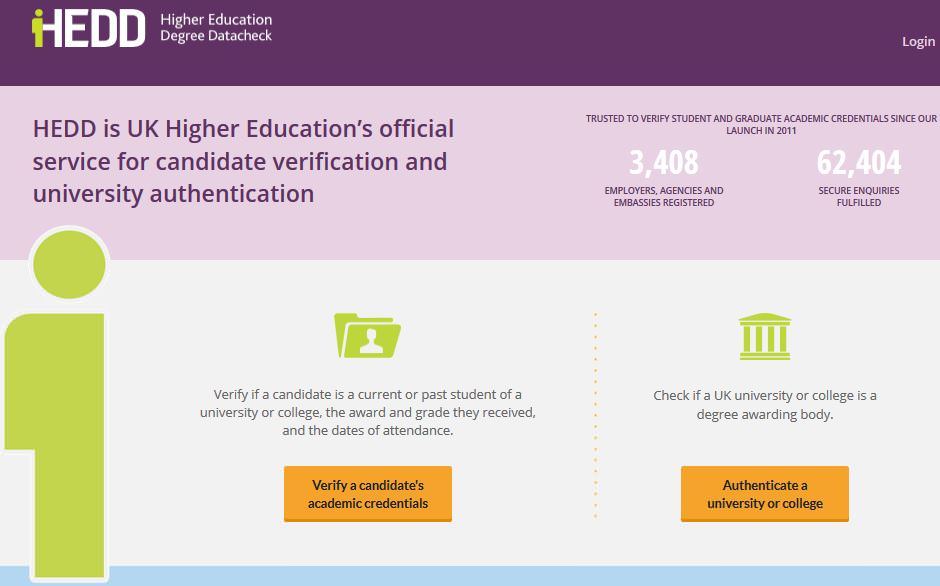 Under this new collaboration between Prospects and the BIS, HEDD will target “bogus universities and perpetrators found to be masquerading online as genuine institutions with degree-awarding powers.” Any such cases will be added to the system’s database of fraudulent institutions. But HEDD will also pursue the matter by conducting an investigation to determine who owns the phony website or websites in question and where they are hosted. It will then liaise with the UK’s Trading Standards agency and other enforcement bodies to prosecute the owners of fake institutional sites and force their closure.

“We have appointed Prospects to help us expose unscrupulous organisations and remove misleading websites wherever they make an appearance,” said Jo Johnson, the Minister of State for Universities and Science, in his 1 June 2015 announcement of the new service during the recent Going Global conference in London. “Such action is in the interest of all legitimate providers and genuine students because it will help protect the reputation of the UK as a provider of high-quality education.”

In addition to the monitoring, investigative, and liaison functions noted above, HEDD has also launched a new telephone tip line for fraud reports, and will shortly expand its advisory services for employers and, as of July, for institutions who are being victimised by phony university websites.

Since its inception in 2011, HEDD has identified 190 fake institutions, many of which came to light in the course of the service’s attempts to verify academic credentials on behalf of employers.

“Degree fraud is a serious problem,” says Prospects’ Business Service Director Jayne Rowley. “In the first quarter of this year alone we added 42 bogus institutions to the database and there are thousands of fake degree certificates in circulation.”

Indeed, recent reports suggest that contemporary fraud is reaching an unprecedented scale. The New York Times, for example, reported on one case last month involving a network of as many as 370 phony university sites. The network, The Times has reported, originates with Axact, an IT firm based in Karachi, Pakistan, and is estimated to have generated tens of millions of (US) dollars a year in tuition and related fees. 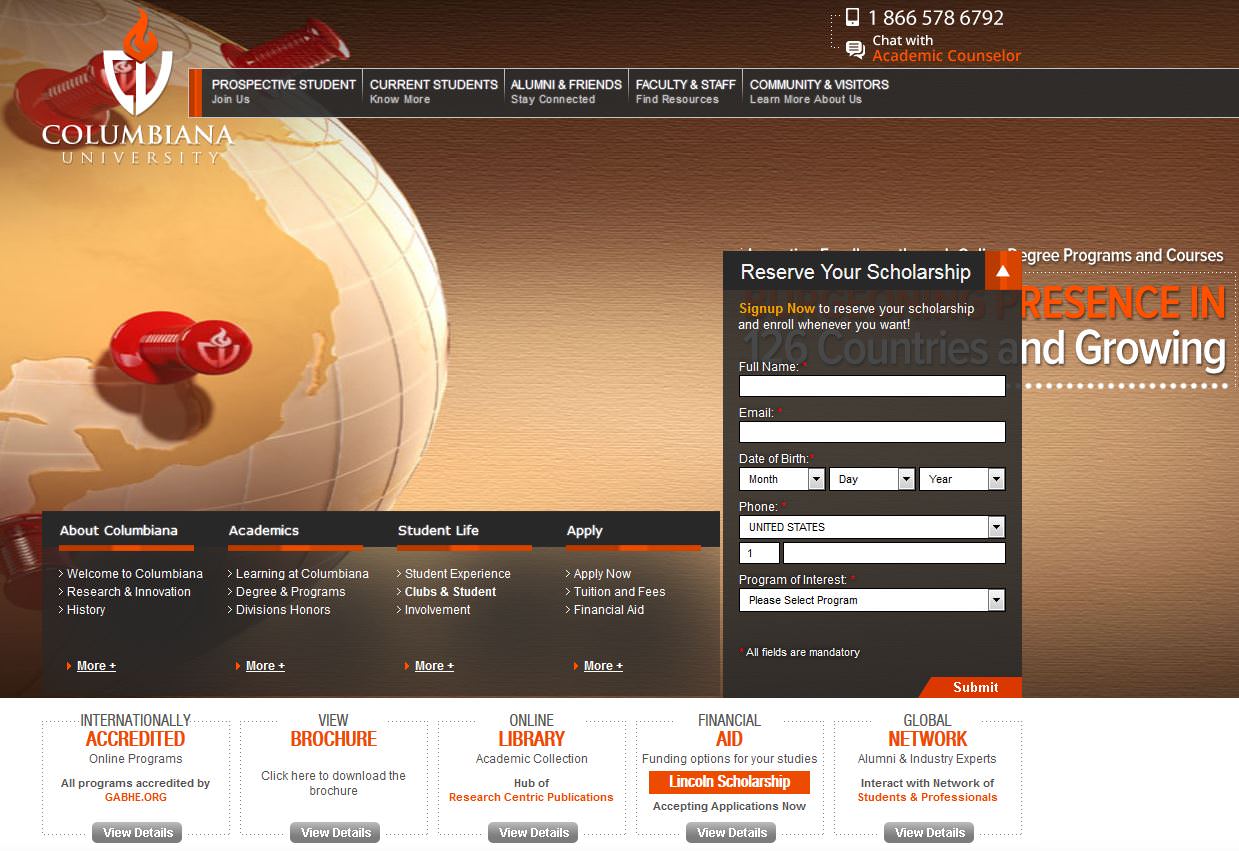 A screen capture of the website for Columbiana University, a phony institution recently linked to Axact in a New York Times report. The Times said of the Columbiana example, “This and other Axact sites have toll-free American contact numbers and calculatedly familiar-sounding names.”

For its part, Axact has publicly and vigourously denounced the charges. However, the company’s CEO has since been arrested, its offices have been raided by authorities, and the Pakistani government has formally requested the assistance of both the FBI and Interpol in what will clearly be large-scale, international investigations into Axact’s activities.

The scale of the company’s alleged fraud is difficult to contemplate. The Gulf News tabloid Xpress has reported that Axact sold as many as 200,000 phony credentials to students in the Gulf States alone.

A former Axact employee, who recently left the company and is now an important witness in the developing investigation, has described the three main ways in which Axact generated revenue from the alleged fraud: “Priority learning assessment (PLA), research and sponsored programmes (RSP), sale of degrees and legalisation/attestation through [government offices]… In September 2014, the month before I quit, the firm made US$800,000 from PLA, US$400,000 from RSP where PhD aspirants seeking help for writing theses were directed to other websites operated by Axact. Sale of degrees accounted for US$1.7 million.” 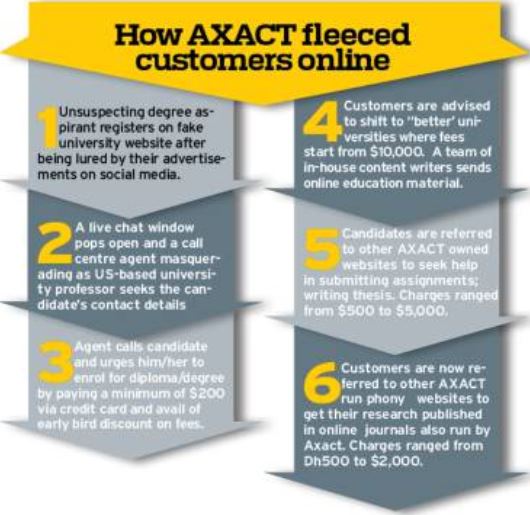 Another report from Al-Fanar Media earlier this year points again to a large network of fraudulent sites and institutions targeting students in the Gulf region and beyond. Al-Fanar described the fraud as: “A global network of fraudulent online universities is using high-pressure sales tactics and phony scholarships to extract money from students who end up with worthless degrees.”

Aside from the border-crossing scale of such fraud, it is also sometimes hard to separate the victims from the willing co-conspirators. Some students who obtain phony degrees are well aware that they have purchased an illegitimate credential. Others are duped out of large amounts of money only to realise too late that their degrees are not worth the paper they are printed on.

“Absolutely, there are fraudsters who are trying to pass them off as real to employers,” HEDD’s Ms Rowley explained recently to the International Business Times. “But there are people who are innocent and in some cases are paying five figure sums. The extent of the problem is unknown because employers take them at face value. People are complacent because they take the bogus diplomas as real.”

Getting up to scale

The BIS-Prospects initiative in the UK is significant for its profile and government engagement. It also suggests that, for the UK at least, the official response to degree fraud on a global scale is to take steps to ramp up investigative and enforcement capacity accordingly.

And if the Internet is aiding the fraudsters it is also a potent tool in the hands of an equally global and growing network of verification services within government, among institutions, and in the private sector.

Ms Rowley says of the BIS-Prospects partnership, “While HEDD has made it easier to verify whether an institution is genuine we now have the structure in place to investigate and report fake university providers to the relevant authorities… We’re also working with organisations in other countries and have already started to forge relationships with our equivalents in Australia, China, the Netherlands, South Africa, Sweden and the USA.”