A July 2014 report commissioned by the Center for Academic Mobility Research and Impact at the Institute for International Education (IIE) finds that the number of inbound international students studying at the secondary school level in the United States tripled between 2004 and 2013, and that this cohort now outnumbers those travelling to the United States for short-term exchange programmes.

The report also suggests that the key sending countries for international high school students to America (China, South Korea, and Germany) are, with small variations, similar to those for other major English-speaking study destinations, such as Australia, the UK, and Canada.

Charting new pathways to higher education draws on data from the Student and Exchange Visitor Information System (SEVIS) of the Department of Homeland Security. The SEVIS data reflects students enrolled in schools and exchange programmes in the United States in October 2013. This data was then merged with school data from the National Center of Education Statistics’ (NCES) Common Core of Data and the Private School Universe Survey (PSS). Interviews were also conducted with professionals involved in the mobility of international secondary students to provide a qualitative perspective on trends.

Most international secondary students are from Asia

The IIE commissioned the report in part to understand the shifting mobility patterns of international secondary students in the US, and to better understand this cohort’s tendency to continue to postsecondary study in America.

Authored by Christine Farrugia, the report found that 73,019 international secondary students studied in the US in 2013, two-thirds of which (48,632 students) were enrolled in full diploma programmes.

Of the total international secondary enrolment in the US, 57% come from Asia. The top five sending countries were:

Of the total number of international secondary students, 67% (or roughly 49,000) were engaged in longer-term studies to earn a US high school diploma, with the rest taking part in short-term exchange programmes. Students in each group are distinguished in part by the class of visa they hold in the US.

The report summarises: “67% held F-1 visas, indicating that they were directly enrolled in a US high school, either for a long-term programme of one academic year or more or a shorter term programme. Students holding J-1 visas (33% of international secondary students) participated in exchange programmes that allow students to study at an American secondary school and live with a host family or at a boarding school.”

Interestingly, while Asian students made up the bulk of those studying full diplomas (Chinese students alone comprised 46% of diploma students), 66% of the 24,000 exchange students were from Europe.

Ms Farrugia makes an interesting distinction between exchange enrolments (i.e., those students enrolled for shorter-term studies of a year or less) and those who intend to complete full high school diploma programmes. “Many secondary students from Europe and Latin America engage in short-term exchange programmes, including students from Germany who make up almost 10% of all international students in US high schools,” says the report. “In contrast to European and Latin American students, many of whom pursue US study for reasons of cultural exchange, many students from Asia enrol in US secondary schools to earn full degrees in order to prepare themselves for admission to US higher education institutions.”

Sources of international secondary students in the US by world region, 2013. Source: IIE

Another of the report’s key findings is that the overwhelming number of full diploma students (95%) end up at private high schools, including independent schools and religiously affiliated schools. The report notes that “current US visa policies restrict F-1 students to no more than one year of study in public schools, which means that international students are not able to enrol in public high schools for multiple years to earn a high school diploma. Given these visa restrictions, international programmes at public schools function more like exchange programmes than those at private schools.”

A more recent, related report from the National Association of College Admissions Counselling (NACAC) highlights again the concentration of active recruiting and enrolment in US high schools. The NACAC survey finds that only 14% of American secondary schools are actively recruiting international students. And, as the following chart illustrates, those schools rely heavily on international education agents (71.4%) and education fairs (32.4%) for their international recruiting efforts.

The IIE report also notes great variations among where international diploma and exchange students choose to study in the United States. California, New York, and several other Eastern states host the majority of full diploma students, whereas the leading host states for exchange students are Michigan (9.8%), Texas (6.9%), California (5.8%), Wisconsin (4.6%), and Minnesota (4.6%). 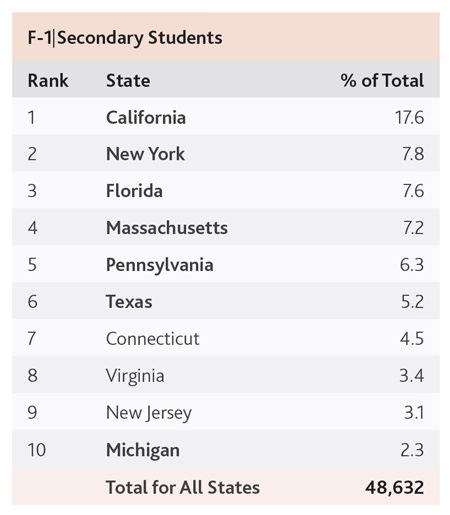 Other states that host large numbers of students at both levels include Florida, Massachusetts, Pennsylvania, Texas, and Michigan.

The US in a global context

The report also places trends in international secondary mobility in a global context, finding similarities and differences between the American market share and that of competitor countries, such as Canada, Australia, and the United Kingdom.

Ms Farrugia notes that “many students studying in Australia, Canada, the US, and UK share similar motivations of seeking a secondary school credential in the host country as a pathway to postsecondary education in that country or in another Anglophone country.”

Asian students, particularly from China and South Korea, are highly represented across all Anglophone countries. However, while Hong Kong is the top place of origin among international students at UK independent schools – a situation the report attributes to historical connections between the UK and Hong Kong – Australia is attractive to Asian students because of its close physical proximity.

The report highlights potential implications for international marketing and recruitment efforts at American postsecondary institutions, such as greater awareness of the ability to recruit international students through local high schools and the potential for developing clearer pathways between secondary and postsecondary programmes.

Speaking to University World News, Dr Rajika Bhandari, director of the IIE’s Center for Academic Mobility Research and Impact, said “US institutions are going to need to think about where they recruit and how they are recruiting international students because it is no longer going to be the case that all potential international students are based overseas. Some of them might be based right here at home in secondary schools.”

“The research is important not just for the US,” he added. “If mobility at the secondary level is going to serve as a pathway into higher education, then it is something we should be looking at globally.”