With so many recent changes and reforms to Slovakia’s primary, secondary, and tertiary education systems, the government’s demonstrated willingness to learn from other jurisdictions, and a strong and steady history of outbound mobility, opportunities exist for deepening educational links in this corner of Central Europe.

Tucked behind the Cold War’s Iron Curtain from 1946 to 1989 as part of the Czechoslovak Republic, and comprising one-half of Czechoslovakia following the 1989 Velvet Revolution, Slovakia became an independent republic in 1993. Slovakia today is a parliamentary democracy with a president as head of state. Slovakia became a member of the European Union in 2004. The country is divided into eight administrative regions, with Bratislava as the capital and most important city. 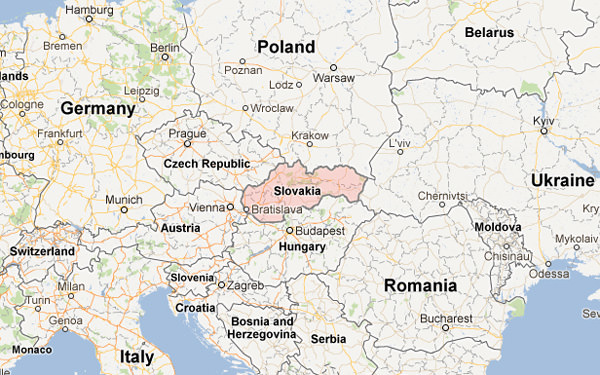 Coupled with a strict immigration policy that resulted in low numbers of annual permanent immigrants, the current Slovak population is projected to decrease by 0.3 million people by 2060. The 2011 census in Slovakia showed that more than 80% of the population declared Slovak nationality, with minority populations of Hungarians (8.5%) and Roma (2%).

The period for compulsory school attendance in Slovakia is set at ten years and begins at the age of six, and the academic year runs from September to August. The OECD estimates primary school enrolment at 427,000 students and secondary enrolment at 227,000 students as of 2013. The following chart provides an overview of the entire system. 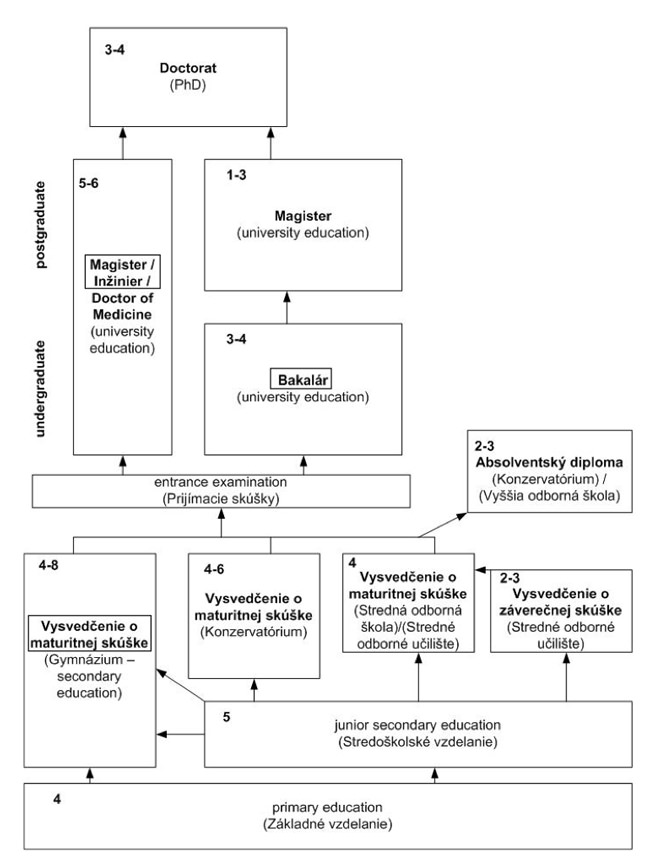 A 2015 OECD report outlines key recent reforms to the nation’s education system. Most notably, in 2001, the government approved the National Program of Upbringing and Education in the Slovak Republic (also known as Millennium).

Under the Millennium programme, the school system was decentralised and funding of basic and secondary education fundamentally changed to allow greater autonomy at the school level. Further changes defined minimum content, primary skills and quality to be provided to all students under the National Education Programs (NEP) in the form of education standards. Education standards were developed to define “output requirements” for various levels of education and to move towards a competency-based approach to learning. Simultaneously, schools were given leeway to create programmes to respond to local needs and concerns.

Changes to Vocational Education and Training (VET) were also introduced to improve the relevancy of the VET sector to ongoing labour market needs. VET councils have been established to better coordinate training requirements between business and education sectors. Additional changes were introduced to more clearly define a career system and career levels for teachers, including a clear path for salary increases and allowances for professional development.

The Slovak Chamber of Teachers has raised concerns that fundamental changes in education are made too often. The Ministry of Education, aware of perceived policy gaps, recently established the Educational Policy Institute (EPI) to draw policy best practices from other countries and to provide advice to the government on strategic policy decisions.

A further OECD report from 2014 highlights concerns about a correlation between student socio-economic status and student performance. Students from rural areas have also been found to significantly underperform their peers in larger cities.

In line with the Millennium programme, full cohort national assessments in mathematics and Slovak language and literature were introduced for Year 9 students in 2009. Initiatives to develop key competencies for teachers, part of a commitment to developing higher teacher standards, were introduced in 2006 and updates piloted in 2013. Overall, support for the observation and improvement of classroom practices is broadly accepted among education stakeholders.

In 2013, 11,102 international students studied at the tertiary level in Slovakia, comprising 6% of the total postsecondary population. The largest numbers arrive from the neighbouring Czech Republic. Of these, approximately 45% study at the undergraduate level and the remainder at the graduate and postgraduate level, according to figures provided by Institute of Information and Prognoses of Education. Comenius University hosts the largest number of international students of any public Slovak university, welcoming 2,348 foreign students in 2013.

At the tertiary level, the main language of instruction is Slovak. However, a number of programmes are delivered in English, with plans to expand these in the coming years. Limited programmes are also offered in German, Italian, Russian, and French.

As part of the Bologna process, the European Credit Transfer and Accumulation System (ECTS) was introduced in 2002 for all levels and forms of higher education study.

Full time study at state and public higher education institutions is available free of charge for citizens of the Slovak Republic. Nationals of the European Union, European Economic Area, and Switzerland do not pay a tuition fee if they study a programme offered in the Slovak language. For other foreign students, the tuition fees for study programmes at any level apply and are set by each institution.

According to the latest UNESCO statistics, 33,127 Slovak students studied outside the country at the postsecondary level. The top destinations for tertiary level students from Slovakia include:

As well, more than 3,000 Slovak students were estimated to have studied English abroad in 2011.

Other OECD researchers have flagged ongoing concerns with labour market outcomes among Slovakia’s higher education graduates. Youth unemployment in Slovakia – which was pegged at 33% in 2011 – is the third-highest in the OECD and is among the highest in the EU, a trend the report links in part to a mismatch between graduate skills and current labour market needs. The country’s Roma population and those living in remote regions face even greater barriers to employment.

A February article in the Slovak Spectator echoed the concern with weak school-to-work transition among Slovak’s young people. The article highlights findings of a survey published by the Education Ministry that found that 46% of university graduates have never worked in the field in which they studied. Furthermore, the data also suggests that a major gap exists between the salaries of those trained in technical fields as opposed to the humanities.

Education Minister Juraj Draxler suggests the ministry is willing to adopt changes in the university system to help students select the best school for their further studies and to improve their chances of future employment.

“It simply does not make any sense to finance something from which it is extremely difficult to find a job,” the minister said, as quoted by the TASR news service.

The article also points to concerns over funding. According to Viktor Smieško, chairman of the Council of Universities, higher education institutions are funded based on overall student numbers, which encourages institutions to take on students who may not be adequately qualified. Instead, he suggested financing should be tied to internationally accepted standards and outcomes. The state should also clearly mark its elite universities and fund these accordingly, he said.

Slovakia’s commitment to the Bologna Process and its focus on expanding English-language programmes to better attract and serve international students within its borders speaks to a broader opening up of internationalisation efforts within the country, a trend that appears set to continue in the years ahead.