The US is well understood to be the world’s leading international study destination. Less commonly known is the fact that it is also a major source of internationally mobile students, with 289,408 American students having studied abroad for academic credit in 2012/13. Indeed, there are substantial initiatives underway to double the number of US students abroad to 600,000 students by 2017/18.

Foreign-language competency is an important enabler of study abroad for all students and so the findings of the latest Modern Language Association (MLA) enrolment survey – showing that US enrolment in foreign-language studies has slipped in recent years – have caught the attention of international educators around the world.

The survey found that US enrolment in foreign-language studies fell by 6.7% over those five years. “Thus ending a steady rise in enrolments since 1980 (with the exception of a slight dip in 1995).” As the following chart reflects, overall enrolment in US foreign-language programmes grew from 877,186 in 1980 to a peak of 1,621,059 in 2009, before dipping to the latest-reported levels in 2013. 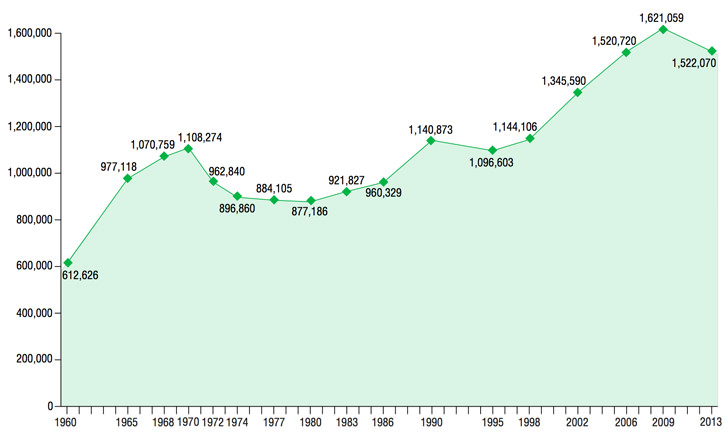 US enrolment in foreign-language studies, 1958 to 2013. Source: Modern Language Association

The report adds, “The drop in 2013 should be understood in the broad context of a reported decrease in the overall number of enrolments in higher education for a second consecutive year.”

On that point, the United States Census Bureau reports that higher education enrolment in the US declined by 463,000 students between 2012 and 2013, the second consecutive year for which a decrease of that magnitude had been observed. The Census Bureau adds that, “The cumulative two-year drop of 930,000 was larger than any college enrolment drop before the recent recession.”

Even accounting for that decline in enrolment, however, it seems clear from the survey data that the level of enrolment in foreign language studies (relative to total higher education enrolment in the US) has indeed declined over the most recent survey period. The following table illustrates that enrolment in language courses, per 100 higher education enrolments in the US, fell from 8.7/100 students in 2009 to 8.1/100 students by 2013. This represents a decrease of 6.9% and tracks reasonably closely with the 6.7% decline in head count enrolment reported by MLA for the current survey period. 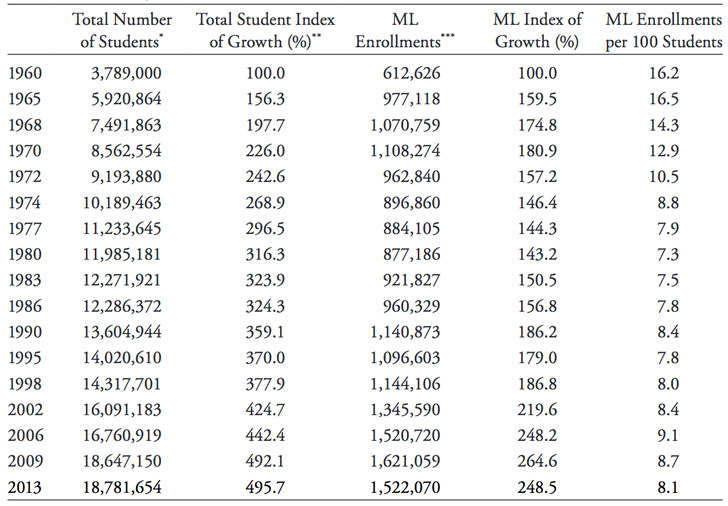 Spanish and French remain as the two most-studied foreign languages. Indeed, enrolment in Spanish language studies (790,756 students as of fall 2013) continues to exceed that of all other languages combined (771,423 students).

Even so, Spanish enrolments fell at every institutional level – two-year, four-year, and graduate degree-granting institutions – for the first time ever, declining 8% over the survey period. The broader picture provided by the survey results is that the language interests of US students are becoming more diverse over time.

MLA Executive Director Rosemary Feal says of the most recent survey, “This suggests that students in US classrooms have more options than they had in the past. They may be coming from high school with knowledge of a language other than Spanish or French, and they are taking advantage of the impressive array of offerings at the college level.”

In fact, the survey shows that some languages did register strong enrolment gains from 2009 to 2013. Aside from American Sign Language (the third most-taught language in the US, other than English), Chinese language studies saw a small increase while Portuguese and Korean enrolments recorded stronger growth at 10.1% and 44.7% respectively (albeit from relatively small enrolment bases in 2009).

The following table provides an overview of percentage growth for the most-studied languages in the US from 2002 through 2013. The languages are listed in the table in descending order based on 2013 enrolment. 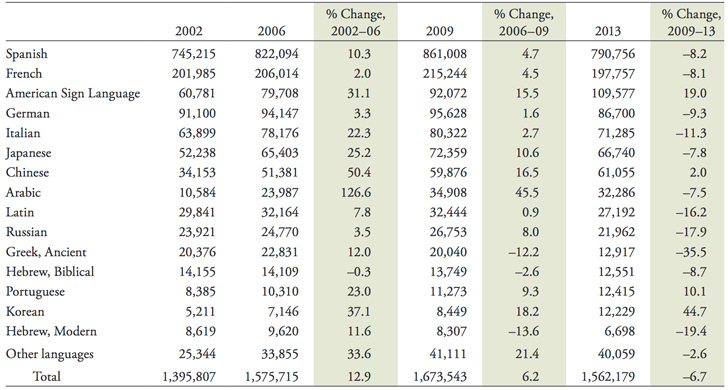 The MLA also reports a higher level of enrolment in advanced language studies at the undergraduate level – that is, in third- and fourth-year classes – for six languages over the period 2006 to 2013: American Sign Language, Arabic, Chinese, Biblical Hebrew, Modern Hebrew, and Japanese. The percentage of enrolment in advanced classes also increased for Greek, Russian, and Spanish from 2009 to 2013, and, as of 2013, advanced classes accounted for 20% or more of the total enrolment in Chinese, Biblical Hebrew, Portuguese, and Russian language courses.