International education is one of the industry sectors most heavily dependent on, and enabled by, social media and the Internet. It can’t help but be, given that prospective study abroad students most often live far away from the institutions they’re interested in attending. Therefore, students – especially those who cannot manage a campus visit before applying – look to institutions’ websites and social media platforms for evidence about how good, or ill-suited, a school likely would be for them.

The catch with social media is, well, it’s social. It’s a forum for conversation, not one-way promotion. This is largely why it’s so powerful: when people like a brand, they say so very publicly, to their friends and followers who may then share the positive impressions still more widely. But of course the reverse is true as well: negative feedback was never so damaging or visible before social media.

This ICEF Monitor article looks at best practices for managing negative feedback posted on websites and/or on social media platforms.

When we look at the various ways in which brands manage negative comments about them on the web or social media, it’s important to acknowledge that a common fear lies at the heart of every response:

What if the comment convinces our target market to turn away from our brand?

And also, with specific reference to imagining the brand as an education institution:

What if the comment provokes still more comments, and word-of-mouth, and the damage becomes still greater? What if it feeds our potential students right into the hands of another institution?

These fears are natural and valid. There are many brands that have suffered substantial problems because of negative comments that gained momentum. So there is no sense in discounting the fear many institutions have about the potential for negative comments.

But there is this reality: every brand active on social media with stiff competition and a sizeable audience faces unfortunate or spiteful criticisms posted for all to see.

The issue then becomes more interesting and even productive: how do we manage negative comments in a way that:

“The tricky part is that your social presence acts as the face of your brand. How do you keep it blemish free? The answer is tough to swallow: you don’t. People will always complain. It’s what you do after the complaint that matters.”

We found an excellent example of bad practice in managing negative comments via an article on the website Opportunity Web 2.0. In this case, the brand being forced to respond was Nestle, which had been facing criticism from GreenPeace because its Kit-Kat chocolate bars included palm oil, harvested in rainforest areas native to orangutans and thus argued to be a destructive practice. Visitors to the Nestle Facebook page began complaining, siding with the GreenPeace point of view, and some changed their profile pictures to altered versions of the Nestle logo (e.g., replacing “Kit-Kat” with “Killer.”)

Nestle’s social media managers responded with public reactions like this:

“To repeat: we welcome your comments, but please don’t post using an altered version of any of our logos as your profile pic – they will be deleted.”

At least one commenter then responded that this was a “Big Brotherish” policy, and that social media was about “embracing your market” rather than punishing it. Things unravelled from there, as you can see in the following screen capture from the Nestle Facebook page: 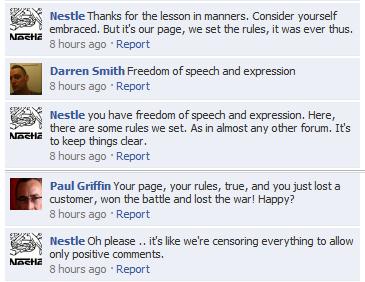 It’s not that Nestle didn’t have a point regarding the protection of its intellectual property rights; it’s that they responded:

Cumulatively, the response became much more damaging to the brand than the initial protests against its practices. Now not only was the brand pursuing a manufacturing policy that was objectionable to some vocal critics, it was proving itself to be dismissive and combative with the public.

Eventually, the standoff ended with this from the Nestle representative:

“This (deleting logos) was one in a series of mistakes for which I would like to apologize. And for being rude. We’ve stopped deleting posts, and I have stopped being rude.”

The apology was definitely necessary but it was unfortunate that it had to come to that.

TodayMade, a company that helps brands manage their social media accounts, makes a good point that not all negative comments are the same. In fact, someone reporting a problem (e.g., a website error) is not negative but actually helpful, and responding to them quickly makes them feel valued and helps the brand improve.

TodayMade differentiates between the various kinds of problem-based public comments posted on a brand’s social media accounts, and explains what kind of response each deserves. We have quoted their advice below (with minor revisions) and compiled it into what we hope is a helpful table: 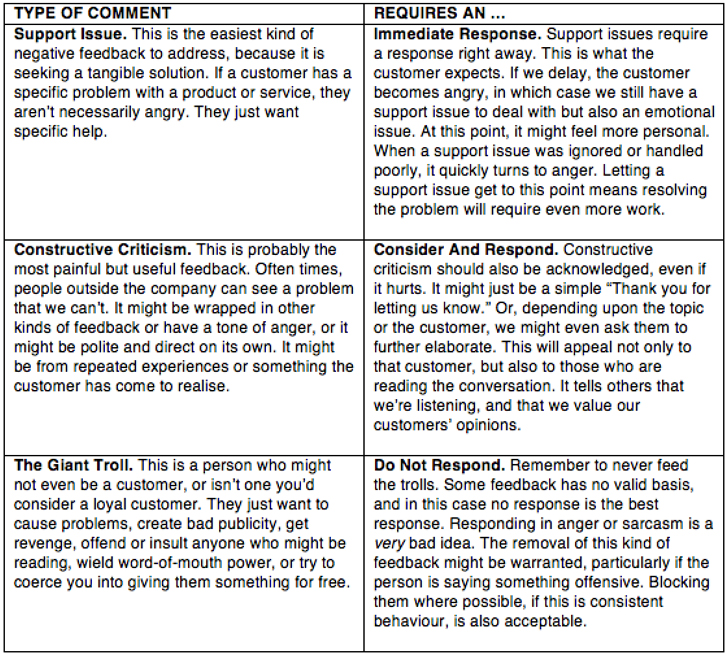 Why segmenting types of comments is important

Social media is fast. It often provokes knee-jerk opinions and reactions resulting in conversations that can get heated and emotional very quickly, and often unnecessarily. Each negative comment deserves to be considered carefully – segmented as in the above table – before a response is issued.

Nevertheless, whatever kind of comment – or noted support-issue ­– an institution or agency is faced with, it is generally a good idea to respond in some fashion, and with a generous, solution-based attitude to encourage the best possible resolution. There are caveats, of course:

Be prompt, but also be patient

Promptness is essential on social media, but speed isn’t. Promptness is responding to a problem in a timely manner – not letting it drag on unnecessarily. Speed without time taken for consideration, on the other hand, can be dangerous; it can be an emotional reaction. Andy Sernovitz, writing on Social Media Examiner, offers this advice regarding being prompt but patient enough to issue a considered response:

He notes these two advantages to such an approach:

Patience may also open the door for the rest of the social community to chime in. For example, Comment A: “I heard that professors aren’t very good in this programme.” Comment B: “They are! At least in my experience. I had an amazing course with …” The first commenter will likely be more convinced by their peer than by anything the institution might say in response.

A final note on promptness: Ensure you are regularly monitoring the conversations people are having about your institution or agency on the web and social media (for example, using Google Alerts for your brand name and your keywords) is the first step in being able to respond in good time before a student’s complaint gains too much momentum or anger.

When you respond well, it can turn into an opportunity. Mr Sernovitz offers this:

Whenever possible, ask unhappy commenters what you can do to turn the situation around for them, and make it clear that you appreciate their feedback. If it’s a support issue situation (e.g., the Submit button to send in an application didn’t work), post on the comment thread that it’s now been resolved: “Thanks to [commenter]; this has now been fixed and we apologise for any problems this may have caused other users.”

Mr Sernovitz took a screenshot of the social media feed of Graco baby products, which had taken to Twitter to issue a prompt recall of one of its strollers and offer sincere apologies to users: 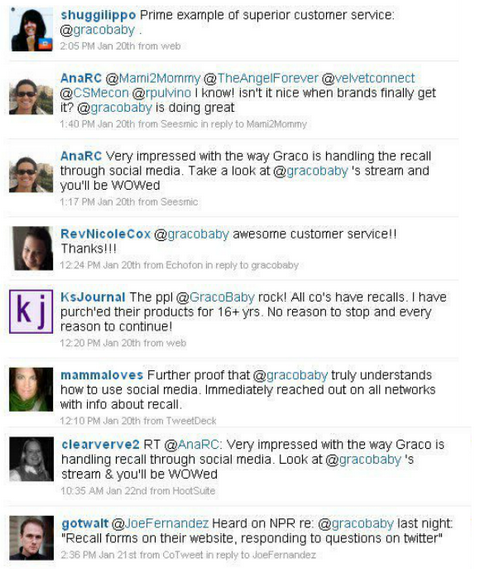 The Graco example impresses this very important point for brands in any category, international education included: nobody’s perfect, we all make mistakes, and apologies matter. There is no way to avoid negative social media chatter – but there are so many ways to manage it, and even turn it into an opportunity.

Finally, help the good outweigh the bad: engage with and reward your social media users for their interest in your brand using everything at hand, from community-only perks, coupons, and discounts to high quality content. A whole lot of positive energy on a social media platform is an amazing way to make any negative outliers take up a lot less space – literally and figuratively.

In our next marketing post, we’ll be looking at new research on what consumers value most on brands’ social media channels, with this very thing in mind. Stay tuned!