Number of Vietnamese students abroad up 15% in 2013

We have published two significant updates on Vietnam over the past 18 months. The first, a guest post from market specialist and international educator Dr Mark Ashwill, provides a strong foundation in the important trends and conditions that have shaped the Vietnamese education market in recent years.

Both posts point to an important education market in Southeast Asia, one where outbound mobility has grown strongly over the past decade and where demand for study abroad continues to be driven by concerns over capacity and quality in the domestic education system, and also by a hot economy and rising family incomes.

The country’s youthful population – 45% are 25 years of age or younger – is therefore highly motivated and increasingly able to pursue studies abroad. As Dr Ashwill has noted, over 90% of outbound students are self-funded and total spending on overseas education amounted to roughly 1% of GDP in 2013.

A market commentary prepared by Canada’s Department of Foreign Affairs adds, “While both parents and students are involved in decision making, parents have the most at stake in the choice of country as they are the main providers of financial support. Students are more influential in the choice of institutions and major.”

Even so, much of the recent growth in international student numbers from Vietnam occurred in the period from 2006 to 2010. Growth was modest-to-non-existent in 2011 and 2012, leading some to wonder if demand in this promising emerging market had started to cool.

If the recently released figures on 2013 enrolment are any indication, however, Vietnam is showing renewed signs of strengthening demand for study abroad and may be poised for further growth.

The Vietnam Ministry of Education and Training reports that 125,000 Vietnamese students studied abroad in 2013. This represents a 15% increase over 2012 and the largest year-over-year jump since 2008/09.

The top ten destinations for Vietnamese students in 2013 (both secondary and postsecondary) were as follows:

In keeping with recent-year trends, the two top destinations – Australia and the US – accounted for about 37% of all outbound enrolment from Vietnam in 2013. Major regional destinations, primarily China, Japan, Singapore, and Taiwan, accounted for another 34%. Interestingly though, Japan became the third-ranked destination in 2013, nudging China out of a spot that it had held for some time.

Australia and the US, meanwhile, have been the top-ranked destinations for several years now. As we noted earlier, “Vietnamese students reportedly regard higher education in the US as ‘the best in the world’ and ‘as a priority worthy of significant financial investment.’… Cost appears to be the main obstacle preventing a greater number of Vietnamese students from pursuing studies in the US… the US is perceived as being more expensive than alternate destinations such as Singapore or Australia.”

An accompanying IIE press release highlights that “there were 73,019 international students pursuing a secondary-level education in the United States, with 48,632 or 67% of these enrolled for a full diploma… Most of the nearly 49,000 diploma-seeking students at US high schools are from Asia (with 46% of this segment coming from China).”

But if the majority of international high school students in the US come from China or South Korea, notable percentages are also drawn from emerging markets such as Brazil, Thailand, and Vietnam. As the following table illustrates, Vietnam accounts for a higher percentage of international secondary school enrolment in the US (3.1%) than it does postsecondary enrolment (2.0%). 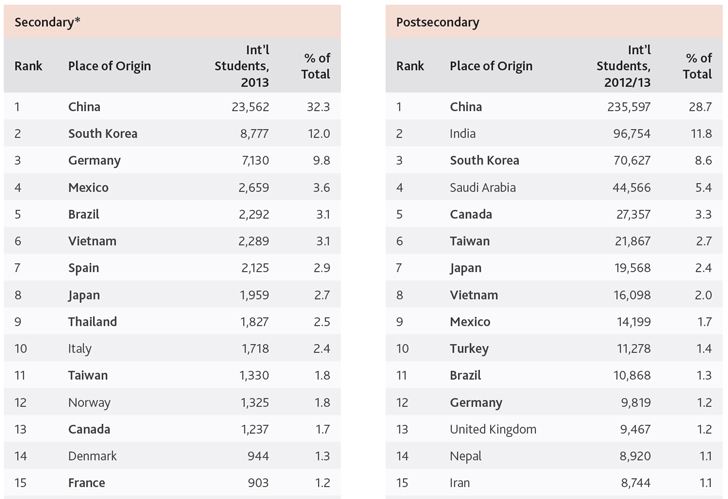 Top places of origin of international secondary and postsecondary students in the US, 2013. Source: IIE

Vietnam was by far the leading Southeast Asian market for US secondary schools in 2013, accounting for roughly half of all enrolment from the region in that year. In Australia, meanwhile, Vietnamese students accounted for 10.3% of international secondary students in 2013, the second-largest national group after only China.

We note that the IIE report shows only data for 2013 and so we are not looking at multi-year trends here. Even so, there at least two interesting implications for recruitment marketing in Vietnam:

Vietnam is a notable emerging market today. If these trends toward increasing outbound mobility along with expanded enrolment at the secondary level continue, it will only become a more important source of international students in the years ahead – both for established destinations such as Australia and the US but also for alternate destinations that can offer a compelling combination of quality and affordability.

This entry was posted in Asia, Higher Education, K-12, Most Popular, Regions, Vietnam.