The substitution effect of transnational education on international student mobility

The Observatory on Borderless Higher Education (OBHE) recently published a paper entitled, Transnational education vs international student mobility: Substitutes or distinct markets? It presents preliminary research on the extent to which transnational education (TNE) acts as a substitute to international student mobility – that is, the extent to which TNE initiatives divert students from studying abroad (or not) by expanding educational capacity in the students’ home country.

In this special guest post, the paper’s author, Dr Vangelis Tsiligiris, the principal of the MBS College of Crete, provides an overview of major TNE types and trends along with some of his key research findings.

Transnational education (TNE) is defined by UNESCO as “all types of higher education study programmes or set of courses of study, or educational services… in which the learners are located in a country different from the one where the awarding institution is based.” This includes, but is not limited to, the following most common types of TNE:

In the early stages of developing programmes in a given host country, TNE is developed as a way to expand supply and improve access to higher education for students who cannot be accommodated by domestic institutions. At this stage, TNE students’ decision-making is primarily geared by push factors (e.g. limited access to education, poor quality of domestic institutions). Partner-supported delivery (e.g. franchise, validation) is therefore often an appropriate form of TNE in early stages of market development.

As domestic capacity develops, students’ decision-making is influenced more by pull factors (e.g. programme quality, reputation of awarding institution, employability prospects). This means that as an offshore TNE market matures, early forms of TNE such as franchising will be less effective to satisfy demand within an increasingly competitive environment. TNE-exporting institutions should consider increasing their physical presence and/or contextualising their programme offerings beyond the replica model at this stage.

At some point, the market reaches a “thrive or die” point where TNE is either integrated or not within the domestic higher education system. As supply expands, if TNE is not integrated in this sense, then the long-term viability of TNE programming in the country will be at risk. This is because TNE programming may appear over time to be inferior to the domestic HE institutions even as TNE-exporting institutions may be constrained in expanding their physical presence in the market. Therefore, the integration of TNE in the domestic system can be seen as a prerequisite for the long-term sustainability of transnational initiatives.

These major stages of market development are reflected in the following figure. 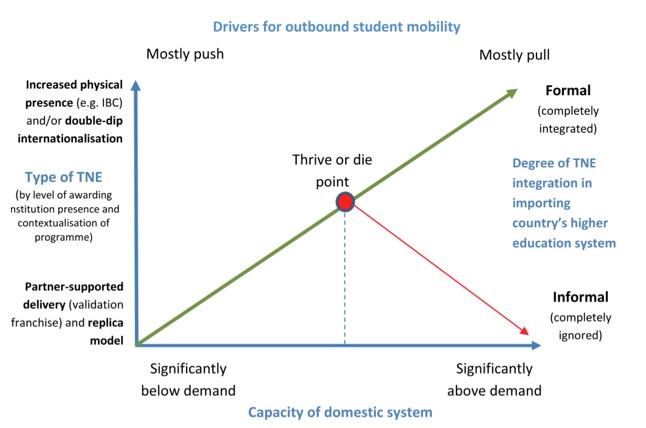 The ongoing expansion of TNE

The past decade and more has seen a marked expansion of TNE activities. This has been particularly true in Asia, where the capacity of local systems has not been sufficient to cover the booming demand for higher education.

The current evidence, both quantitative and qualitative, points to a continuing expansion of TNE in the years ahead – in terms of the number of programme offers, the range of TNE collaborations, the number of countries involved, and the number of students enrolled in TNE programmes.

This continuing growth will be driven by a number of factors, particularly the following:

For further insights into TNE growth trends and their relationship to international student mobility, let us look at some of the relevant data from the UK and Australia – two key exporters of TNE services and also leading destination countries for international students.

The number of students studying wholly overseas on a UK higher education award reached 598,925 in 2013.

However the above figures include students who have been enrolled in the Oxford Brookes/ACCA programme, which is a known case of distorted TNE data. The table below presents UK TNE enrolment net of Oxford Brookes. It reflects an 8% growth in enrolment for 2013 over 2012, and average year-over-year growth of more than 12% for the last five years.

Comparing TNE headcounts with inbound EU and non-EU students, it seems that enrolment in UK TNE programmes is increasing while inbound student mobility is in state of stagnation.

Specifically, there is a decline in the absolute number of inbound students from non-EU countries (as the recent Universities UK report has identified) and an increase in the number of TNE students.

Combining data from HESA for both TNE and inbound students, it is clear that TNE enrolment surpassed the number of inbound students from non-EU countries in 2012. This is an important development considering the historically significant portion of non-EU students in international enrolment in the UK. 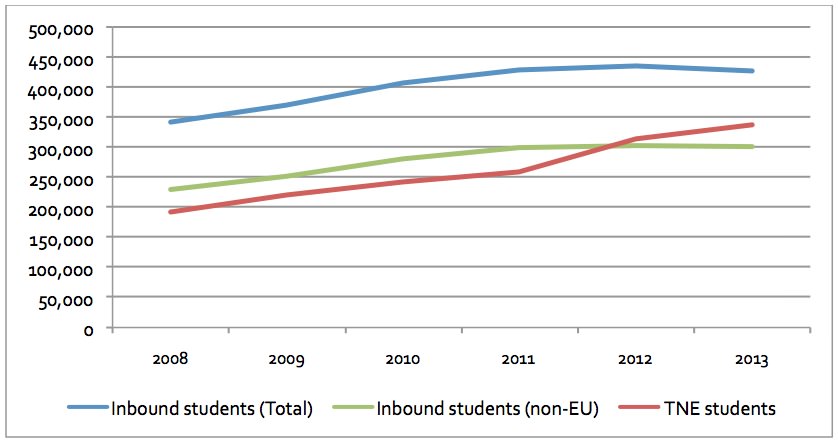 The TNE situation in Australia

As the year-on-year change of the two export modes indicates, Australian TNE has grown at a relatively steady pace while in-country enrolment, albeit a much larger export area by enrolment, has experienced more fluctuation. 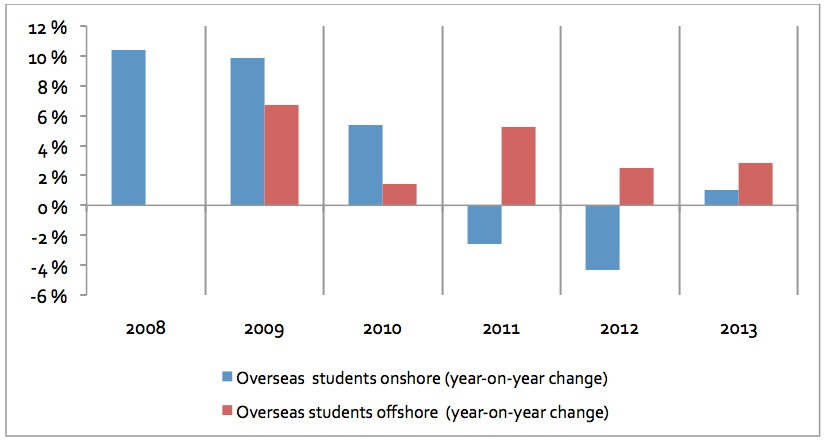 Given the increasing scale of TNE programming in key international education markets, the question naturally arises as to whether there are any substitution effects of TNE on traditional international student mobility. In other words, does greater access to higher education via TNE programmes discourage students from those countries from studying abroad?

A recent OBHE project explored the extent to which any such substitution effects exist in the context of the UK and its four top TNE host countries: Malaysia, Singapore, Hong Kong, and China. The project set out to address the following research questions:

The project relied on quantitative data from HESA and UNESCO, along with qualitative evidence from personal interviews with TNE professionals. Our key findings included: 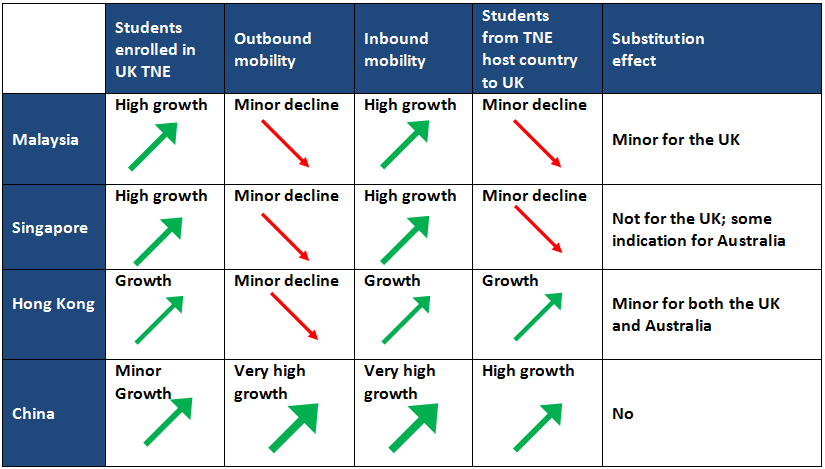 Overall, our research finds that TNE does not act as a direct substitute for outbound student mobility. Rather, it is part of the capacity-building process in TNE host countries. TNE is still a much smaller area of education export in comparison to international student mobility. Further, the minor impact of TNE on outbound mobility to the TNE-exporting country reinforces the argument that the two modes of export are separate and that they attract different types of students.

Dr Vangelis Tsiligiris is an economist who has completed post-graduate studies in management and earned a PhD in TNE. For more than 10 years, he has been engaged in setting up and leading transnational partnerships involving UK and other European universities. His research interests include TNE, student experience, quality management in transnational partnerships, and international strategy in cross-border higher education. He is very active in social media where he leads the Linkedin group Transnational Higher Education. He is currently College Principal at College of Crete and honorary lecturer at University of Liverpool and University Roehampton where he teaches courses in leadership and business strategy in the online MBA programmes.