Number of outbound German students up sharply in recent years

This is impressive growth in absolute terms but it reflects as well a higher degree of international participation among German students. Over roughly the same period, the ratio of German students abroad (compared to those enrolled within Germany) increased from 20 students out of every 1,000 to 64 per 1,000. 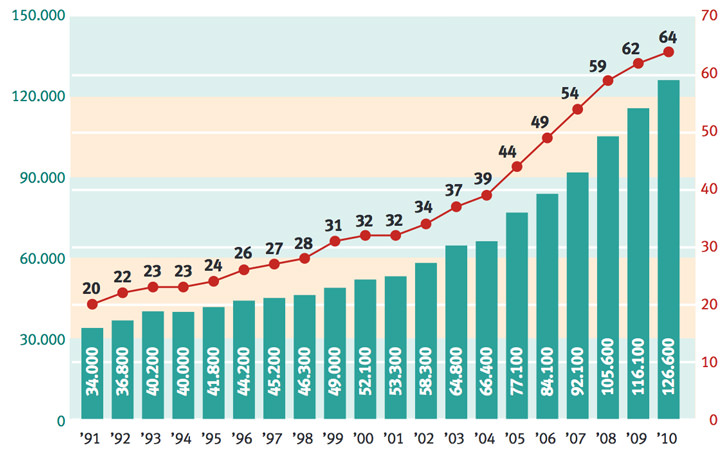 “Increasing international mobility among German students is a key objective of Germany’s higher education policy,” says DAAD’s Facts and figures on the international nature of studies and research in Germany 2013.

“The federal and state governments, together with the DAAD, are aiming to ensure that half of all German graduates gain study-related experience abroad during the course of their studies.”

If the latest figures are any indication, this policy direction has already kicked off a trend toward higher levels of outbound mobility. Germany’s goals in this respect contrast with the Bologna Process objective to have 20% of all students in the European Higher Education Area graduate with some international study experience by 2020.

As the following chart reflects, 80% of German students abroad remain in Western Europe. The major destinations within the region – the Netherlands, the UK, Switzerland, and Austria – collectively account for roughly 63% of German higher education enrolment abroad. 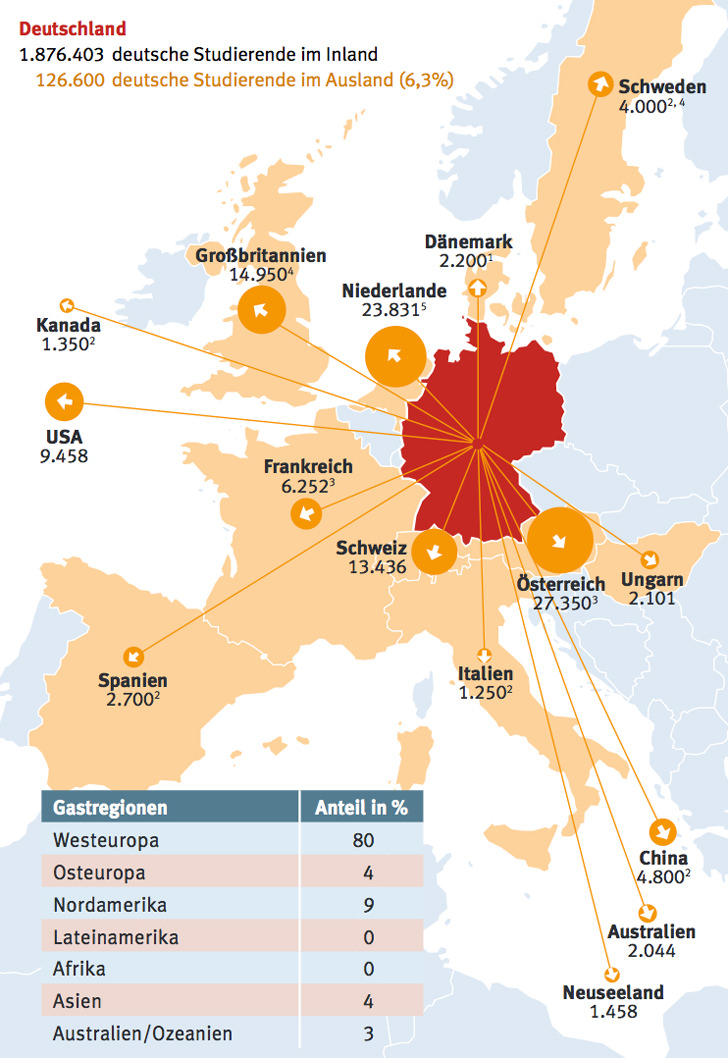 A snapshot of major destinations for German students, 2010. Source: DAAD

In keeping with other important data sources in Europe, DAAD distinguishes between two types of mobility:

The journal International Higher Education highlights a marked rise in longer term stays in recent years and says, “The increase in degree-mobile students from Germany has accelerated sharply during the last years. Between 2005 and 2011, the number of internationally mobile students from Germany rose by 10.6% on annual average. While from 1991 to 2004, the mean growth per year was only half as high (5.3%).”

DAAD adds that there are strong trends with respect to subject areas most in demand among German students pursuing degrees abroad, and that enrolment by subject can vary considerably by host country.

Major subject areas in demand for degree studies include economics (21.5% of enrolment abroad); law and social sciences (18.5%); linguistics, cultural, and sports sciences (14.4%); and mathematics and natural sciences (10.5%). Those four major subject areas account for roughly 65% of Germany’s outbound degree-seeking students. The report says of the balance, “Well below 10% of German students abroad can be found in each of the following subject groups: engineering, human medicine and healthcare, agricultural, forestry and nutritional sciences, arts and art theory, and veterinary medicine.”

Among the major host countries for German students, economics and business programmes account for the lion’s share of enrolment in the Netherlands and the US. In contrast, a majority of German students in Austria study law and social sciences, whereas in France language and culture courses are the most popular choice. 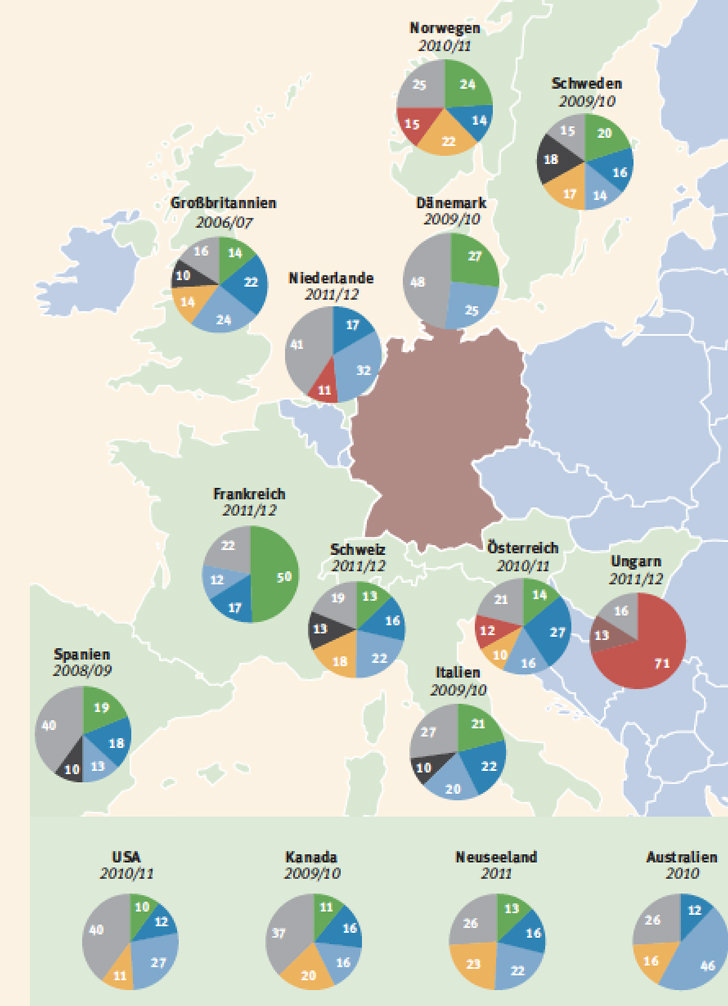 The proportion of German students making short-term study visits abroad grew for about ten years, from 20% in 1991 to 32% in 2000 and has held steady since.

As the following chart reflects, however, the nature of short-term study visits abroad has shifted somewhat in recent years. Studying abroad (“Studium”) remains the main type of visit, accounting for 55% of short-term study travel in 2013. The share of practicum placements (“Praktikum”), while still significant, has fallen over the reporting period.

Meanwhile, excursions and study tours (“Exkursion/Studienreise”) and project work (“Projektarbeit”) have remained more or less steady, while demand for language courses (“Sprachkurs”) has declined slightly over the same period and interest in summer schools (“Sommerschule”) has picked up modestly. 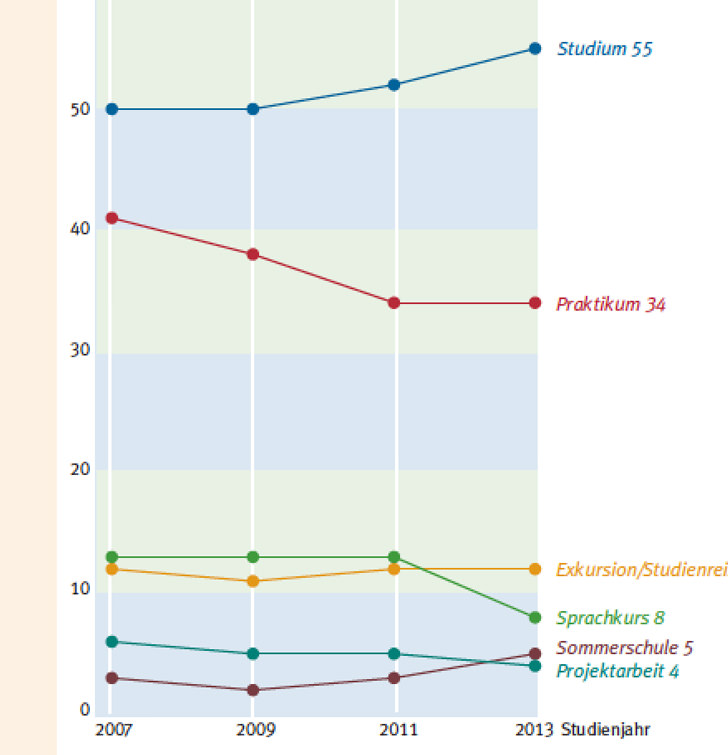 Geographically, short-term study visits by German students are more widely distributed than is the case for foreign degree studies. Only 60% of German students choose a Western European destination for their study visit (compared to 80% for degree studies). In contrast, North America accounted for 14% of short-term visits in 2013, compared to only 9% of degree enrolments.

Looking more closely at the total duration of visits, it is apparent that 75% of students with stays abroad spent a total of three or more months in their host countries. Study visits abroad almost always last at least three months (in 99% of cases), whilst only 60% of international placements do.”

Why or why not?

Respondents to DAAD mobility surveys cite “gaining new experiences, getting to know another culture, coping with a new situation, practicing language skills and improving career prospects” as their primary motivations for studying abroad.

As to what prevents students from either considering or undertaking studies outside of Germany, DAAD adds, “According to the information given by the students surveyed, funding problems are the main impediment to study-related visits abroad. The second most important factor is concern about lost studying time.” (In other words, concerns about reconciling the requirements of a study visit abroad – whether in terms of scheduling, credit transfer, or otherwise – with those of a programme of study in Germany.)

As always, the DAAD report for 2013 provides detailed data on all aspects of inbound and outbound mobility for Germany and is highly recommended as contemporary background and analysis on the German market.

This entry was posted in Europe, Germany, Higher Education, Regions.