The North African nation of Egypt has experienced extreme turbulence in recent years, with mass protest, a coup d’etat, and economic turmoil. With 60% of the population below age 30, it was often students who were in the middle of the unrest, and universities that were the flashpoints. Today’s post takes a closer look at Egypt, its student population, and the state of its education sector.

The Arab Spring that began in Tunisia in 2011 quickly spread to nearby Egypt, with young people comprising an integral element of mass protests that ultimately forced out the 30-year regime of President Hosni Mubarak. Elections led to rise of Mohamed Morsi, but after he enacted a number of unpopular policies the Egyptian military ousted him in June 2013.

A series of interim rulers held Egypt’s reins for the next year. During this period Amnesty International issued a report citing numerous government abuses. The document noted that, “repressive legislation has been introduced, making it easier for the government to silence its critics and crack down on protests,” and went on to point out that, under the banner of fighting terrorism, security forces had failed to distinguish between violent attacks and legitimate non-violent protest.

Many of those protests were student led, and scores of participants were arrested or met with brutal state violence. For example, in a November 2013 incident at Cairo University riot police turned their guns on students and killed 19-year-old Mohamed Reda by shooting him in the back. During the 2013/14 academic year, at least fifteen other students were killed on university campuses, and more than 900 were arrested.

The period of interim rule ended when another national election was eventually held in June 2014. Former head of the Egyptian Armed Forces Abdel Fattah el-Sisi, the leading figure in the coup against Morsi, won the office of president running against a field in which the majority of political parties declined to offer candidates, and many activist groups boycotted the polls.

The new government immediately focused on cleansing universities of political dissent. Minister of Higher Education Dr Al-Sayyed Abdel-Khaleq announced in August that political or partisan activities would not be permitted on college campuses. The decree was denounced by the Arabic Network for Human Rights Information (ANHRI) and other bodies, but hundreds of students are currently imprisoned.

Against this backdrop of unrest, Egypt’s education sector remains one of the region’s largest, with more than 20 million students enrolled, including more than two million at the university level. The country is the second most-popular student destination in the Arab world, after the United Arab Emirates, and a top 20 global destination, according to UNESCO figures.

Fair to say too that the events of the Arab Spring and subsequent instability have unsurprisingly created more intense interest in study abroad opportunities among the local population. Some data tracking this trend comes from World Education Services (WES), which noted a 41% increase in 2012 in applications for programmes in US institutions when compared to the previous year.

Another indicator comes from the Carnegie Endowment, which revealed in November 2013 that 80% of Egyptian students wished to emigrate from the country. The report does not specify a desire for international studies as a specific impetus, however it does cite student distrust of deteriorating and non-democratic state institutions, of which schools and universities are certainly a part.

Oxford Journals also published a poll indicating that 85.7% of Egyptian medical undergraduates at Ain Shams University intended to leave the country after graduation. Most described their reasons as related to research and employment opportunities, but such a high percentage of aspiring leavers among the ranks of future professionals is nonetheless notable.

All of the above data offers strong indications that agents and educational institutions working in Egypt will find a high level of eagerness for study abroad opportunities. And with Egyptian tuition fees at private universities for the 2014/15 academic year increasing anywhere from 50% to 90%, according to a survey by the Egyptian newspaper Youm7, international study is likely to look even more attractive.

Egyptians who travel abroad for university have a strong preference for study in nearby Arab nations, but also show strong migration patterns to the US and Europe. The following chart shows the most popular, recent destinations for tertiary students. 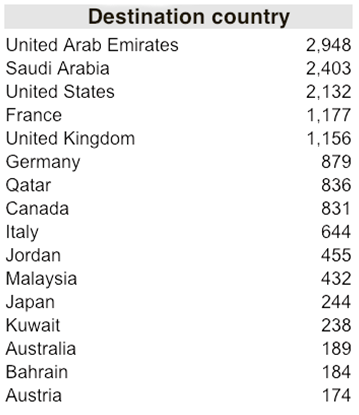 However educators should be aware that while student body interest in overseas study is at a high, government support is not.

Egypt funds only a handful of scholarships, amounting to less than 50 recipients each year. In comparison, Saudi Arabia, at the upper end of the scale in the region, funds more than 30,000 new recipients each year. Financing for all but the wealthiest Egyptian students will be a challenge.

On the inbound side, recent UNESCO figures show the country hosting 49,011 students, placing it 19th among destination countries. Some reasons for the country’s popularity include low living costs, a unique architectural heritage, and well-established universities. In 2012, Cairo was the only African entry in the QS Best Student Cities rankings.

Drilling into mobility data more deeply, however, reveals some downward indicators. For example, US students are choosing Egypt less frequently. The American University in Cairo (AUC), traditionally a popular choice, has experienced a 96% drop in foreign enrolment. And one Cairo-based language school, Kalimat, has reportedly seen its revenue drop by as much as 85%.

It’s also safe to assume, though exact data is scarce, that the many evacuations of foreign students since the beginning of Egypt’s unrest has driven inbound mobility numbers further down. Thousands of students left in 2011, and in 2013 the Malaysian government issued a return order at a time when 7,850 of its students were home for their semester break. Indonesia, the Philippines, and Thailand also issued repatriation orders.

The future of Egyptian education

There are 22 public universities in Egypt, including the oldest continuously operating institution in the world, Al-Azhar University, and the largest medical institution in Africa, Ain Shams University. In addition, there are 21 private universities and hundreds of higher education institutes and technical colleges.

While the education sector is respected throughout the region, there has been a growing consensus among observers in recent years that reform is needed at every level. In August 2014 President el-Sisi announced a US$5.87 billion higher education plan aimed at increasing the number of market-ready graduates and promoting a knowledge-based economy. Known as the Plan for Higher Education and slated to run in two phases through 2022, some of its goals include:

Successful reform could ultimately begin to relieve high unemployment, low rates of return on education, and increasing informality in the labour market. With only 10% of workers employed in the modern formal sector, and an average of seven years needed to complete the transition from school to work, the Egyptian labour market is in search of dramatic improvement.

Egypt’s education sector is driven mainly by supply – that is, by the relatively large base of established universities – rather than demand. Among the key problems this has created are low productivity, low international competitiveness, and a severe skills shortage. These are some of the reasons vocational training has been singled out for placement at the top of the reform agenda. The Minister of Education Mahmoud Abo El-Nasr recently announced that the government is in the process of establishing a Ministry for Technical Education and Vocational Training. The new administrative body will oversee the schooling of an estimated 2.5 million students.

The government says it will fund its many plans via constitutional entitlement, citing the 2014 national charter which requires that 4% of the national budget go toward education, 2% toward higher education, and 1% toward scientific research. But with a budget deficit above 13%, questions have arisen concerning how fully the government’s plans can be financed.

Recent increases in foreign aid may provide some relief in this respect. Saudi Arabia, UAE, and Kuwait have committed around US$20 billion through a mix of central bank deposits, grants, and project aid. These funds have been used to stabilise the economy and to partially meet energy and food needs, but the influx is a sign that the government may be able to secure backing for other programmes.

The Egyptian government’s ambitious plans to expand and improve the higher education system will no doubt bear on the demand for study abroad in the years ahead. For the moment, the available data, and more recent anecdotal reports and surveys, all point to growing interest in international study and improved prospects for the recruitment of Egyptian students.

At the same time, foreign providers have begun to play more of a role in strengthening Egypt’s domestic system. The United States Agency for International Development (USAID) has provided multi-year funding to advance STEM training, and more recently Egypt and South Korea have reached an agreement to establish a Korean university in Egypt, with an initial focus on engineering, information technology, and professional training.

“With multinational corporations expanding their operations within Egypt – and more and more Egyptian companies becoming regionally and even globally competitive – the need has never been greater for highly skilled labour, including technicians, engineers and fluent foreign-language speakers,” says the report. “English is increasingly the business language of Egypt and is a core skill in the large tourism sector. This is a competitive market with many existing suppliers, but demand will continue to grow.”