The agent question: New data has the answer

In international education circles, the use of education agents is simultaneously controversial, and widespread. But, as a new report published today by The Observatory on Borderless Higher Education (OBHE), The agent question: insights from students, universities and agents, notes, the debate has been flawed so far by “dependence on anecdote over data.” Everyone has an opinion, but based on what? Personal experience and/or preconceived notions do not, on their own, speak of overall trends or practices in a global marketplace.

The report draws on three streams of data in an effort to “make the agent debate less rhetorical and more evidence-based,” and concerns itself with answering three main groups of questions:

To answer these questions, the OBHE compiled data from students, institutions, and agents themselves. For agents, they drew on Agent Barometer data, the i-graduate/ICEF-founded survey of education agents around the world. For students, they turned to the i-graduate’s International Student Barometer (ISB), the world’s largest survey of international student satisfaction, which includes a section on students’ use of, and satisfaction with, agents. For institutions, OBHE undertook a survey of institutional use of agents across seven countries.

Systems in place to identify the best agents

Across the world, there is no one common agent regulation system, but The agent question outlines the main ways the major destination markets of the US, Canada, the UK, Australia, and New Zealand provide agent training as well as established processes for qualifying agents. After providing details on each market, the report provides this general assessment:

“Regulation of education agents is diverse … and very much evolving. The well-established voluntary arrangements in Australia and New Zealand steer prospective students and institutions to a list of ‘registered’ agents. The British Council’s regime plays a similar role. Canada’s immigration-focused system will similarly distinguish agents ‘serious’ about Canada, and certainly offers very practical advantage to agents themselves in terms of the ability of offer visa advice within the law.”

The report notes that limitations so far to the overall regulatory environment include distinct national and international regulation systems as well as few regulatory systems in the sending countries out of which local agents operate. It suggests:

“More robust local regulation, in the countries where agents are based, may also permit greater partnership between host and destination countries.”

To report on the size, services, and performance of agents across the world, The agent question looked at 2013 data from the i-graduate/ICEF Agent Barometer, which surveys agents working with institutions in secondary and higher education, and also language and vocational schools. The sample used by OBHE included 1,194 agent responses across 117 countries.

As much as the sample is analysed according to nationality, there is one notable limitation. Despite China being the largest market for international students and the heavy use of agents among Chinese students, agents located in China represented only 2.5% of the 2013 sample. The report notes, “The China-based agents in the sample were larger than average in terms of staff and placement volume, countering but far from eradicating under-representation.”

Here are some of the highlights from this section of the report: 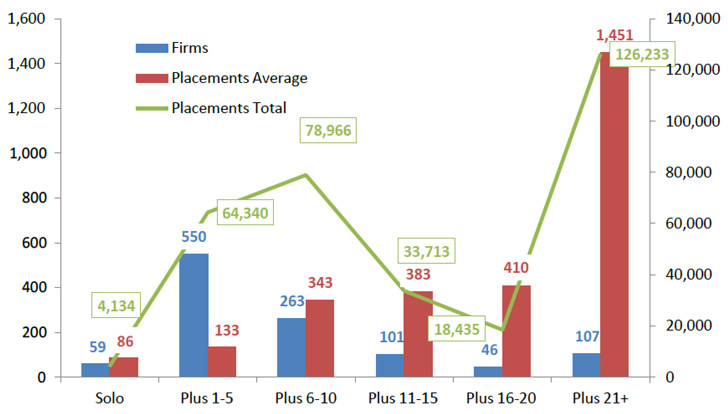 Distribution of student placements by size of agency. Source: OBHE

“The current situation might be judged a healthy compromise between agents and higher education institutions. To hit recruitment targets, institutions typically desire geographical breadth and operational sophistication of agents, both of which require or favour scale. But an agent may need multiple clients in order to support that scale. Institutions trade single agent performance for breadth and skill of operation, and rely on multiple agent relationships; while agents give up close fit with a few clients for a workable fit with many.”

What do institutions say? 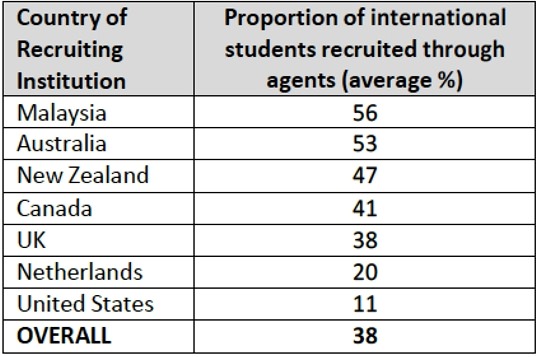 The i-graduate International Student Barometer (ISB) is the world’s largest survey of international student satisfaction. It asks first-year students whether they used an education agent before enrolling and gathers feedback on the experience of those who did.

The OBHE examined “mainly a subset of ISB data covering 48 comprehensive universities in Australia, the UK and the United States, representing about 27,000 first-year international students.”

Here are the highlights: 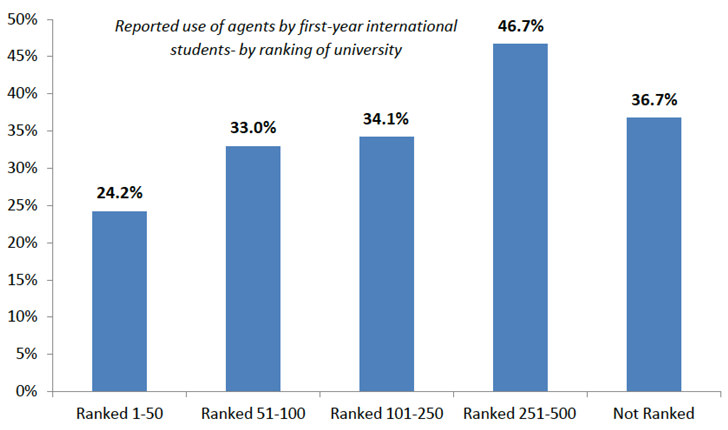 Reported use of agents by first-year international students, by ranking in the Academic Ranking of World Universities. Source: OBHE

What the findings suggest

The agent question concludes by rejecting any notion that there is an intrinsic problem with the practice of using agents – and it does so on the basis of the data analysed for the report. It acknowledges that bad practice among agents certainly exists, as it does among actors in any industry. But on the whole:

The report goes on to back up that contention with more data. While we have space to report only the summary findings here, we encourage you to visit the i-graduate website to request an abstract or purchase the complete report. For now, we will leave off with its final paragraph regarding thoughts about the healthy maturation of an industry in which agent use continues to grow:

“If done well, evolving regulation, in host and destination countries, will help accentuate the benefits of agents and minimise scope for bad practice. The industry needs to step fully into the light. As the industry adage goes, sunshine is the best disinfectant.

Industry consolidation will also play a positive role. Just as important, data on agent use, performance, and views… is essential in transforming the agent debate from rhetorical to evidence-based.

The task at hand is not to blindly endorse or reject agents but to acknowledge the validity of the role; and for those students, institutions and governments who choose to engage with agents, to continue to seek ways to optimise the legitimate benefits for all concerned.”