Mapping the geography of international students in the US

A new study by the Brookings Institute, The geography of foreign students in US higher education, goes beyond collecting data on international students in America to offer fascinating insights on:

In this article we’ll explore some of the most important findings from this interesting new take on US student data.

A quick note on the methodology of the report: the primary data source was US Immigration and Customs Enforcement I-20 forms from 2001–2012, in particular the Student and Exchange Visitor Information System (SEVIS) data submitted by US schools with foreign students enrolled under F-1 visas. The Brookings Institute then filtered the sample to include only:

The main point for the purposes of this article is that the Brookings report and the overall SEVIS data show notable growth in international student numbers in the US. According to the Brookings methodology:

The report notes that the biggest increases come from sending countries considered “emerging markets,” such as China and Saudi Arabia.

Why the focus on metropolitan centres and sending cities is interesting

The Brookings Institute notes the following areas of potential impact:

Those American cities with significant numbers of international students are the best placed to enjoy such benefits – particularly when the cities also contain exciting work opportunities for foreign graduates. A key consideration here is the limited extent (currently) to which US immigration laws allow talented international students to remain in the country to work post-graduation.

The Brookings Institute found that from 2008 to 2012, “85% of foreign students pursuing a bachelor’s degree or above attended colleges and universities in 118 metro areas that collectively accounted for 73% of US higher education students.”

Some metropolitan areas command very significant proportions of that 85%:

The report lists the metropolitan areas experiencing the fastest increases in international students between 2008 and 2012, all of which are “small to mid-sized” in terms of population, and all of which boast a public university. None of them are in California or New York – visit the report’s summary page to find out what they are.

The cities sending the most students to the US

The top ten cities from which F-1 students studying bachelor’s, master’s, or doctoral degrees in the 118 metro areas in the Brookings sample are:

Source: The geography of foreign students in US higher education, by the Brookings Institute

Brookings notes that most foreign students from the 94 cities responsible for sending at least 1,500 students to the US “have ties to potentially large consumer and investment markets.”

Furthermore, Brookings reports that of the five foreign cities seeing the most growth in the numbers of their students pursuing bachelor’s, master’s and doctoral degrees, four were in Saudi Arabia. Jeddah saw a 360% increase from 2008 to 2012, Dammam a 302% increase, Riyadh a 279% jump, and growth of 264% in Qatif. In fifth place was Ningbo, China, with a 252% increase from 2008 to 2012. Needless to say, notes Brookings, the King Abdullah Scholarship Programme is a huge factor in the Saudi Arabian growth. 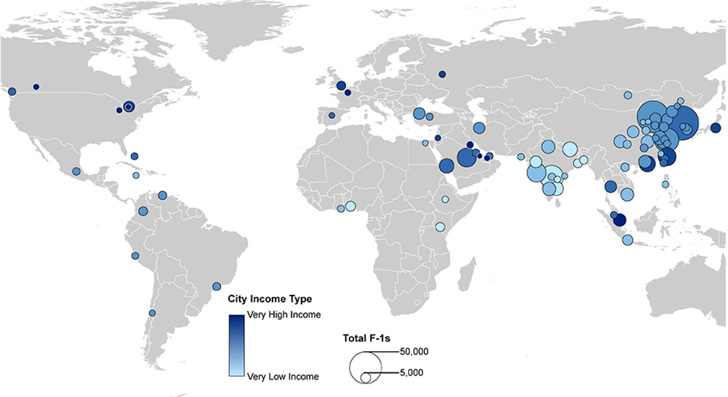 Global hometowns of foreign students in US, 2008–2012. Source: Brookings Institute

The report goes on to list the most popular American institutions for each major sending city, as well as:

Staying to work after graduation

The Optional Practical Training (OPT) programme, which allows international students on F-1 visas to apply to work between 12 to 29 months post-graduation, is well used: Brookings estimates that about one in three F-1 graduates ends up working in the US under the OPT programme. From the report:

The bigger the metro area and the more relevant industry work there is for an international graduate, the more likely the international student will make use of OPT in that area.

So much to build on

The report goes on to discuss the limitations of current US immigration policy in encouraging the retention of talented international students (i.e., allowing them to achieve permanent residency). It also provides valuable advice regarding the best ways for metropolitan areas to leverage international students while they are here – in other words, to consider them properly as key players and innovators in global knowledge and economic markets. For example:

“Metropolitan leaders wanting to retain US-trained foreigners should help educate local employers on how to obtain the necessary visas through the current US immigration system. As already proposed by Congress, the federal government can also make changes in the F-1 visa programme to allow foreign students from high-quality schools to apply directly for permanent residency if an employer is hiring them. State and metropolitan leaders should engage with their local higher educational institutions to utilize foreign students’ knowledge and connections with markets abroad to benefit local businesses. These reforms can help metropolitan economies grow in more productive, inclusive and sustainable ways.”

All in all, it is a fascinating and in-depth report and we highly recommend reading it in its entirety.