Bordered by Russia to the north, and China everywhere else, Mongolia is a landlocked country nearly twice the size of Eastern Europe. With a population estimated at just over three million, Mongolia is the least populous nation in the world. About half of its people, however, are based in the capital of Ulaanbaatar.

Mongolia is increasingly on the radar for international recruiters as an emerging market in the region, fueled both by strong economic growth and by the aspirations of its people. Today ICEF Monitor takes a closer look at Mongolia, its history, its future, and its education market. 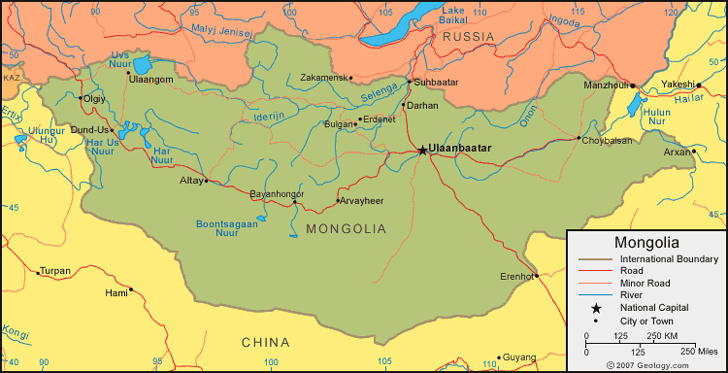 The country came under Soviet influence and was effectively established as a Soviet satellite state in 1924. Following the collapse of the Soviet Union, Mongolia reconstituted itself under a democratic, multi-party system in the early 1990s and began a transition to a market economy.

And what a transition it has been: Mongolia has possessed one of the fastest-growing economies in the world in recent years, thanks mainly to its burgeoning mining sector. But earlier forecasts that the country’s GDP growth would reach 15% in 2014 have not materialised. First-half growth for the year is way off that earlier projection, and growth has unquestionably slowed in 2014.

However, even the previous years of high growth and an estimated mineral wealth of up to US$1.3 trillion never translated into economic gains for the entire population. The World Bank estimates that about 25% of Mongolians live under the poverty line. Thanks to government investment, access to education has improved in the last two decades, and policymakers hope wider access will eventually relieve poverty.

High demand for education but low levels of spending

During its years under Soviet influence, the schooling from primary level through university was free for all students in Mongolia. The dissolution of the Soviet Union meant financial support for education disappeared, sending education systems into a steep decline that bottomed out in the early 1990s.

In 1994, the average length of time spent in school by Mongolian students was 7.7 years, but by 2010 that span had increased to 14.3 years. During roughly the same period, the number of students going on to tertiary education increased by six times. Development Progress, a UK-based research group, reports, “Almost three in five Mongolian youths now enroll in university – a rate comparable to the average for high-income countries.” These shifts saw Mongolia improve from the lowest school life expectancy in Central Asia to second, just behind Kazakhstan. 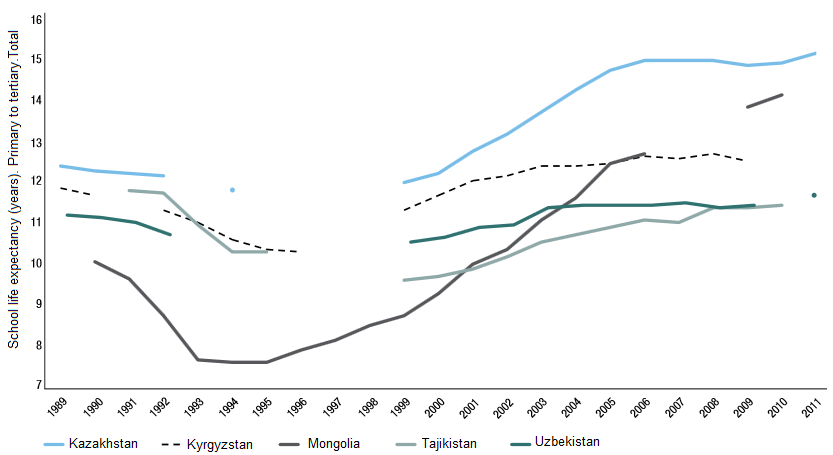 Disparities in access to secondary education between urban areas and less prosperous rural areas have diminished over the past decade, and tertiary enrolment rates for women reached a level almost 10% higher than those for men. In fact, female participation in tertiary education is now greater than the average for OECD countries.

Mongolians value education highly and demand for secondary and post-secondary education in the country is strong. But while overall school enrolment rates are high, per-student public expenditure on tertiary education is about US$339, in contrast to an average of US$11,512 per student in OECD countries. Low levels of public spending on education has led to an expansion of private-sector higher education institutions and, the World Bank reports, the “mass admission of fee-paying students for financial sustainability.”

These low levels of spending are reflected in staff qualifications and corresponding levels of research activity, as well as a lack of resources to attract highly qualified instructors or to upgrade teaching and learning facilities. “Only 23% of faculty members in public institutions and 15% in private institutions have PhDs, reflecting the non-research nature of higher education,” says the World Bank. A full professor in a public university may make as little as US$300 a month. Instructors at private institutions often make more, but not substantially so.

Despite these challenges, the Mongolian government says it is committed to achieving the UN Millennium Development Goals (MDGs) by 2015. One ongoing programme designed to help this happen is the Rural Education and Development (READ) Project, launched in 2006. The project’s goal is to improve learning conditions for rural students by increasing the amount of books, computers, and qualified teachers.

The country’s communication systems are expanding too. The government has tackled problems caused by inadequate infrastructure, with the result that by 2013, mobile services were reaching 2.5 million subscribers at a 92% penetration rate. These days most Mongolian youth use social media websites such as Facebook and Twitter, and mobile phone usage is growing, even in rural areas.

Students entering the Mongolian tertiary sector have a choice of 178 colleges, universities, and teacher training colleges, of which 42 are public. These schools are administered by the Ministry of Education, Culture, and Science, which sets policy and oversees standards.

As of 2013/14, Mongolian colleges and universities enrolled a total of 174,075 students, the vast majority of which were studying in the capital city of Ulaanbaatar. In total, 18,063 of those students were in Masters programmes, while 3,304 were working toward PhDs. Technical and vocational schools, conversely, have seen student numbers decline recently with a combined enrolment of 42,800 in 2013/14, down from 45,200 during 2010/11.

While university enrolments are high, the country’s higher education graduates are not sufficiently competitive in international markets. The number of graduates surpasses the available employment opportunities, and because demand for skills in the mining-dominated economy is not matched by supply, graduates of Mongolian universities face difficulties finding employment. A World Bank study from 2010 showed that only a third of university graduates found jobs, compared with two thirds of technical and vocational graduates.

The Mongolian government is aware of such problems, though, and has announced plans to realign its education system toward the country’s market economy. Minister of Education and Science Luvsannyam Gantumur told the European Times earlier this year that the government wishes to “partner with local and international companies concerning creating internships for our students to allow them to gain practical experience in different fields.”

The Minister added, “We want to foster a new generation of Mongolian youth who make the most of their individual talents and get involved in research, business and other activities which will support the country’s on-going development. We believe that foreign companies in Mongolia can play an important role in this effort.”

There are indeed indications that foreign influence on Mongolian education has increased during Minister Gantumur’s watch. In October 2013, for example, a model classroom incorporating Japanese-style technical education opened at the Institute of Engineering and Technology in Ulaanbaatar, using curriculum from Tomakomai National College of Technology in Hokkaido, and hosting two Japanese professors from the Tokyo Metropolitan College of Industrial Technology.

Another example of Mongolia’s international outreach is the Mongolia-Germany Institute of Technology, established in 2012 through a memorandum of understanding with the German Agency for International Cooperation (GIZ).

Such agreements may increase, as Minister Gantumur has said that the government seeks international partnerships in the education sector, but at the moment only about 500 Mongolians study in foreign-affiliated universities or colleges.

English language proficiency among Mongolian students is growing, and the number of students who are both financially and academically capable of studying abroad is projected to increase in coming years. As in the higher education sector, there has been an expansion of private-sector language schools in Mongolia in recent years. However, the level of training available does not match up well with industry requirements.

The major subject areas in demand within Mongolia, as estimated by the Economic Research Institute (ERI) and the National University of Mongolia, are:

In other words, the vast majority of Mongolian higher education students are interested in studying business.

Interestingly, Education USA reports that in terms of Mongolian students in the US, “Top fields of study include engineering, technology, natural sciences, teaching and agriculture. The Mongolian government has indicated an interest in providing financial support for study in these areas.”

UNESCO estimates that there were just under 10,000 Mongolian students enrolled in higher education abroad in 2012. Leading destinations include South Korea, Russia, the US, Japan, and Turkey.

The Mongolian government offers two scholarship programmes for studies abroad, both of which rely heavily on the Times Higher Education (THE) University Ranking. The Presidential Scholarship programme for undergraduate students provides for full tuition and living expenses for students accepted to top 20 ranked institutions in the THE tables, regardless of specialisation. Students accepted to the top 21-100 THE-ranked institutions, meanwhile, may also receive financial support under the programme for studies in areas identified as priorities by the Mongolian government. Education USA indicates that current priority areas include environmental sciences, physics, mathematics and chemistry.

With 21% of the population aged 15 to 24 years, almost universal literacy, high enrolment in tertiary education, and growing access to communication technology, Mongolia’s international education market appears poised for growth in the years ahead. But government policy and national economics will have to continue to combine in a positive way for that growth to be sustained.