“I am convinced that Dutch education should train ‘competent rebels’: pioneering thinkers and doers who are able to promote change through a combination of creativity, courage and ambition,” said Dutch Minister of Education, Culture, and Science Jet Bussemaker in a special presentation to parliament last month.

“In my view, internationalisation is crucial for the acquisition of knowledge, skills and professional competencies… [and] extremely valuable in terms of contributing to the students’ personal development and identity.”

With those remarks, Dr Bussemaker introduced a new vision for international education in the Netherlands. Focused on higher education as well as Vocational Education and Training (VET), her vision is sweeping in scope and represents an ambitious statement as to the role of internationalisation in shaping Dutch education – and by extension the country’s society and economy – along with a clear action plan for the years ahead.

The strategy aims to expand student mobility, both inbound and outbound, and to enable a wider field of transnational education initiatives and international partnerships for Dutch institutions.

The Minister also announced the establishment of a €5 million-per-year scholarship programme that will be primarily targeted to non-EU students coming to the Netherlands, but also available to support study abroad for Dutch students.

“Over the next ten years, the programme will enable approximately 10,000 top-class students to study abroad. Half the costs of the scholarships for inbound students – and possibly also for outbound students – will be borne by the institutions,” said Dr Bussemaker. “I will inform the House about further details of this scholarship programme in the beginning of 2015.”

The number of foreign students studying in the Netherlands grew by 61% between 2005 and 2012, numbering just under 70,000 in 2011/12. The majority of students are from the EU, which also accounts for much of the growth in inbound mobility over those several years.

“Germany remains the main country of origin for international students,” says a Nuffic report. “The number of German enrolments is followed at some distance by enrolments from China and Belgium, which in turn are still well ahead of the growing numbers of students from Bulgaria, Greece, the United Kingdom, Italy and France. The continued growth in student numbers from the latter countries appears to be offsetting the diminishing growth in student numbers from Germany.” 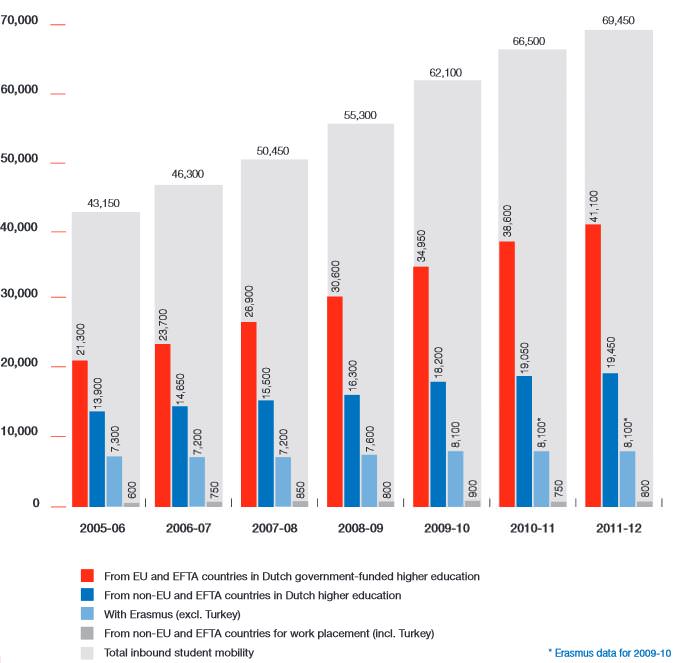 Nuffic, the peak body for international education in Dutch higher education, maintains a network of Netherlands Education Support Offices (NESO) in nine strategic growth markets around the world: Brazil, China, India, Indonesia, Mexico, Russia, South Korea, Thailand and Vietnam. They note that the number of inbound students from NESO target countries has grown more than four-fold in recent years, from 2,500 students in 2007 to 10,500 in 2012.

Dr Bussemaker, meanwhile, is clear that the Netherlands aims to encourage a larger proportion of inbound students to stay after graduation. “Attracting and retaining talented international students is of huge importance to the Dutch knowledge economy,” she said.

“It appears that as many as 70% of students would like to stay in the Netherlands, while only an estimated 27% actually do so… Statistics Netherlands has calculated that inbound mobility can have a net positive effect of approximately €740 million. In other words, retaining international talent in the Netherlands strengthens Dutch education and the Dutch knowledge economy alike.”

The Minister’s statement also reinforces a national commitment to an action plan – “Make it in the Netherlands!” – produced by the Dutch higher education community. That plan calls for an expansion of Dutch language training, the development of new career planning resources for foreign students, and the easing of legislative obstacles that will open new work and migration opportunities for foreign graduates.

The timing of these announcements coincides with reports that the Dutch economy is stabilising, boosting demand for multilingual professionals across a variety of sectors.

“My aim is to improve the balance between inbound and outbound mobility,” said Dr Bussemaker. “According to the Research Centre for Education and the Labour Market (ROA), the international and intercultural skills that students acquire during their studies are becoming ever more important as an indicator of success on the labour market. Many employers already apply international experience as a standard criterion; graduates without such experience are the exception rather than the rule. In addition to broadening their international orientation, experience gained abroad will also promote a student’s development in a variety of other fields.”

There is some work to be done to achieve that inbound-outbound balance. While more Dutch students are studying abroad now than was the case a decade ago, they still only numbered just over 25,000 in 2008/09, or roughly a third of the inbound volume for 2012. 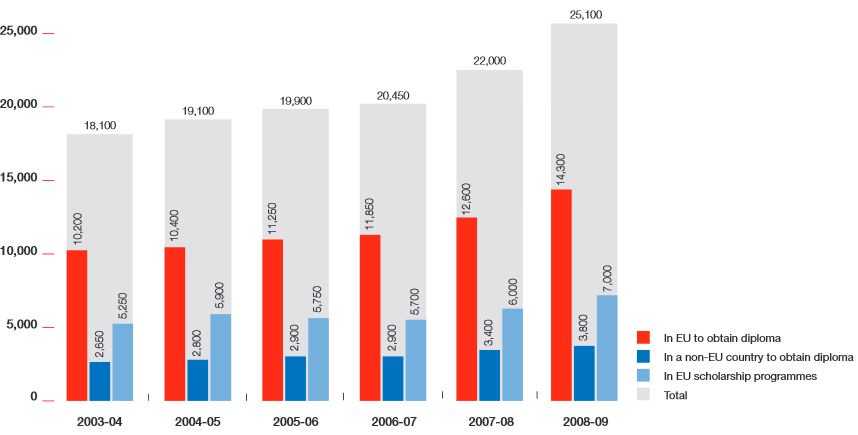 The Minister intends that increased efforts to internationalise Dutch curricula and campuses, as well as expanded financial support for study abroad, will help drive these outbound numbers up in the years ahead.

Dr Bussemaker adds, “The world has changed over the past decades, not just for academics but also for craftsmen and women. Businesses are becoming ever more international in their orientation and demand other competencies from skilled workers, as they do from academics, compared with one or two decades ago…VET students, like all others, will have to be prepared for a dynamic labour market which is no longer confined to the Netherlands.”

In recognition of these growing labour market demands, Dr Bussemaker has committed €4.5 million to expanded mobility and international partnership programmes for the VET sector, with the goal of expanding outbound mobility of Dutch vocational students and of optimising their participation in an expanded Erasmus+ programme beginning in 2014.

In a related development, Nuffic and the European Platform, the Dutch peak body for internationalisation in primary and secondary schools, will merge and will receive an additional €500,000 subsidy to support the expansion and adaptation of their services, such as the NESO network, for the VET sector.

“This marks the beginning of a new phase in Dutch educational policy,” concluded Dr Bussemaker – one of “mainstreaming internationalisation.” The Minister will announce further details on key action items, including the scholarship programme, through the balance of this year and into 2015.

This entry was posted in Europe, Higher Education, Most Popular, Netherlands, Regions, Vocational.