The 2014 Academic Ranking of World Universities (ARWU) – compiled by Shanghai Jiao Tong University (SJTU) and colloquially known as the “Shanghai ranking” – was released earlier this month with Asian universities, particularly those from China, gaining ground in this year’s list of the world’s top 500 universities.

However, American universities continued their dominance in the Shanghai tables, taking 16 of the top 20 spots, 52 of the top 100, and accounting for 146 of the 500 institutions listed overall. Harvard was named the top university for the 12th year in a row, with Stanford University, Massachusetts Institute of Technology (MIT), University of California, Berkeley, and the UK’s University of Cambridge rounding out the top five. 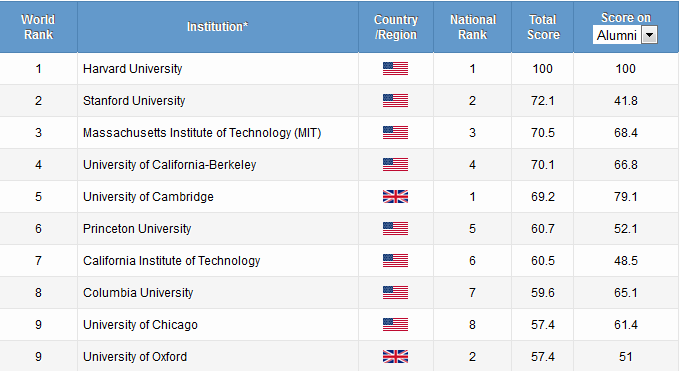 The top 10 institutions in the 2014 Shanghai rankings. Source: ARWU

A closer look at the tables demonstrates the growing strength of Asian universities, in particular universities in China. Chinese institutions vaulted up the rankings and now occupy 44 of the top 500 spots (with 32 based in Mainland China), although only nine managed to rank in the top 200, with Peking University, Tsinghua, and Shanghai Jiao Tong all placing in the 101-150 bracket.

The top-ranked universities from Asia were both Japanese, with the University of Tokyo at number 21 and Kyoto University at 26. Japan was the only nation from East and Southeast Asia to place in the top 100. Singapore’s two leading universities, National University of Singapore (NUS) and Nanyang Technological University (NTU) also both showed strong gains.

Brazil fared relatively well, with six universities in the top 500, although none reached the top 100. South Africa and Egypt were the only countries in Africa to break the top 500, with Cape Town, University of the Witwatersrand, KwaZulu-Natal, and Stellenbosch University from South Africa joining the University of Cairo in Egypt among this year’s top-500 institutions.

The reaction to the annual Shanghai rankings – both at a national and an institutional level – is often as interesting as the tables themselves. In the United Kingdom, for example, there was concern in the wake of this year’s ARWU that the country might not be investing sufficiently in higher education, especially compared to other countries.

In a statement to Times Higher Education, Wendy Piatt, director of the Russell Group, said:

“The continued success of the UK’s leading universities, as highlighted by these rankings, will require increased investment and less regulation from government in the coming years. Other countries are pumping billions into higher education and research, particularly into their best universities – something now reflected by the rapid rise of these universities in worldwide rankings. The UK’s spending is far behind that of other Western European nations, China and the USA – our public expenditure of 0.7% of GDP on higher education is on a par with Chile and Slovakia.”

Reports in India, meanwhile, lamented the country’s showing in this year’s rankings. The Hindustan Times expressed disappointment that only one Indian university placed in the top 500 (Bangalore’s Indian Institute of Science at 327).

The article quoted Dr Ying Cheng, executive director of the Centre for World-Class Universities (CWCU) at Shanghai Jiao Tong. Dr Cheng emphasised that the number of Asian universities in the top 20 had grown by 20% over the past ten years (compared to a decline of 10% in American universities). However, he added, Asian universities need to do more. “The challenge they face includes language, funding, and also the culture.”

What about the methodology?

As we observed recently, the release of any ranking table is bound to generate discussion, particularly around questions of methodology. Our earlier report quoted Connell Monette, Assistant Vice President for Academic Affairs at Al Akhawayn University in Morocco, who noted that rankings can be an effective measure of quality but that understanding the methodology behind the ranking table is critical.

“What matters more is the metrics which are used in the ranking system. For the African continent, or for North Africa and the Mediterranean, the success of a university might legitimately be considered along different parameters than American or Asian or European institutions. African institutions might be measured in how they contribute to development in the local, regional and national levels: Are their graduates getting jobs, are they contributing to the development of local industries or agriculture?”

It is fair to say that given the number of university ranking systems that currently exist – a figure only set to grow in the years ahead – interpreting the wide-ranging results (and the qualities and characteristics that they reflect) can be a challenge.

While many feel the Shanghai list provides one of the more objective ranking systems, as it uses only publicly available data and does not incorporate reputational factors, critics feel the system still maintains a bias toward certain types of institutions, due in part to its heavy reliance on science-oriented ranking factors.

For example, while French universities held their place in this year’s rankings (with four of the top 100 spots), Radio France Internationale (RFI) reports on the dissatisfaction among some in France with the ARWU methodology and quotes French Minister of Higher Education and Research Geneviève Fioraso: “What we know is that this ranking was made for the Anglo-Saxon system. Why? Because it measures research performance, divided by the number of students. But in the United States and in the United Kingdom, research universities are rather small and very selective.”

The same report from RFI notes that the Shanghai rankings have been criticised in the past for not taking into account the “quality of education” or “employability of students.” France, it says, has recently announced it is working on its own system of ranking universities.

A report in The Local reflects a similar view from Austria in noting, “Instead of seven there were only six Austrian universities listed among the 500 best universities… However, the rankings are sharply criticised, especially in Europe, where experts believe the criteria are biased against European universities.”

The Shanghai rankings are compiled on the basis of six measures:

In total, more than 1,200 universities are measured via the ARWU factors each year with the top 500 resulting scores published online in the annual Shanghai tables.