An ambitious new study aims to explore the direct cost-benefit relationships of international students as they pertain to host institutions and host countries.

The study, The financial impact of cross-border student mobility on the economy of the host country, by the German Academic Exchange Service (DAAD), reveals that the tuition, immigration, and taxation policies of the host country are huge factors affecting the economic benefits created by international students.

Perhaps most interestingly, the German research highlights how important retaining international students post-graduation can be to the host country economy.

The study examines Germany, the Netherlands, Austria, Poland, Switzerland and Spain, and “employs a model for calculating the short-and long-term financial and economic effects of international student mobility developed on the basis of an analysis of the available national and international literature.”

Some of its most interesting features include: 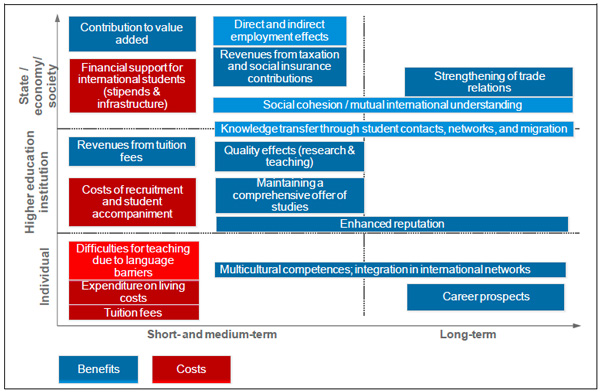 An overview of the cost and benefit effects of cross-border student mobility. Source: Prognos AG 2013

As the figure above suggests, the study is largely focused on sorting out direct, measurable economic impacts. A related commentary from ScienceGuide is careful to highlight that, “On top of these economics effects, there are other effects that are harder to express in economic terms. Increased student mobility boosts cross-border knowledge, benefitting both countries. Student also acquire multicultural competences which on the level of the individual are valuable for future careers, and on the societal level contribute towards understanding and breaking down prejudices between peoples. Moreover, cross-border student mobility facilitates the formation of international networks, which can in the long term lead to intensified economic relations among participating countries, the researchers state.”

The study notes that of the participating countries, Switzerland has the highest cost of living and that as a result, “the macro-economic effects on value creation and employment depend on the amounts international students have to spend to cover their living expenses.” The study adds:

“In Switzerland, due to the high living costs there, students spend around €19,500 per year. The cost of living is lowest in Poland, where student expenditure amounts to €4,800. In the other researched countries, the money students spend on accommodation and consumption ranges from €9,000 in Spain to €11,400 in the Netherlands.”

The tax on income that international student graduates pay in a host country when they stay to work there also contributes to the country’s economic benefits. Again, these differ widely: “In countries like Germany and Austria with relatively high average levels of income tax, the annual effect per head at around €22,700 and €25,000 respectively is correspondingly higher than in the other countries researched [for example, Poland came in at just €3,800 per head].”

When the state pays for most of what it takes to accommodate international students (as opposed, for example, to an institution’s charging differential tuition for international students to offset the cost of supporting them), this falls into the category of a cost, rather than a benefit. Consider the different costs incurred by Spain, for example, compared to the other countries:

“State expenditure per place of study varies between €2,900 in Poland and €22,500 in Switzerland. At around €11,900, Germany is mid-field. Austria and the Netherlands, at €11,200 and €10,500 respectively, have similarly high state expenditure. In Spain the state expenditure on higher education funding is lower, at around €8,000.”

Benefits end up outweighing costs … but it can take time

Cost of living, taxation policies, and tuition policies are just some of the factors revealed by the study to influence the relationship between the costs and benefits of international students in different countries. The interplay between costs and benefits – and how much the latter win out over time – is complex and the study uses a variety of calculations to analyse them. But overall, the main points arising from the research are that:

“The annual level of long-term returns depends entirely on the number of international students who, once they have graduated, choose to remain in a host country and pursue gainful employment.”

This is because of the creation of jobs and new spending, as well as revenues from taxation, that international graduates generate by remaining in the country to work. 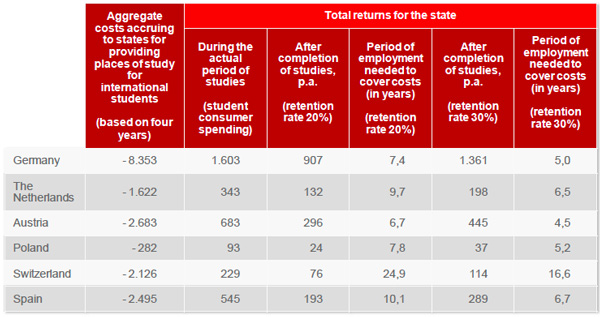 Netting out the aggregate costs and returns of state funding in the event that 20% or 30% of international students remain in a host country, in million euros and years. Source: Prognos AG 2013

The study adds: “In the event that 30% of the international students remain in the country after completing their studies, the investment Germany makes on providing places of study could already be amortised after a period of five years. In Switzerland, on the other hand, the costs would only be covered after a period of around 17 years; this is because of the combination of high costs for providing places of study in Switzerland and the low tax rates in that country.”

For more on factors shown to be beneficial to increase the stay (retention) rates of international students, and on various countries’ strategies for this goal, please see our earlier article.