Demand for education and skills building in Pakistan

Access to education in Pakistan is low, with only 5.1% of 17-to-23-year-olds active in higher education, one of the lowest ratios in the world. In a nation of 180 million people, just one in 180 are enrolled in a university, compared to one in 33 in Canada. Pakistan is the world’s sixth-most populous nation and is predicted to grow to 285 million people by 2060. Two-thirds of the country’s population are under the age of 30, and half are less than 20 years old as a previous ICEF Monitor article on this key emerging market highlights.

Although higher education spending in Pakistan was due to increase by almost 23% in 2013, the demand for higher education greatly exceeds the supply and this continues to fuel the need for study abroad. As the demand cannot be met in Pakistan, “the private sector, students, and their parents must work together to find innovative solutions for securing higher education opportunities for Pakistani students,” urges Dr Murtaza Haider, Associate Dean of Research and Graduate Programmes at the Ted Rogers School of Management, Ryerson University. 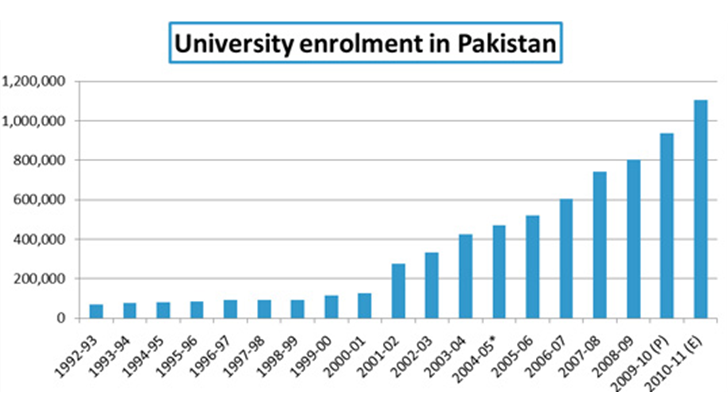 OECD figures from 2011 show that 49,000 Pakistani students were enrolled in higher education programmes abroad in 2011. International students from Pakistan studying in the United States were numbered at 4,600 in 2011/12 and rose to 4,772 in 2012/13, a 3.7% change according to Open Doors data from the Institute of International Education (IIE).

This recent modest increase compares to a previous peak of 8,644 Pakistani students in the US in 2001/02, a number that has declined in the years since the 9/11 attacks of 2001. More broadly, however, Pakistan remains a significant source of international students for institutions in US, Australia, Europe, and Asia.

Unlocking the talent of millions of young people entering the workforce is one of the greatest challenges facing Southern Asian countries. The importance of education and training in this process has been recognised by governments and a recent report for the British Council by The Economist Intelligence Unit (EIU) notes improved participation rates for primary and secondary education across the region.

Most policymakers in the region, the report notes, recognise that “economic success and social cohesion can be brought about through greater economic prosperity, more education and greater equity,” but that the policy framework and “the infrastructure of opportunity lags behind the policy drivers.”

The EIU also highlights the importance of aligning skills training with national policy directives – indeed for many Southern Asian countries migrant labour is a significant pillar due to the economic gains derived from remittances, which are still a vital source of income and foreign exchange in the countries of the region. A fundamental aspect of the skills agenda for countries including Pakistan, India, and Sri Lanka is training workers in the healthcare, construction and domestic services sector to “compete in the increasingly competitive global markets.”

On the plus side, with a projected one million new workers entering the labour force every month through 2033, the region is heading towards a “demographic dividend” that could be greater than the one realised by China in the 20th century.

If the region’s skills training and education needs can be met, this demographic spike offers the potential for tremendous gains in economic growth, employment generation, and poverty reduction.

However, widespread youth unemployment, if left unchecked, risks a lost generation in the South Asia, with the subsequent risk of alienation or radicalisation. Unemployment and underemployment remain a reality for younger Pakistanis, even with an increasing number of educated young workers entering the workplace. As a result, policymakers are giving a greater focus to identifying and addressing skills gaps in labour markets.

The EIU report finds that the region is lacking nearly all of the qualified graduates (an estimated shortfall of 96 million against a projected requirement for 100 million trainees) it will need to help drive economic growth in the decades ahead.

Peter Upton, the British Council’s director in Pakistan calls for a ‘leap of faith’ towards a much-needed, region-wide strategic alignment to prevent a skills crisis in South Asia. He adds:

“Neither government nor the private sector can solve this issue – it requires a leap of faith by both sectors working together on a scale not yet attempted. It demands a radical approach to delivery, flexible routes for progression and learning, enhanced quality assurance and sustained investment from public and private sector”

“This could be a ‘win win’ outcome but at the moment the private sector is responding to demand in an episodic manner and the public sector is following traditional models that are not highly valued. The leap of faith calls for both sectors to work collaboratively in a new partnership that can propel the region to the next stage of economic development and prosperity.”

This entry was posted in Asia, Higher Education, Most Popular, Pakistan, Regions, Vocational.