Test everything: the business case for A/B testing online

Khan Academy had a question. The non-profit had recently introduced a “sneak peek” feature into some of their online lessons. The feature was meant to encourage students to continue the lesson by giving them a preview of what they would soon learn. However, the user response to the new feature was mixed: some liked it, others seemed confused.

Khan Academy was unsure about how to proceed and so they decided to measure more carefully how the “sneak peek” was working. For one week, they ran a 50/50 test on their website that used two different versions of the same web page. Half of the visitors saw the “sneak peek” feature and the other half didn’t.

After the week, they had a clear picture of how the feature was working based on real user data – through which it was clear (as shown in the graphic below) that the “no sneak peek” version of the page was converting at a rate nearly 30% higher than the version including the “sneak peek”. 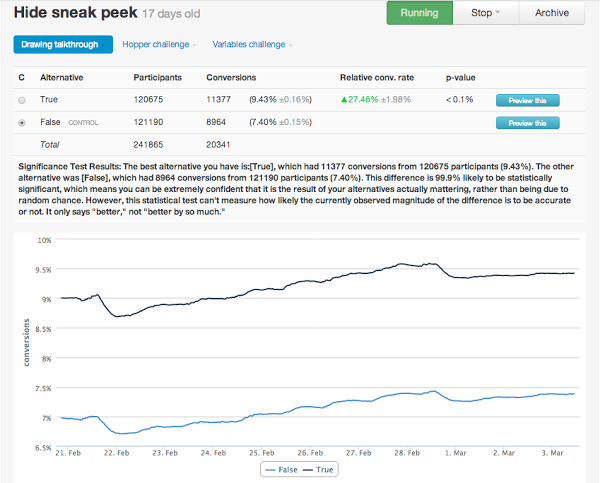 “In every measure, hiding the sneak peek resulted in greater learning outcomes,” notes a Khan Academy blog post. “Now we can remove the sneak peek talk-through with a degree of confidence, because we’ve seen that students are more likely to keep going if they don’t see it.”

The sneak peek case is an example of A/B testing, which the testing service Optimizely defines as follows:

“An A/B test involves testing two versions of a web page – an A version (the control) and a B version (the variation) – with live traffic and measuring the effect each version has on your conversion rate. Start an A/B test by identifying a goal for your company then determine which pages on your site contribute to the successful completion of that goal.”

A/B testing is a simple but powerful idea. It is an approach that relies on good data and good processes throughout and that, with those key building blocks in place, can be applied to just about anything you do online. You can test different copy or colours on your homepage or the placement of a key conversion button or the subject line in your email campaign – or, for that matter, pretty much any aspect of your online presence.

Wired magazine describes how A/B testing has become standard practice for some of the world’s leading online brands.

“Over the past decade, the power of A/B testing has become an open secret of high-stakes web development. It’s now the standard (but seldom advertised) means through which Silicon Valley improves its online products.

Using A/B, new ideas can be essentially focus-group tested in real time. Without being told, a fraction of users are diverted to a slightly different version of a given web page and their behaviour compared against the mass of users on the standard site.

If the new version proves superior – gaining more clicks, longer visits, more purchases – it will displace the original; if the new version is inferior, it’s quietly phased out without most users ever seeing it.

At the recent Travolution Summit in London, Graham Cooke, the CEO of the conversion optimisation firm Qubit, pointed out that, especially in the online space, marketing and IT teams are becoming increasingly integrated. 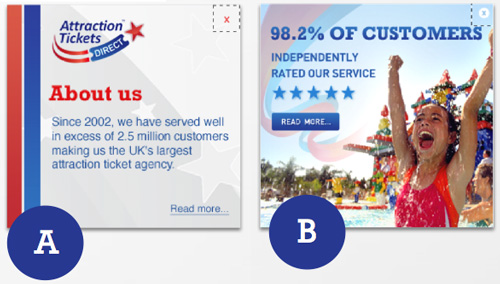 In the ATD case, the “B” advertisement converted at a rate 52% higher than the “A” control version, providing the company with a clear, data-based indicator of which ad was going to drive better results.

Marketers today have access to better and more efficient tools that support a greater range and number of A/B tests than would have been possible even a few years ago. These tools are helping to move routine, ongoing A/B testing out of the realm of the big tech brands and into the reach of virtually all online marketers.

Google is an example of a tech leader that has extensive experience with A/B testing. The search engine giant has now also released freely available tools – Google Content Experiments – that allow anyone to run similar tests. Content Experiments ties in to Google Analytics and allows marketers to test up to five variations of a page at any one time.

In its introduction to Content Experiments, Google makes the case for A/B testing as a basis for optimising websites and as a means of driving the conversions that are most important to your business goals.

“Let’s say you have a website where you sell house-cleaning services. You offer basic cleaning, deep cleaning, and detailed cleaning. Detailed cleaning is most profitable of the three, so you’re interested in getting more people to purchase this option.

Most visitors land on your homepage, so this is the first page that you want to use for testing. For your experiment, you create several new versions of this web page: one with a big red headline for detailed cleaning, one in which you expand on the benefits of detailed cleaning, and one where you put an icon next to the link to purchase detailed cleaning.

Once you’ve set up and launched your experiment, a random sample of your visitors see the different pages, including your original home page, and you simply wait to see which page gets the highest percentage of visitors to purchase the detailed cleaning.

When you see which page drives the most conversions, you can make that one the live page for all visitors.”

Beyond a free service like Content Experiments, there are also an increasing number of service providers specialising in A/B testing or other aspects of website optimisation, such as Optimizely, Qubit, Unbounce, and many others.

The interesting thing about such services is they often allow marketers to set up and run multiple tests without additional development or IT intervention on the websites they are testing, and this opens the door to more frequent and more extensive optimisation efforts.

However, putting effective processes in place to manage any such testing is a key step. A recent Marketing Sherpa survey of marketing executives found A/B testing is a powerful window into customer behaviour once solid management processes are in place.

“Overall, 47% of marketers said they use website optimisation and testing to draw conclusions about customers.

However, 75% of strategic phase marketers – those who do have a formal process with thorough guidelines routinely performed – use testing to learn about customer behaviour.”

In a recent post on the Harvard Business Review blog, Wyatt Jenkins, a vice president at Shutterstock, sets out some important tips when drawing up your testing processes.

Mr Jenkins also offers an extended set of tips on his personal blog to build on the best practices in his Harvard Business Review post, and we highly recommend his extended post for further reading on the subject.

When we are talking about conversion optimisation and A/B testing, what we are really talking about is creating a culture of experimentation in the marketing effort. A/B testing is not a fix for every business problem and it is especially not a basis for determining major innovations or shifts in strategy. However, conversion optimisation is an important factor in driving results for many marketers – one that is best understood as a process of incremental change and continuous improvement.