Student retention is a vitally important topic for recruiters and education administrators alike. The business case for improving retention and completion rates is clear (see graphic below). However, an institution or a school’s effectiveness in managing retention is also increasingly seen as an important indicator of quality and commitment to student success.

The cost of student attrition, based on a survey of 100 UK universities. Source: XMPro

We have written extensively on the topic previously, most recently in a feature on predictive modelling as a means to improve student selection and retention. And, in the first quarter of this year alone, we now see a number of new studies with some important findings on boosting retention and completion rates.

The first, by CK Kwai, director of international programmes at the University of Maine, looked at the factors that influenced retention of international undergraduate students at two university systems in the US Midwest. The study was wide-ranging and explored issues of academic performance, integration into campus life, and the students’ academic and personal backgrounds.

As The Times article notes: “Just three of the factors that Mr Kwai tested had a statistically significant and positive effect on student retention:

That two of the factors were academic is significant, Mr Kwai said, since it suggests that good early academic advising could improve international student success. Regarding campus employment, Mr Kwai imagined that having a job could make a student feel more a part of the institution.

Half of the staff respondents to the Di Maria study indicated they felt unprepared to work with international students. 64% reported their offices had not taken any specific steps to accommodate the needs of foreign students, and 90% of respondents said they wanted more training to support their work with visiting students.

The Kwai and Di Maria studies are significant for a couple of reasons:

These very points are strongly reinforced in a further study released earlier this year by the Education Trust. The report, Learning from high-performing and fast-gaining institutions: Top 10 analyses to provoke discussion and action on college completion, is a remarkably clear and practical examination of the student performance analytics practices at eight US universities.

Each of the institutions in question has achieved dramatic gains in retention and completion. The report highlights the key aspects of student performance that these institutions have learned to measure, and describes in some detail how they do it:

“To save leaders at other campuses from having to invent an initial set of analyses for themselves, we’re sharing 10 of the analyses that leaders at these eight institutions (and others) found to be particularly powerful in galvanising attention and action,” note the report authors.

For each analysis, we provide its inspiration, process, and insights. Where possible, we identify subsequent interventions made in response to insights arising from relevant analyses and provide information on the effectiveness of these interventions.” 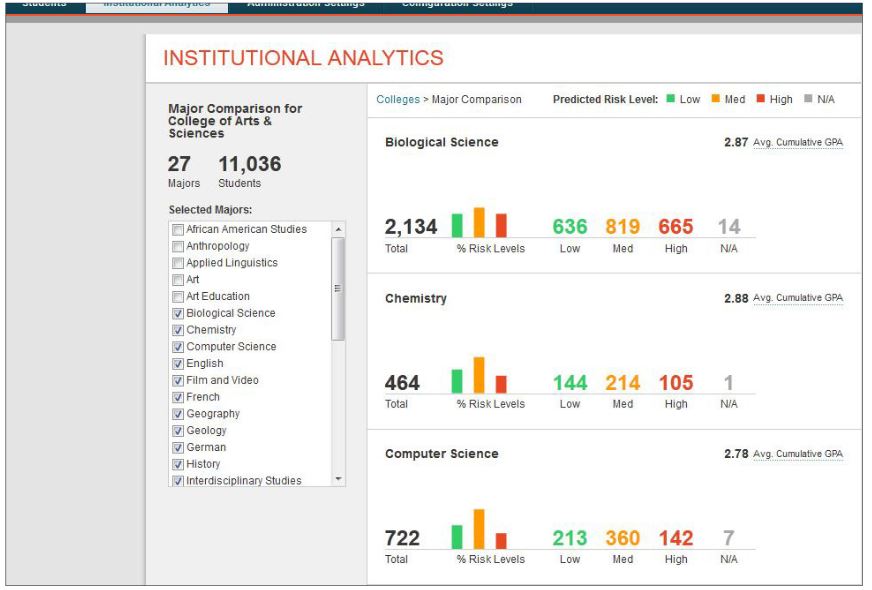 Aside from the practical guidance and detailed examples provided in the report, the Education Trust guide also aims to provide some high-level takeaways – that is, the key factors that were present across the eight universities that allowed them to make real progress on boosting student completion rates:

“Among the most important is the role of campus leadership – including the president but especially the provost – in helping to make student success a high, institution-wide priority. But close behind that is the early and ongoing use of data in critical tasks along the way, from the initial effort to galvanise a sense of urgency about the problem of student attrition to ongoing efforts to design and test interventions.”

The report also stated that “in most instances, these institutions employ sophisticated student success data management systems that facilitate ongoing enquiry and essentially automate much of the work, such as detailed monitoring of student progress with immediate alerts given to both students and their advisers when key milestones are missed.”

Staying ahead of the [retention] game is essential; a 2013 survey of 100 universities in the UK found that 41% of “at risk” students – that is, students at risk of not completing their intended programme of study – were identified too late for the university to resolve the students’ issues.

The Education Trust report is a compelling counterpoint to the UK survey and an important review of some of the emerging best practices in this area of data analytics. It illustrates the extent to which good data on student performance can be used to intervene to assist students at risk, but also to improve systems and services for students across the institution or school.