On the eve of the Sochi Olympics, storm clouds gathering for Russian economy

In just two days, the 2014 Olympic Winter Games will open in Sochi, Russia and the world will once again come together under the Olympic ideal of Citius, Altius, Fortius.

Russia has emerged as an important player in international education in recent years. The Organisation for Economic Cooperation and Development (OECD) ranks the Russian Federation as a leading source of international students in Europe, after only Germany and France, but also as an increasingly important destination for internationally mobile students as well.

Student demand remains strong. The government is making moves to attract more foreign students to Russia. And there are clear indicators of important labour market gaps that will largely be resolved only through better access to high-quality education.

But can Russia continue to soar Faster, Higher, Stronger in 2014 and beyond? A softening domestic economy and conflicting policy directions will likely have much to say about how the Russian education market develops for the years ahead.

Russia’s Minister of Economic Development Alexei Ulyukayev drew international attention late last year when he indicated the country’s economic growth would likely not exceed 2.5% per year through 2030. Against a broader backdrop of continuing economic challenges in Europe, the Russian economy fell off sharply in 2013. Gross domestic product grew by just over 1%, the lowest rate of growth since the country’s most recent recession in 2009 and a notable drop from the 3.4% growth registered for 2012. 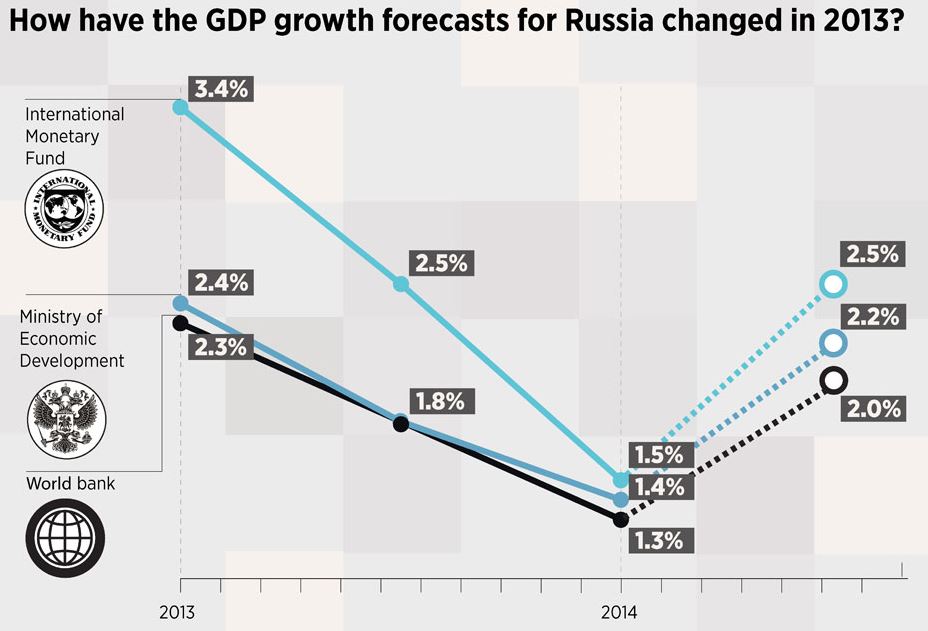 Source: Russian Ministry of Economic Development, Russia Beyond the Headlines

A recent Bloomberg survey of economists forecasts the probability of another recession in Russia within the next year at 33%, and attributes the recent slowdown to very low levels of investment within Russia:

“Russia is struggling amid meagre growth in investment, Minister Ulyukayev said. Fixed-capital investment rose 0.3% from a year earlier in December after a 0.2% increase in November and a 1.9% drop in October.”

Russian President Vladimir Putin has clearly stated that domestic factors are at play in the slowing Russian economy, especially low levels of investment and poor labour productivity. The president expanded on this point in a December address at the Kremlin and pointed to better-quality education as an important enabler of improved productivity and economic growth:

“In key indicators such as labour productivity, there is a two-to-three-fold gap between us and the developed economies. We must work hard to close this gap.

To do this, we must make full use of all new development factors. What are these factors? We all know them well. They include high quality professional education and a flexible labour market, a good investment climate and modern technology.”

Needless to say, any softening of the Russian economy will eventually impact demand for study abroad. Relative currency values are an important early indicator in this respect and the Russian currency is off sharply this year, raising speculation that more Russians may prefer to limit travels abroad in 2014.

The Russian news agency RIA Novosti reports, “The ruble has depreciated by more than 6% this year against the euro-dollar currency basket used by the Central Bank. It is now at a historic low against the euro and is at its weakest level against the dollar for five years… Foreign trips will inevitably get more expensive. A lot will depend on how long-lasting this [weakening ruble] trend is.”

University World News is reporting this week on stringent new academic requirements for foreign students in Russia but notes even so that,

Russia has become a more popular destination for international students in recent years, in part because of the strong cultural and academic traditions in the country and in part because of its affordability for visiting students.

The important relationship between the country’s education system and its economic prospects was further underscored by a global labour market study released late last year. In the introduction to the Hays Global Skills Index, the study’s authors set out its objective to “highlight the efficiency of the skilled labour market around the world, seeking to identify imbalances between the supply of skilled labour and the demand for those skills among employers.” The authors note as well that it is “critical for education authorities and businesses to work closely to ensure educational systems are designed to provide students with the skills that their future employers require.”

The Moscow Times sums up Russia’s 2013 Hays Index ranking in reporting, “The Russian education system is increasingly unable to meet the demands of the country’s labour market and shows little ability to fill vacancies in high-skill industries.”

“The education system struggles to produce an adequate number of specialists across industries and functions, while wage pressure in high-skill industries, which is already at a dangerously high level, continues to rise,” adds Alexei Shteingardt, managing director of Hays Russia. “It is not surprising therefore that only a half of university graduates pursue a professional career in their relevant field of study.”

These are the factors that will tip the balance in the Russian market in the years ahead. On the one hand, the country’s economic challenges are profound and persistent and that will be a challenge in terms of demand for study abroad for the foreseeable future. On the other, the way forward for Russia rests in large part on the ability of Russian students to access high-quality education.

This compelling need – both for individual students and families but also for Russia’s broader economic and social interests – may well offset the country’s negative economic trends and continue to drive demand for international study going forward.