Tell the truth: did you just feel an involuntary twinge of anxiety? Well, you are not alone.

While the landscape of entrance and qualifying exams is always shifting – as exam content and structure evolves over time (see below for updates on coming changes to the SAT and CAE exams) or as exam systems in a given country undergo reform – some aspects of the exam experience remain constant.

Any standardised examination is subject to questions of effectiveness, fairness, and even impacts on student welfare. In Thailand, for example, no less a figure than Education Minister Chaturon Chaisaeng has raised concerns about Thai universities’ reliance on frequent rounds of qualifying examinations for admissions, and, in particular, about the systemic disadvantage for poorer families who are less able to pay the cost of sitting the exams or for the additional tutoring that they often require.

Meanwhile in the US, new trend data for the SAT college admissions exam continues to reveal that test scores vary significantly by racial and ethnic group. Inside Higher Ed reports:

“An analysis of the data by the National Center for Fair & Open Testing (a group that has long been critical of the SAT) found that since 2006, the combined Asian average score is up by 45 points, while the average scores of all other groups are down – by between 6 and 28 points. FairTest, as the group is known, has long argued that testing does not narrow gaps or promote real reform in American education.”

Japan has its own questions about the effectiveness of a single, high-stakes admissions exam. Reports suggest that reforms are under consideration there that would see the National Center Test for University Admissions replaced by a series of achievement tests, and also by a greater reliance on recommendations and student interviews in the admissions process.

And, finally, The Telegraph reported recently on the growing awareness of the impact of standardised exams on the health of students. They quote British psychologist Tanya Byron on her experience in working with young students:

“I have a clinic in London where I see children who go to some of the best schools in the country and are shattered by a fear of failure which is driven by a desire for success and achievement [from parents and schools].”

These broader social and systemic pressures, combined with the personal impacts of standardised testing, lead to a profound influence on admissions patterns and student mobility.

For example, we reported recently on a report from the British Council which notes that “Turkish students looking to study overseas may be motivated by the strong competition for domestic university places and pressure of the YGS exam.” (The YGS, or Yükseköğretime Geçis Sınavı, is the standardised test for higher education admissions in Turkey.)

Similarly, surging demand in Hong Kong for the SAT is driven in part by large numbers of Chinese students looking for an alternative to the gaokao, China’s ultra-competitive national college entrance exam.

As that surging demand illustrates, shifting patterns of exam-taking can also foreshadow important trends in international student mobility. Dr Rahul Choudaha recently reported on multi-year data for GRE test takers in international markets. The GRE, or Graduate Record Examination, is a standardised test required by many graduate schools in the US, and the GRE test data shows dramatic growth in GRE testing in two of the world’s most important education markets: China and India. 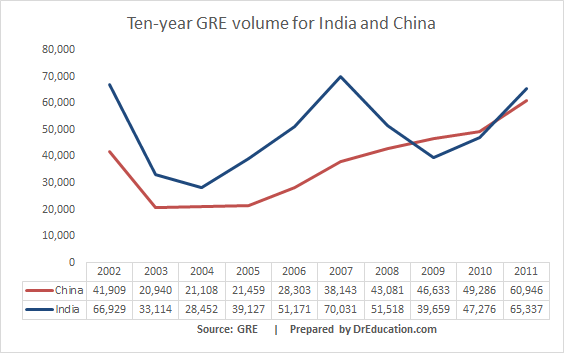 “A sharp change in numbers from either of these markets can significantly influence enrolment statistics,” says Dr Choudaha. “ [The] number of GRE test takers from India has increased by 38% in 2011 as compared to 24% for China… Even with this growth, India is still lower than its peak volume of 70,000 pre-recession and almost same as its volume in 2002. In contrast, China touched its all time high of nearly 61,000 test-takers in 2011, which is almost 45% higher than 2002 volume.”

Dr Choudaha notes that the relative volatility in GRE testing volumes in India reflects the greater price sensitivity in this key market, whereas the steady growth in GRE candidates in China reflects the country’s position as a major growth market over the past decade and more.

There are important questions swirling around both markets these days: will demand for study abroad in India be blunted by the depreciating rupee? Has Chinese demand for graduate programmes abroad begun to taper off? Test data can be an important indicator of these broader mobility trends.

Exam changes on the horizon

For this reason, and for their impact on the admissions process and prospects for individual students, material changes in major exams are always a subject of interest.

Reforms are underway in a number of jurisdictions – Thailand and Japan as noted above – and also in Wales. Elsewhere in the UK, Education Secretary Michael Gove has sweeping reforms planned for the national curriculum, GCSE exams and A-levels, but the changes will not be easy to implement and are facing delays.

In addition, there are changes coming to two major exams that are on the radar of many recruitment professionals these days.

A long-planned evolution of the SAT was on the table recently during a rare appearance by College Board President David Coleman at the annual meeting of the National Association for College Admissions Counselling (NACAC) in Toronto, Canada. As in previous reports of the pending changes, President Coleman indicated in Toronto that the forthcoming SAT would be more closely linked to high school curriculum, “less coachable,” and that test takers would likely see changes to the essay portion of the current test.

Cambridge English Language Assessment, meanwhile, has announced more specific plans for coming changes to its Cambridge English: Advanced (CAE) exam for 2015. Each year, the exams are taken by more than four million people in over 130 countries. Among the anticipated changes:

More broadly, some observers are predicting a continuing shift to online examinations, and away from pen-and-paper exams in the years ahead.

In light of this trend and in response to increased efforts to curtail cheating, IELTS (and its partners the British Council, IDP: IELTS Australia and Cambridge English Language Assessment) have announced that biometric systems to verify the identity of test takers have been implemented globally. The new IELTS security protocols now incorporate fingerprint scans in jurisdictions where this is permitted, along with high resolution photography. IELTS test results are trusted by more than 8,000 education institutions, governments, professional registration bodies and employers around the globe to provide accurate and reliable measurement of English language proficiency.

We have reported previously on biometric testing used in MOOC platforms, and these developments – along with persistent demand for improved efficiencies in test administration and marking – will no doubt combine for a further dimension of change and a larger role for new technologies in examinations for tomorrow’s students.