President Obama calls for new rating system for US colleges

President Obama outlined a plan last week to establish a new rating system for US colleges, and announced as well his intention to eventually link federal student aid programmes to the new rating scheme.

The announcement appears to have been sparked by the Obama administration’s interest in rising college tuition fees. A White House background brief released in conjunction with the President’s speech noted:

“The average tuition at a public four-year college has increased by more than 250% over the past three decades, while incomes for typical families grew by only 16%, according to College Board and Census data.”

The Wall Street Journal reported on the basic shape of the proposed rating system:

“The President called for rating colleges before the 2015 school year on measures such as affordability and graduation rates – ‘metrics like how much debt does the average student leave with, how easy is it to pay off, how many students graduate on time, how well do those graduates do in the workforce,’ Mr. Obama told a crowd at the University at Buffalo, the first stop on a two-day bus tour.

‘The answers will help parents and students figure out how much value a college truly offers,’ he said.”

Following the establishment the new rating scheme, the President will then ask the US Congress to distribute federal financial aid funds based on the new college rating scores by 2018 – with the idea that students at higher-ranked institutions would be eligible for more substantial grants or more affordable student loans.

“It is time to stop subsidising schools that are not producing good results,” said Mr. Obama.

The US Department of Education will hold public hearings to develop the ratings before fall 2015, and the President’s announcement will likely now set the stage for a vigorous debate between administration officials and educators as to how such a ratings scheme should be designed.

For the moment, the plan has drawn a cautious endorsement from many educators and observers, in part because of the President’s willingness to set rising US college tuitions in their proper context (that is, to acknowledge that they are partly a function of declining public funding for US higher education) and also because of the proposed scheme’s stated ambition to recognise the breadth and diversity of the US college system.

“The measures will be designed to break higher education into its many differing segments,” reported Insider Higher Ed. “That means community colleges won’t be measured against Ivy League institutions.”

A post on the blog The Quick and the Ed seemed to sum up the early view of many observers in the US:

“Done well, this is a step in the right direction. Historically, the federal government has mostly provided the same funding to students regardless of what college they attend (and in some cases the government provides more funding for students attending more expensive colleges). But all colleges are not the same, and it is perfectly reasonable for the government to prioritise government funding for those colleges that are more successful in achieving the goals the government is providing funding for.

Of course, the devil is in the details.”

“The creation of [the new rating system] will be enormously complicated as well as controversial,” noted Inside Higher Ed. “Many observers said the President’s plan – which seeks to fold all sectors of higher education into the same sort of regulatory regime the White House has pushed with for-profit colleges and vocational programmes at community colleges – will have a big rhetorical impact on the debate over accountability in higher education. It could also substantially increase the federal government’s presence in overseeing how colleges do business.”

Needless to say, any such rating system for US colleges would not only be referenced by American students, families, and policy-makers but also by students and other stakeholders abroad. In this sense, this new US effort to rate its institutions joins a larger, global debate about the value and application of university ranking schemes.

UNESCO has done some important work on this question and commented recently:

“International university rankings affect public policy and the choices of students and their families. Rightly or wrongly, they are perceived as a measure of quality and so create intense competition between universities all over the world. But are they doing more harm than good? … Of the world’s 17,000+ universities, only 1% are the focus of the ‘world university rankings’ published by three of the most prominent ‘ranking houses’. Although varied in many respects, the top 200 ranked schools tend to be older (200+ years) establishments, focusing mostly on scientific research, with around 25,000 students and 2,500 faculty; and annual budgets exceeding US $2 billion.”

These observations serve in part as a preamble to a new UNESCO report on international ranking schemes, Rankings and Accountability in Higher Education: Uses and Misuses. The report provides an in-depth examination of the methodologies of major ranking systems as well as a critique as to their limits and application, and is a highly recommended resource for readers with an interest in further research in this area. 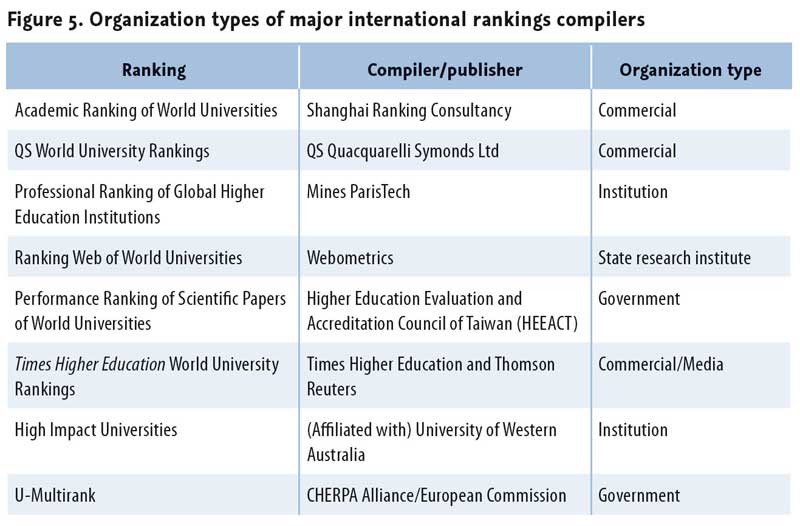 An illustration from UNESCO’s Rankings and Accountability in Higher Education: Uses and Misuses summarising the major international university ranking schemes.

The proposed US rating scheme now effectively becomes part of this global discussion as to the design, limits, and appropriate usage of any such institution-wide rankings. It will be fascinating to watch how the US college rankings evolve in the years ahead, not to mention how we all come to understand and use them.