“With 7 billion people living in the world, new findings from a Nielsen global survey revealed that when it comes to core fundamental lifestyle values centred on family, education or religious aspirations, we are more alike than we are different.”

So begins New Wealth, New World: How and Why We Shop Around the Globe, one of two recent consumer studies released by Nielsen containing interesting consumer insights for education marketers.

The report is based on the Nielsen Global Survey of Consumer Shopping Behavior, a survey of more than 29,000 online respondents in 58 countries and Nielsen’s first poll on lifestyle values.

New Wealth, New World describes a range of widely held values for consumers around the globe, including the importance of spending time with family (80% of global respondents ranked this as an important value), family planning (77%), the influence of women over important decisions in the household (76%), and, in a key finding for ICEF Monitor readers, the importance of acquiring a higher education (78% of respondents).

The percentage of respondents who somewhat or strongly agree on the importance of education. Source: Nielsen

In its coverage of the report, Reuters quoted James Russo, senior vice president of Global Consumer Insights for Nielsen:

“The importance of a higher education really came to the forefront… Education is the engine for growth.”

While 78% of consumers worldwide noted education as a priority, Reuters also noted some interesting regional variations:

New Wealth, New World also provides some interesting, broad insights with respect to consumer behaviour, notably how consumers in different markets respond to price promotions and special offers. We interpret these findings carefully with respect to high-involvement, high-investment decisions such as study abroad but nevertheless, the Nielsen study does provide an interesting sense of behaviour and context for consumers worldwide.

“Economic realities prevailed around the world, and overall, there was global alignment on attitudes about the need for deals and promotions. Price was the most important concern among 65% of global respondents; 6 out of 10 were aware of promotions and discounts (59%) and believed products with free gifts were good incentives (58%). With the exception of Greece, developing countries (in a balanced representation of the regions) comprised the list of countries that responded most strongly in favor of receiving free gifts.”

These findings echo previous reports from the British Council which recommend education providers experiment with gift boxes of language courses for teens or adults, particularly when marketing to Italians.

For more tips on pricing and promotions, please see our previous articles: “Top trends in strategy and pricing for educational travel providers” and “Pricing strategy in the language travel industry.” 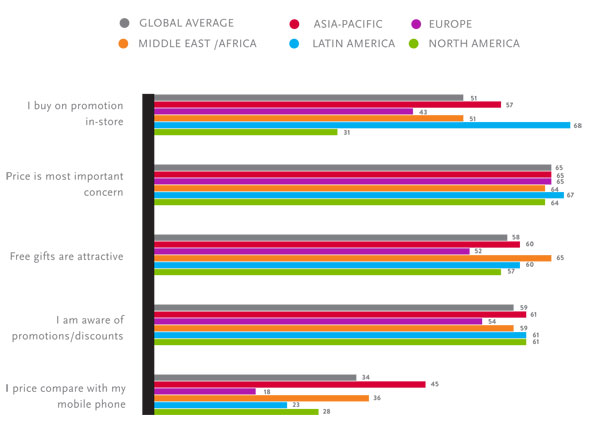 The percentage of respondents who somewhat or strongly agree on the importance of gifts and promotions. Source: Nielsen

The findings in New Wealth, New World are expanded through a second Nielsen study released this summer: Consumer Confidence: Concerns and Spending Intentions Around the World. The Nielsen model reports on consumer confidence levels using a baseline of 100 to indicate degrees of optimism and pessimism, and the study finds that consumer confidence is on the upswing globally:

Nielsen notes that while more than half (55%) of global respondents still believed they were in a recession in the second quarter of this year, this was the lowest level reported in two years. In fact, this so-called “recessionary sentiment” has declined this year in all global regions except for Latin America.

The study also found that, on average, discretionary spending intentions – for such items as clothing, holidays/travel, entertainment, and technology – increased around the world in the second quarter.

The percentage of respondents who believe their country is in an economic recession. Source: Nielsen

Consumer Confidence is again based on a global survey, the Nielsen Global Survey of Consumer Confidence and Spending Intentions, designed to measure consumer confidence, major concerns, and spending intentions among respondents from 58 countries. Dr Venkatesh Bala, chief economist at The Cambridge Group (a division of Nielsen) summed up the current global context for consumer confidence as follows:

“While confidence in Europe remained largely in a holding pattern as financial conditions stabilised, perceptions about jobs, personal finances and spending intentions increased in the world’s three largest economies, US, China and Japan, which is having a beneficial effect around the world. However, concerns remain that macroeconomic events, such as too sharp a rise in interest rates, can impair the consumer recovery including lowering the demand for home purchases and spending on big-ticket items.”

Please see the complete Nielsen report for more detailed findings on individual markets around the world.